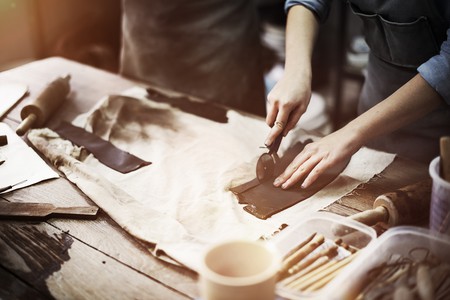 Napoleon Abueva’s long and fruitful career as a sculptor has lent him the official title of the National Artist of the Philippines, and the unofficial recognition of being the father of contemporary Filipino sculpture. Abueva’s influence on Filipino art has been immense, and his skill as a sculptor spans materials as varied as wood, bronze, coral, and stone. We explore the life and work of the Philippines’ most talented and recognized modern sculptor. 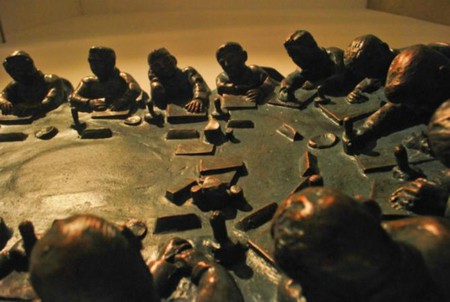 Napoleon Abueva, The Philippines and the Spirit of Apec, Fiberglass, 157×75 cm, Artist’s Collection | Courtesy the Metropolitan Museum of Manila and the Artist

Napoleon Abueva, Father of modern Filipino sculpture, the National Artist of the Philippines – and the youngest artist to receive the honor – is credited with leading the way for the nation’s sculptors, and serves as a living legend of the Filipino art world. His titles and distinctions are as numerous as his artworks, and as impressive as his prowess as a sculptor.

But when Abueva, born on the Philippine island of Bohol in 1930, was growing up, he had little access to the art of sculpture. Reportedly, the only sculpture in his house was a bust of José Rizal, a national hero, poet and political activist living in the 19th century – an apt reminder of the country’s centuries-long struggle for independence in a house owned by Abueva’s parents, both of whom were involved in politics. 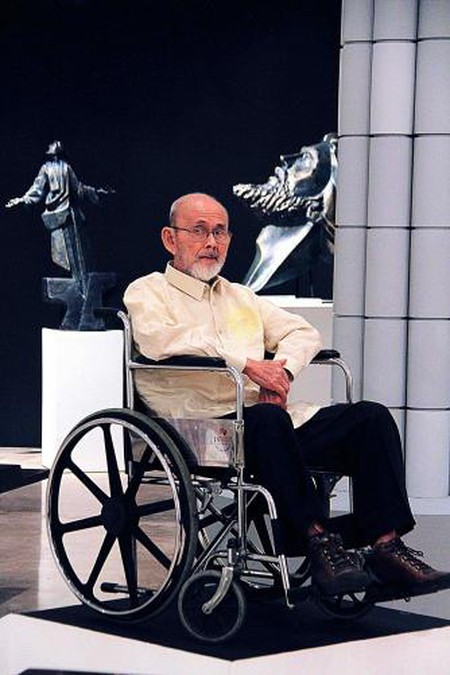 It was only later, when Abueva was a schoolboy, that he first noticed the sculptural quality of clay and began to mold it into the shape of carabao, or water buffalo common in the Philippines. These first experiments with clay soon turned into a fully fledged dedication to the visual arts as Abueva began to collect various scholarships throughout the Philippines and abroad. At a pivotal point of his development as an artist, he was granted a scholarship at Harvard University.

At that point, Abueva could have realistically pursued an entirely different route, choosing a career in the United States over a less secure situation back in his homeland. But his roots called him back to the Philippines, and he followed them: he went back to teach at university, and share his skill with Filipino art students. Back then, and still now, what guides him are the unshakable beliefs that art should be accessible to everyone, and that basic education must be accompanied by an education in culture: ‘that’s the best thing in life – to be taught about art early’.

Abueva’s own style is at the same time incredibly varied and instantly recognizable – many of his sculptures that now sit in public places in the Philippines and abroad convey a sense of realism with their intimately physical presence, lifelike forms and evocative gestures. For these, Abueva gets his inspiration from a range of sources, including popular mythology, history and day-to-day life. It is this aspect of his work that betrays an ongoing affinity with the work and style of his mentor, Guillermo Tolentino, whose oeuvre was monumental in its reverence for the classical school and ancient Greek sculpture. 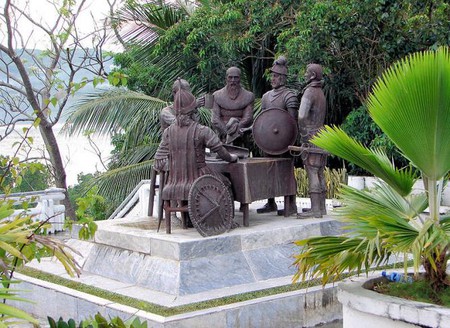 But, when Abueva polished his stones to create works that, at first, resembled those of Tolentino’s, he also polished his own vision of sculpture and fine-tuned a style that jumps from abstraction to representation. While his realistic figures represent the better known and more widely seen aspect of his work, Abueva’s abstract sculpture demonstrates an active engagement with the ambiguity of representation and testifies to his talent. Indeed, perhaps his morphing styles and techniques, which span wood, metal, stone and many other media, retain their spirit of authenticity because of the artist’s fundamental belief that “a good piece of art transcends any period and has perpetual value.” The medium, style and technique matter little, compared to an underlying sense of beauty or goodness. 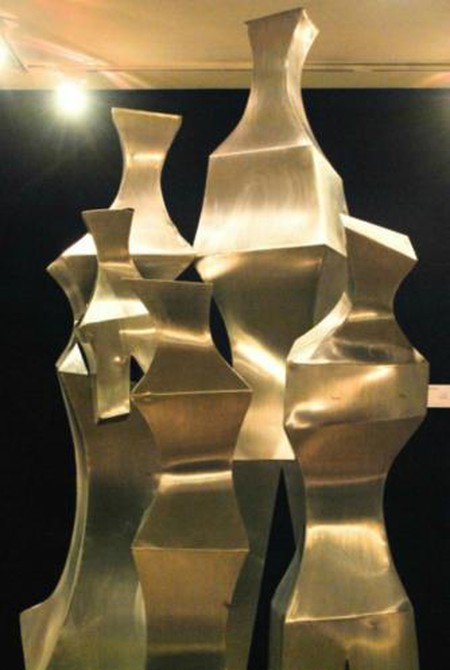 The theme of motherhood, or the archetype of the mother, is present throughout his oeuvre, and serves as a good point of comparison for his varied techniques. One of these, a bronze statuette, represents a mother kneeling, and raising her child high up above her head in a gesture of exaltation, emboldened still further by the natural shine of the material – the scene is resplendent and conveys the pride of motherhood and relationship between mother and child in all their glory.

Childbirth (2001), another realistic piece made from bronze, is an honest and simple representation of labour, to the point where its straightforward frankness becomes almost uncomfortable to the viewer as the woman in the sculpture holds her newborn in her right hand, the left still holding on to the umbilical cord. On the other hand, one of Abueva’s most widely known sculptures sharing this theme, titled Mother and Child (1960s), is a confident example of Abueva’s whimsical departures from Realism.

The position represented is strikingly similar to the bronze statuette of a mother holding her child above her head, but the style and form are completely different. Roughly hewn from stone, the sculpture combines straight lines (legs, arms and feet) with curves (buttocks, breasts, back), conveying a powerful voluptuousness and sensuality, both of which hint at the natural beauty of childbirth and motherhood. Inherent to the piece is a seeming nod towards the work of Romanian Constantin Brancusi, and more specifically his famed The Kiss (1907), which similarly combines the sexual nature of the curve with contrasting straight lines. Abueva’s admiration for Brancusi is a widely known fact, and shines through much of his abstract work. 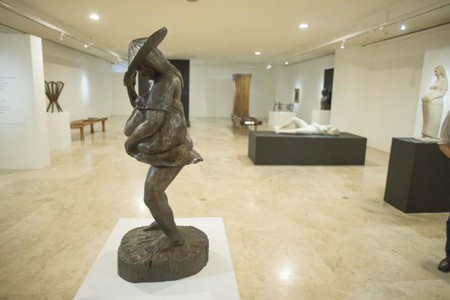 Abueva: The Power of Form, Exhibition view | Courtesy the Metropolitan Museum of Manila

But Abueva’s sculptures, in addition to representing his unique vision, frequently seem to serve a specific function. Somewhat humbly, he insists that “sculpture is actually manual labor,” and infuses much of his work with a practical purpose. Much of it stands proudly, almost heroically, in public places around the country, and even in the UN Headquarters in New York. The surprising Nine Muses of the Arts, located at the UP Diliman campus, is a tribute to the arts, from the traditional media of painting and music to new media: cinema and computer art. The function of his public works lies in the way they inspire respect for previous generations and remind the viewers of the past, of heroism, of the moments that made history, while keeping a watchful eye over the present. 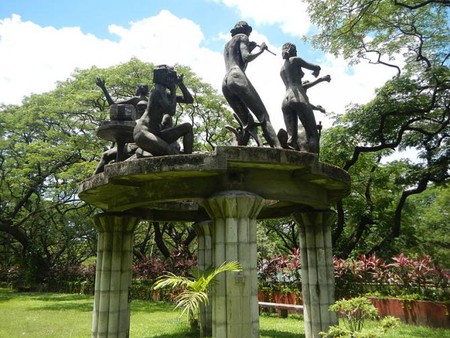 Abueva’s career spans over six decades, and he shows no sign of slowing down. In an interview he once said that “the artist must possess the inner drive, passion, and loneliness of a long distance runner to go very far.” This drive is certainly something that has guided Abueva throughout his career, and helped him revive what Cid Reyes, an art critic and author of a book about Abueva, calls “a neglected art form” in the Philippines.