How Did the Chocolate Hills in the Philippines Get Its Name? 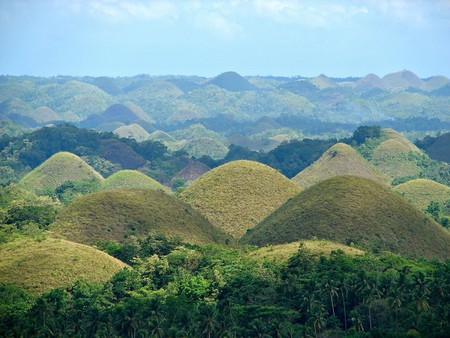 One, if not the most, famous attraction in Bohol is the geological formation of more than 1,000 hills known as Chocolate Hills, a captivating sight year round. But beyond the mystery of its origin, which is even claimed to be impossible by some locals, there is one obvious question about the intriguing site: how exactly did Chocolate Hills get its name?

Despite the fun and exciting legends of the hills’ origins, the name is much more simple. When the country transitions from its usual tropical state to a dry season, the color of the hills makes an epic change from green to brown. According to locals and geographers alike, these now-brown hills resemble lumps of chocolate—more specifically, Hershey’s Kisses—as far as the eye can see.

Filipinos are rather fond of folklore, so there are a few mythical origins as to how the hills came to be. 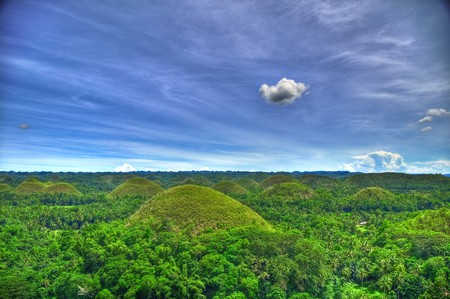 The main attraction of Bohol Island are the Chocolate Hills. These mounds turn brown during the summer, resembling Hershey Kisses, hence the name. The actual mounds are quite weird; if you go down to the base and have a look, these things simply rise from nowhere. Most normal hills usually have a gentle slope that starts them off, but these hills sit there on grounds which are completely flat, and they suddenly 'exist'. I found that very interesting and forgot to take pictures. It isn't know how they're formed, but they're thought to be made of uplifted limestone containing lots of fossils, the surrounding area being flatter due to erosion over time. I also hear it rains here... -------------------- Local legends (gratuitously copied from Wikipedia) -------------------- Four legends explain the formation of the Chocolate Hills. The first tells the story of two feuding giants who hurled rocks, boulders, and sand at each other. The fighting lasted for days, and exhausted the two giants. In their exhaustion, they forgot about their feud and became friends, but when they left they forgot to clean up the mess they had made during their battle, hence the Chocolate Hills.[13][17] A more romantic legend tells of a giant named Arogo who was extremely powerful and youthful. Arogo fell in love with Aloya, who was a simple mortal. Aloya's death caused Arogo much pain and misery, and in his sorrow he could not stop crying. When his tears dried, the Chocolate Hills were formed.[18] The third legend tells of a town being plagued by a giant carabao, who ate all of their crops. Finally having had enough, the townsfolk took all of their spoiled food and placed it in such a way that the carabao would not miss it. Sure enough, the carabao ate it, but his stomach couldn't handle the spoiled food, so he defecated, leaving behind him a mound of feces, until he had emptied his stomach of the food. The feces then dried, forming the Chocolate Hills. The last legend is about a gl

One tells the story of two giants who threw boulders, rocks, and sand at each other for weeks while feuding over who was more powerful. When they reconciled, the giants forgot all about their battle, and the messy lumps they left on the ground became known as the famous Chocolate Hills.

Another story is a little more humorous: a town was pestered by a giant carabao who did nothing but eat the villagers’ crops and eventually relieved its load in the plains, which dried up and became the hills.

Yet another story takes a more romantic turn: according to legend, a giant named Arogo fell in love with a mortal who died, causing him to grieve for her endlessly. His tears dried up to be the glorious hills we know today.

Considering the variety of legends as to how the hills formed (which was the erosion of coral uplifts), it’s pretty lucky that “chocolate” is the name that stuck.