Exhilarating Ways to Experience the Great Outdoors in the Philippines 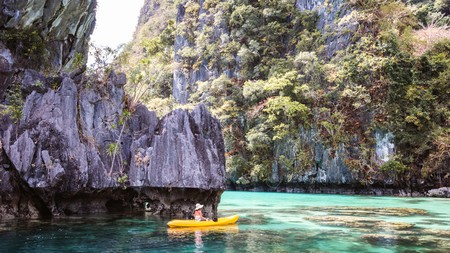 Of all the destinations currently available through our computer screens, one has emerged as the darling of the aspirational travel set – the Philippines. Vloggers in Siargao, Banaue, Bicol and Palawan draw thousands of viewers every week, who tune in to see trails winding past 2,000-year-old rice terraces, barrel-like waves crashing on powdery beaches and waterfalls tumbling into sapphire pools. For captivating natural beauty and white-knuckle adventure, there’s nowhere better. 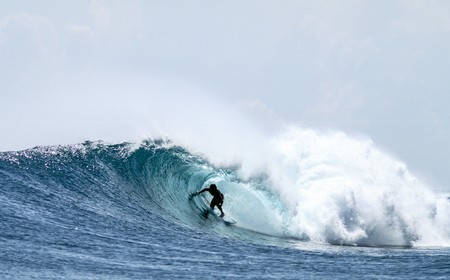 Hit the surf in Siargao

Siargao’s year-round waves attract adrenaline junkies of all levels for kitesurfing, paddleboarding and days-long surf schools. More cerebral adventurers will appreciate the homegrown coffee, as well as lessons in basket-weaving and Filipino cooking. Alternatively, jump on a motorcycle for a self-guided tour. There’s much to explore – from coconut palms encircling mangrove forests to rice paddies dotted with small villages. Finish with a trip to Tayangban cave pool, where you can swim through a cave aided only by torchlight, and emerge into an open pool, where you can cliff-jump from 7m (23ft). In the evening, head to Cev for Peruvian ceviche and its Filipino cousin, kinilaw – or to La Carinderia for negronis made from the marble-sized calamansi fruit endemic to the Philippines. Compensate for a night of overindulgence with a mango smoothie bowl at Shaka, overlooking the legendary Cloud 9 surf spot. 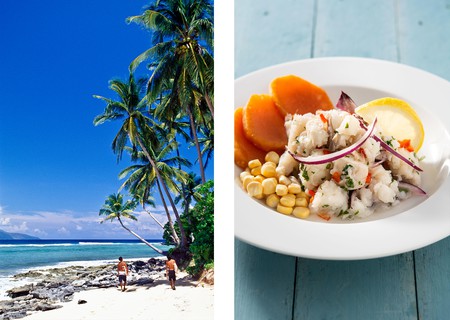 Step into Philippine history in Banaue

More than 2,000 years ago, the Ifugao people created the rice terraces of the Philippine Cordilleras, which would later be described by Unesco as “a living cultural landscape of unparalleled beauty”. Using basic tools, they carved a 4,000sqmi (10,360sqkm) network of stepped rice terraces into the mountains with a total length of 12,500mi (20,117km), or roughly half the circumference of earth. Today, this World Heritage Site is the Philippines’ biggest tourist draw. Evade the crowds by taking a multiday hike via Cambulo and Pula – remote villages where you’ll experience genuine Philippine hospitality. Pick up an English-speaking guide in Banaue, who will show you the safest path, pit stops for fuelling up with coffee and rice bowls, and places to spend the night. Drop by the Ibulao Bed and Breakfast to savour the taste of a home-cooked menu using traditional local ingredients. The place itself is an interesting work of art by physician owners Drs Roberto and Tess Kalugdan. On your return to Banaue, don’t miss dinner at Hagabi, whose owners, Ifugao natives Moises and Marissa Chog-ap, specialise in traditional cuisine such as Hagabi rice – tender marinated chicken with jasmine rice – and creamy vegetable and coconut curry. 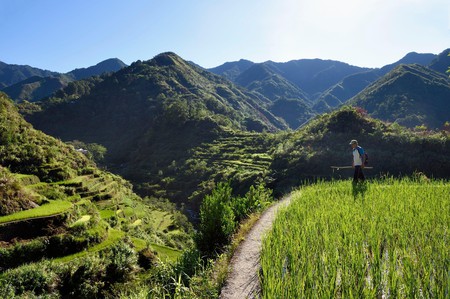 The Banaue rice terraces, around the village of Cambulo, are a Unesco World Heritage Site | © Hemis / Alamy Stock Photo

Get your adrenaline fix in Bicol

Known worldwide as the filming location for the US television show Survivor, this archipelago packs every adventure imaginable into the 4,660sqmi (12,069sqkm) it covers. Head straight to Caramoan Island to live out your Survivor fantasies – clamber up vertiginous limestone cliffs, learn to weave palm fronds or hack open a coconut with a machete. If you prefer a more modern take on adventure, fire up an ATV for a rip-roaring ride across the black lava fields of Mayon Volcano, the postcard-perfect cone that looms over the city of Legazpi. For cable watersports, head to the Camarines Sur (CamSur) WaterSports Complex for a 15acre (6ha) obstacle course that will challenge wakeboarders and waterskiers of all abilities. Bicol also offers peerless diving and snorkelling experiences. The Manta Bowl, accessible from Ticao Island, is where divers come to swim with manta rays, whale sharks, thresher sharks and even the occasional hammerhead or tiger shark. In Donsol, you don’t even need scuba gear to swim with whale sharks – these remarkable creatures come close enough to the surface that a snorkel is all you need. Don’t leave Bicol without trying Bicol Express, a coconut-rich stew with sautéed shrimp. Unusually for Filipino food, it’s extremely spicy. 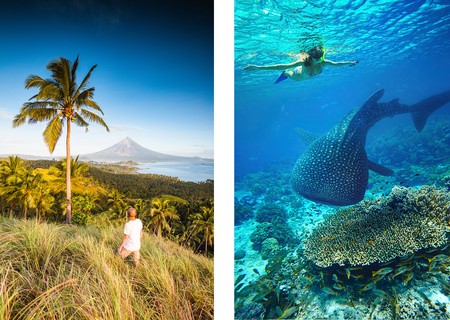 Once relatively unknown, Palawan is now tipped to snatch Halong Bay’s crown for most Instagrammable limestone karsts. Head up to Coron Town and jump on a bamboo-rigged bangka boat to see them – or even climb them – for yourself. But it’s what’s under the water that will truly amaze. In 1944, at the height of World War II, Coron Bay was the site of a devastating US Air Force attack, which destroyed 12 Japanese ships. These now form a captivating dive site, not just for the colossal wrecks but for the host of corals, fish and sea turtles that call them home. Between dives, fill up on seafood such as grilled samaral fish, milky kibao clams and tanigue – Spanish mackerel – with garlic and calamansi. Tranquil Port Barton is another up-and-comer on Palawan’s travel radar, for laid-back kayaking and snorkelling from one flawless palm-fringed beach to another. It’s a refreshing change of pace after an adventure-filled itinerary – grab a freshly grilled squid and let time slow down. 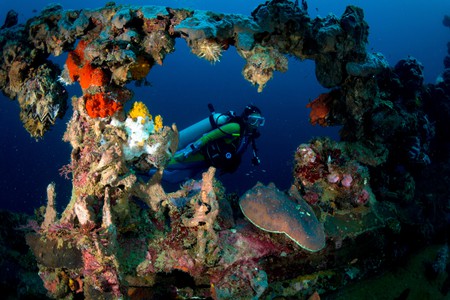 You can dive the shipwreck of the Japanese freighter Kyokuzan Maru, which sunk in 1944 off the coast of Palawan | © dpa picture alliance / Alamy Stock Photo