Ati-Atihan: A Guide to the Philippines' Biggest Festival 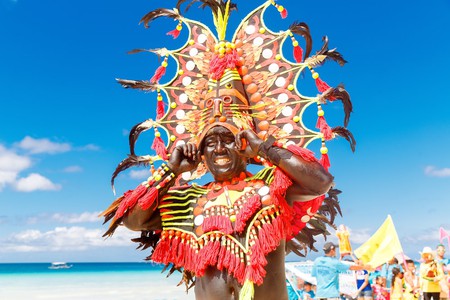 Man in colorful headdress in Ati-Atihan in Boracay | © Frolova_Elena/ Shutterstock

If you’re interested in getting the ultimate Filipino fiesta experience, then Kalibo’s Ati-Atihan festival is a must. Believed to be around 800 years old, it was celebrated by the Aetas of Panay and the newly settled Malays from Borneo, long before there was an archipelagic Philippines to speak of. Today it is recognized as the “Mother of all Philippine festivals” and is a week-long celebration that people from all over visit the city to get a taste of.

The festival’s name means “to be like the Ati’s” (also called Aetas) and today, two varying tales of the Ati-Atihan’s roots are known. While both involve the Aetas (indigenous people) of Panay accommodating Malays from Borneo seeking a new island in which to live, they differ in what takes place soon after. In one version, the first Ati-Atihan festival is said to have taken place when the new Malay settlers, in celebration of their peaceful agreement with the island’s natives, colored their faces with soot to resemble and honor the darker-skinned Aetas. In the other, it supposedly took place when the Aetas suffered a bad harvest, descended to the lowlands and sought help from their Malay neighbors, who then gave them a share of their resources. So as thanks, they sang and danced for the generous Malays. 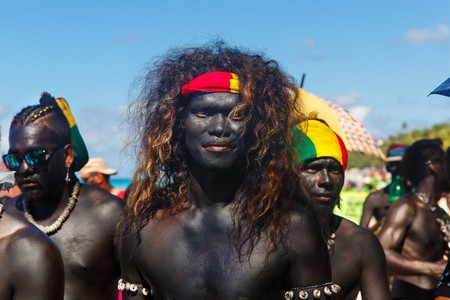 Men with darkened faces at Ati-Atihan in Boracay | © Frolova_Elena / Shutterstock

When the Spaniards colonized the Philppines, the festival was given Catholic significance and it was turned into a feast to honor the Santo Niño (a statue of the Child Jesus). This is why today, while people still darken their skin and don Aeta-inspired costumes, holy mass is also celebrated as part of the festival. 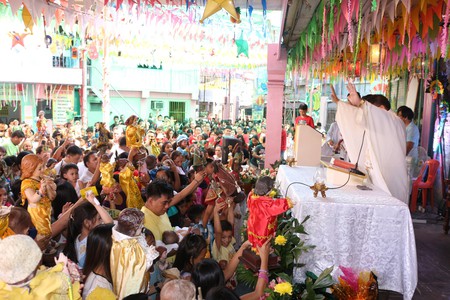 Catholic mass being celebrated in the Philippines | © G

While many Ati-Atihan celebrations take place across the Aklan province, such as in Ibajay and the famous island of Boracay, the grandest of all takes place in its capital, Kalibo. It’s a week-long celebration that culminates on the third Sunday of January, with several events leading up to grand finale held over the weekend. Bazaars and food stalls are set up across the city, but the most exciting happenings take place down the city streets. Several parades are organized throughout the week involving bright and colorful costumes, giant floats, and best of all, vigorous street dancing. 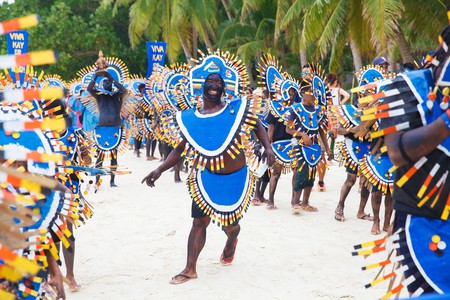 Men in costume at Ati-Atihan celebration in Boracay | © Frolova_Elena / Shutterstock

Why you should go

Unlike many other festivals where attendees stand as onlookers on the sidelines, the Ati-Atihan allows and even encourages people to be part of the celebration. With the rhythmic, and seemingly ceaseless banging of the drums, the spirited street dancing by both performers and public, and the excitement and life that just fill the air, it becomes difficult not to get pulled into the action.

And if you enjoy having a drink in hand while taking part in festivities, you’ll love Ati-Atihan even more because it lets you do just that. Expect complete strangers to be handing you cans of beer and offering you sips of rum from their bottle (or a toilet plunger – don’t worry, it’s unused).

It’s uninterrupted merrymaking, and it goes on for days. But more than just booze-infused fun, it’s an interesting chance to see the commemoration of history, culture, tradition, and the joyful Filipino people.

Hala Bira! This isn't a #childishgambino album launch party. This is the Ati-Atihan Festival. See it live and up close for as low as $1,865, all in! Locals of Kalibo gather round and celebrate in colorful costumes and darkened face paint. Performers dance in the streets as a tribute to the bond of between the early Aeta and Malay settlers. #ahmgi #choosephilippines #itsmorefuninthephilippines #kalibo #boracay #aklan #atiatihan #festival #philippines #redbone #culture #party

The next Ati-Atihan will span from the 15th to the 21st of January 2018. Different parades are scheduled to take place every weekday afternoon, while the famous whole day street dancing begins on Friday. And every night, partying and snake-dancing await attendees at the Magsaysay Park.

Don’t be afraid to delve into the tireless merrymaking, but don’t forget to keep safe too. While drinking is a part of the festivities, know your limits and consume responsibly. Remember you’ll be in public spaces, surrounded by crowds of people, adults and kids alike. It would be best to leave your valuables at the hotel as well so you avoid having to worry about them amidst the fun. Most important of all, make sure to go with loads of energy. If you want to party with the locals, you’ll have to party like them too.