A Walk Down the Philippines' Chicken Alley 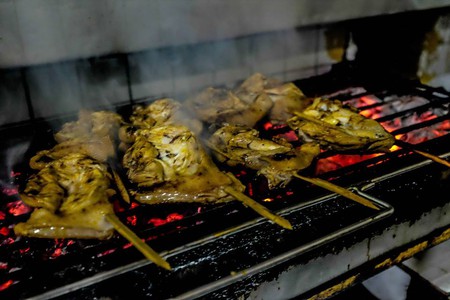 Culture Trip takes a walk down the Philippines’ ‘Chicken Alley’ to discover succulent barbequed chicken in the Visayan island of Bacolod.

Namit. The word (pronounced nah-mit, with your tongue darting between your teeth) means delicious in Visayan. People often use it when eating in Bacolod, a city resting on the northwestern coast of Negros on the Visayan Islands of the Philippines. It is hailed for its sugar mills and plantations, but is mostly known as the chicken capital of the country. Temperate and high land climates plus vast lands make the Negros region perfect for poultry farming. Whether skewered and roasted on a stick, or alive and ready to kill in a cockfighting pit, the province is obsessed with barnyard fowl.

What is chicken inasal?

More than anything, Bacolod is a city many Filipinos look forward to visiting because of its succulent chicken inasal.

Inasal is a Visayan term for roasted or char-grilled meat. It takes its roots from the Spanish word ‘asar’, which means ‘to grill’. What makes the marinade in Bacolod stand out from most recipes across the archipelago is the absence of an otherwise omnipresent Filipino condiment and cooking ingredient: soy sauce.

In the mid-1970s, across a busy market in the heart of Bacolod, lay the original ‘Chicken Alley’. The smoky Cuadra street boasted freshly grilled, charcoal-roasted chicken, which locals flocked to until late at night. In the 1980s, the city government moved the vendors to a more sanitized area. The new location was christened Manokan (Chicken) Country. Sadly, a majority of the old streets in Bacolod have given way to development. The current spot lacks the charm of its previous home and now overlooks a massive shopping center.

Manokan Country lets tourists and locals decide for themselves which marinade they prefer. Rows and rows of restaurants offer their take on inasal. Traditionally, the chicken is marinated in tuba or coconut vinegar, ginger, garlic, salt, pepper, calamansi, chopped lemongrass, and the famous Bacolod brown sugar. Other recipes call for fiery birds eye chillies and bubbly lemon soda for an added zing. The chicken is then skewered and grilled on hot charcoal. 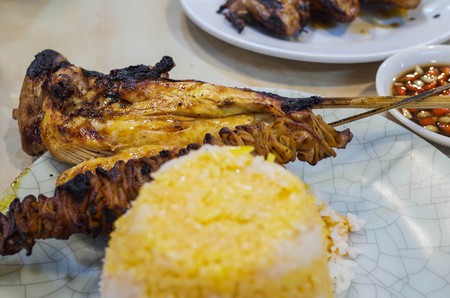 Do not confuse inasal with the run-of-the-mill barbeques you can get on most side streets in the Philippines. Inasal is free from the dark tones of soy sauce and lurid red hues of ketchup. Basting is done with banana leaves or chicken feathers. Annatto seeds are steeped in oil infused with garlic, calamansi, butter or margarine before it is brushed onto the bird while grilling. Margarine is a well-contested ingredient that might raise the eyebrows of a few Bacolod grannies.

Over 300 years of Spanish colonization (1521-1898) brought heavy influences to Filipino cuisine. Spanish sugar barons employed locals to farm the fields of Negros. New cooking techniques were handed down to them and applied to readily available ingredients in the market. It is normal to find local interpretations of Spanish staples like paella Valenciana and escabeche, which is sweet and sour fish found inside roadside food stalls in Bacolod.

If you know good inasal, you know Aida’s. They were pioneers along Chicken Alley. Initially they served a local version of batchoy, a popular Visayan high-protein soup of mystery meats and egg noodles. When the vendors across the street started grilling chicken, Aida and her family decided to develop their own iconic marinade. 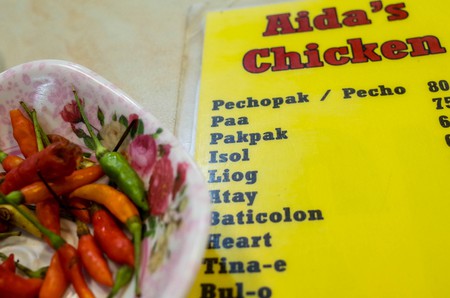 The Aida’s marinade has remained the same for the last 40 years. | © Shirin Bhandari / Culture Trip

There are only two branches of Aida’s in the Philippines: the original in Bacolod and another in the capital, Manila. The Bacolod restaurant solely concentrates on barbequed chicken and grilled innards. The Manila branch is managed by Aida’s son, Toto Tarrosa, and offers a more extensive menu of Visayan dishes. Franchising is not a priority. “It has never been about the money, but the quality of what we put on the grill,” Toto says when we meet in Manila. Their recipe has remained the same for the last 40 years.

During a recent trip to Bacolod with friends, we make our pilgrimage to the original branch of Aida’s to order an array of wings, gizzards, thighs and chicken hearts. It seemed no part of the bird went to waste. The no-frills restaurant is filled with basic wooden tables and white plastic chairs. Vibrant, handmade masks are hung across the room adjacent to a number of rickety ceiling fans. An army of condiments on each table helps tweak the dipping sauce to your personal taste. 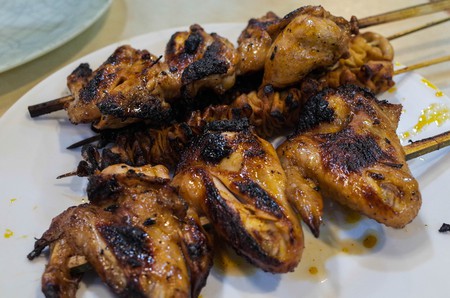 In Bacolod, no part of the bird goes to waste. Innards such as the heart, gizzard, liver and intestines are popular among Filipinos. | © Shirin Bhandari / Culture Trip

The waiter arrives carrying a tray full of random skewered chicken parts. A little green saucer holds sinamak – spiced vinegar with fresh chillies that serve as the dipping sauce. A mound of rice is topped with crunchy garlic bits. I am advised to smother it with an obscene amount of yellow chicken oil. The special condiment is made from the same basting oil combined with rendered fat from the grilled drippings.

I use a fork to remove a portion of innards onto my plate. I contemplate on which chicken part to tackle first. It is the last time I use any cutlery for the meal.

The char on the chicken is even. The skin is crisp. The lemongrass gives it a fresh and clean taste. The aggressive combination of garlic and ginger comes as a pleasant surprise as I take a bite of the juicy meat. The inasal’s marinade creates a unique flavor that can only be found in this part of the Philippines.

“Namit?” my friend asks. I nod and reach over for another stick. 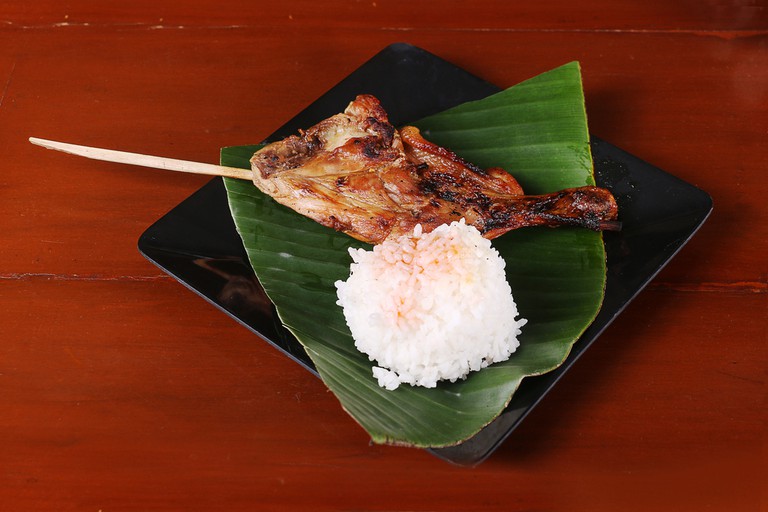 No one does chicken inasal better than Aida’s. It is, after all, the birthplace of the tasty barbeque dish. Their marinade is mixed without soy sauce, giving it a distinctly Visayan flavor.