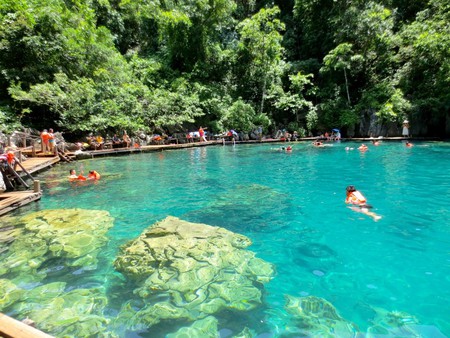 Palawan is arguably one of the top tourist destinations in the tropical paradise of the Philippines. Read on and discover the stunning sights that are responsible for making this island-province so breathtakingly irresistible to globetrotters. 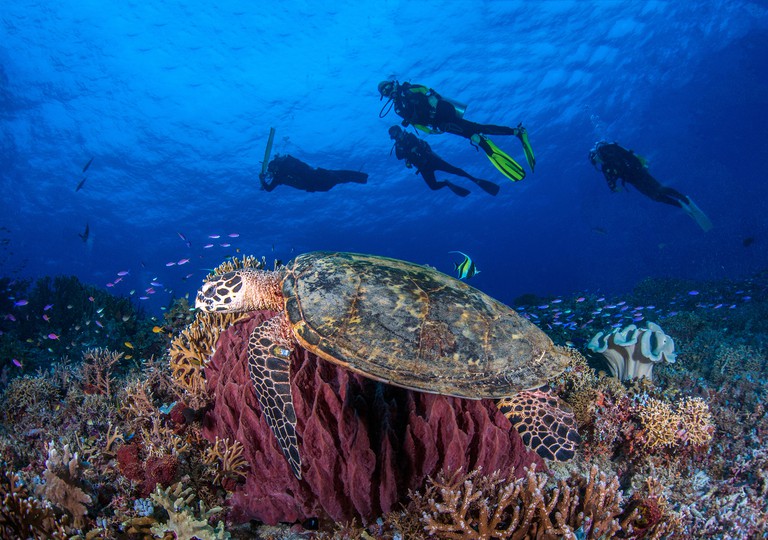 Divers swimming with a turtle, Tubbataha Reefs Natural Park, Philippines | © RooM the Agency / Alamy Stock Photo
Rightfully a UNESCO World Heritage Site, this natural attraction contains some of the most impressive marine biodiversity in the world. Strategically positioned at the heart of the Coral Triangle, Tubbataha is home to approximately half the world’s coral species, approximately 600 species of fish, as well as several species of sharks, whales, and dolphins. This makes it a dream destination for many divers. Because of its remote location and monitored preservation, interested divers can only pay the park a visit through live-aboard boats during diving season from March to June.
Open In Google Maps
Cagayancillo, Philippines
Give us feedback 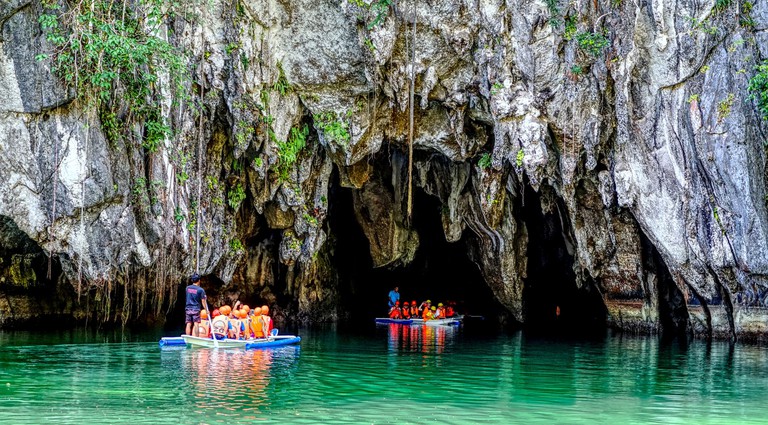 Puerto Princesa Underground River | © Paweesit / Flickr
Less than an hour’s drive from the Puerto Princesa City center lies another globally recognized natural attraction. The Puerto Princesa Subterranean River National Park, also commonly known as the Puerto Princesa Underground River, was officially recognized as one of the New 7 Wonders of Naturein 2012. This gave tourists a good reason to stay a while in the province’s capital, instead of beelining northwards to El Nido or Coron. Here, visitors enter a cave aboard paddle boats directed by their personal guide. And inside they are treated to an astonishing display of stalactites and stalagmites suspended above the calm river.
Open In Google Maps
Puerto Princesa, MIMAROPA, Philippines
+63285236023
Give us feedback 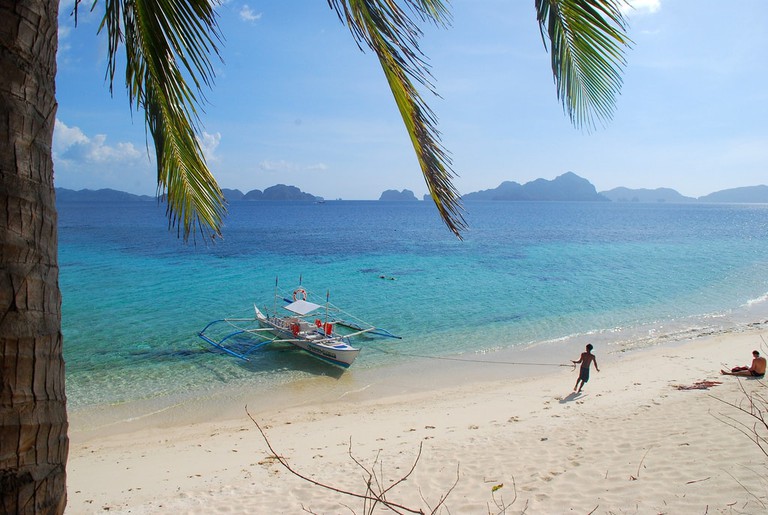 Boat docking on an island in Bacuit | © MrGaryLarson / Flickr

Northern Palawan can perhaps be considered Palawan’s crowning glory. Here lie the breathtaking beaches and waters of El Nido and Coron. The islands of Bacuit Bay in the municipality of El Nido are largely responsible for the province’s boom in tourism. The white-sand beaches are immaculate and their surrounding waters are a vibrant shade of cerulean. The best part is that there are so many of them to choose from. Popular choices, which are usually included in El Nido’s basic tours, are the islands of Entalula, Helicopter, and Shimizu. But if you prefer peacefully enjoying the sand and sea without having to share with a swarm of tourists, you can always request your boatmen to dock on less popular islands for utmost tranquility. 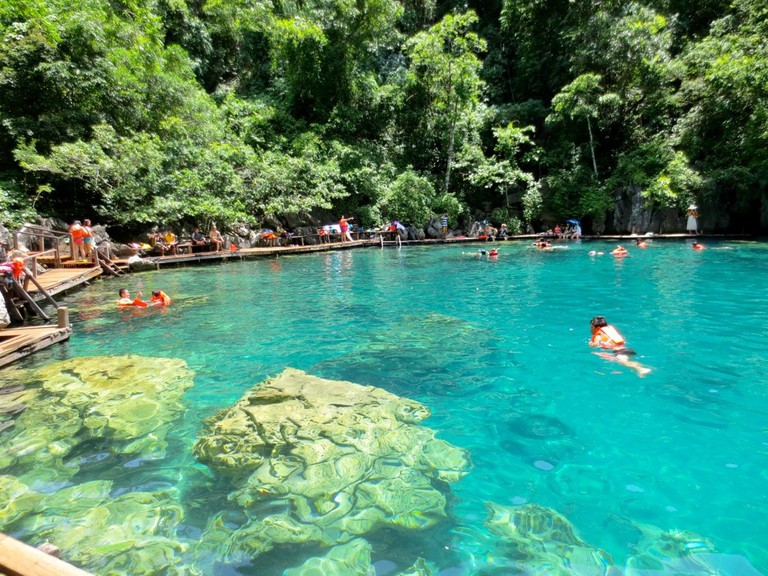 Considered by many as the cleanest lake in the Philippines, and by some as even the cleanest in Asia, Kayangan Lake is one of the most popular tourist destinations in Coron. It’s a bit of a trek (a few hundred steps) to get to the lake itself from the docking point, but the gorgeous views more than make up for the effort. The lake is warm and inviting but can get especially crowded during peak season. Try to drop by during the least popular hours of the day to avoid too much company. Sights below the lake’s surface are just as spectacular as those above, with its striking jagged rock formations that just call to be explored.

Open In Google Maps
Coron, MIMAROPA, Philippines
Give us feedback 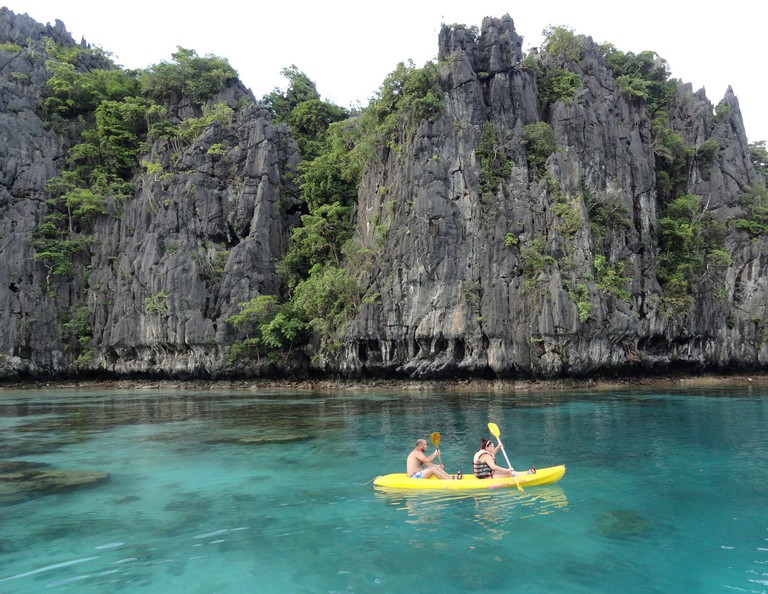 El Nido’s not-so-small Small Lagoon is a wonder to explore on kayak. Be prepared to squeeze through its narrow opening between two limestone rock formations but be even more prepared for the jaw-dropping sights that await inside. Entering the Small Lagoon will feel like entering an entirely new, almost fantasy-like world. The towering rock formations that surround it contrast the lagoon’s sparkling azure waters. Once inside, the real fun begins with exploring its many nooks and crannies. Paddle away or let the water guide your drift. This is one attraction that’s truly magical. 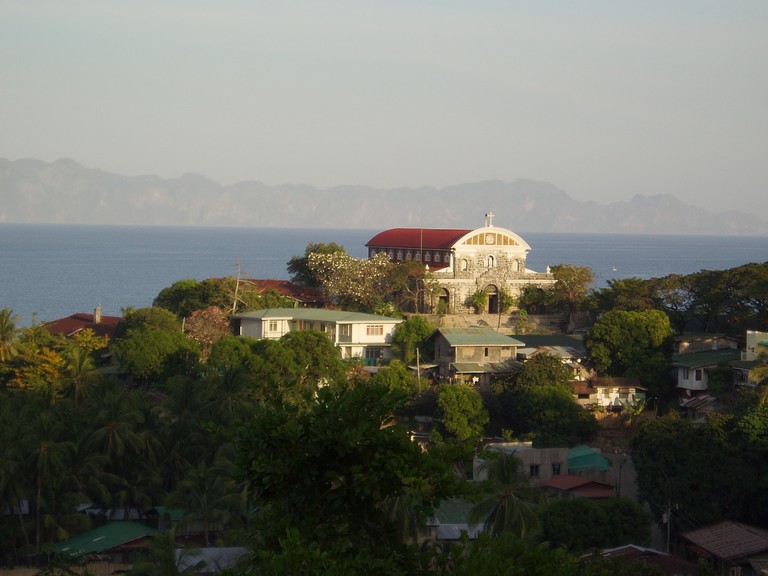 This little island neighboring the tourist hotspot of Coron is much more than meets the eye. In the early 1900’s, Culion was a designated leper colony and was divided into two areas: one for the disease-inflicted, and the other for its “healthy” residents. Many of Culion’s inflicted residents were torn away from their homes and families and shipped off to what was then a completely foreign island, never to return home again. And while the island today is leprosy-free, reminders of its painful, isolating past still remain. There’s the Culion Museum and Archives and all around town are historical structures from its days as a leper colony, accompanied by information signages that take visitors back to how life might have been like back then. Often overlooked, a trip to Culion is a moving historical experience that should not be missed.

Open In Google Maps
Culion, MIMAROPA, Philippines
Give us feedback 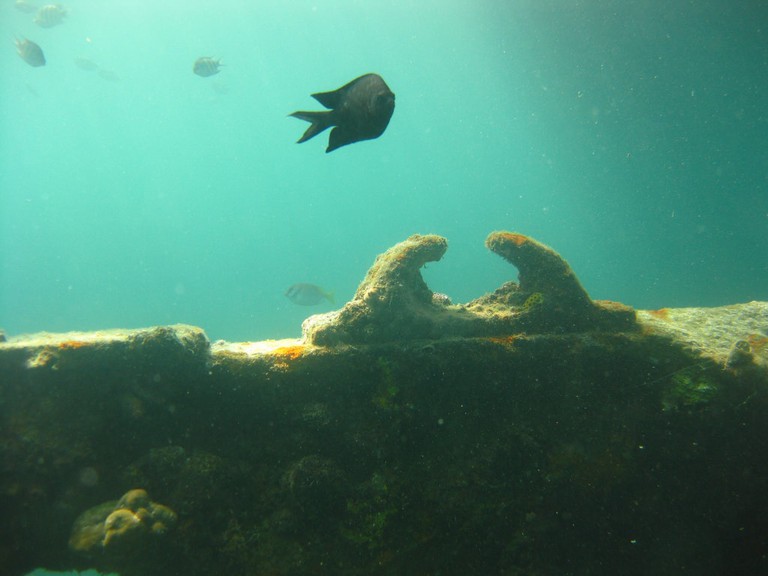 Coron is considered a wreck diver’s utopia due to the sheer number of shipwrecks right beneath the busy surface of Coron Bay. The United States’ WWII bombardment of Japanese ships in September 1944 has left nearly a dozen wrecks in the area, now bustling with marine life and still well-preserved. Because many of these vessels belonged to a supply fleet, they were carrying a good number of equipment and vehicles when they went down. These still-intact machinery make for interesting sights for wreck divers today. 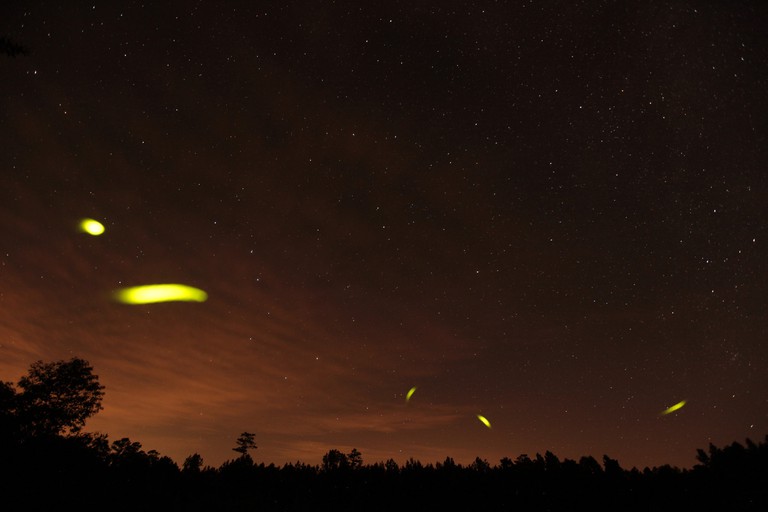 Fireflies in the night | © John Flannery / Flickr
This magical treat involves a serene paddle boat ride down the Iwahig River at night, with an enchanting display of sprinkles of fireflies twinkling within the mangroves that line the riverbank. The tour, which lasts no more than half an hour, is guided by a local who talks about these enchanting critters, the Iwahig environment, and even constellations in the night sky. Captivating glows are everywhere on this tour — from the Christmas light-like fireflies in the trees, to the stars that seem especially bright in the darkness of nature, and even down in the river where planktons flicker at the agitation of the water. It’s a fantastic tour for couples who’ll appreciate the naturally romantic setting, and children who have a special affinity for anything with a touch of whimsy.
Open In Google Maps
Puerto Pricessa City, MIMAROPA, 5300, Philippines
+639164003324
Give us feedback 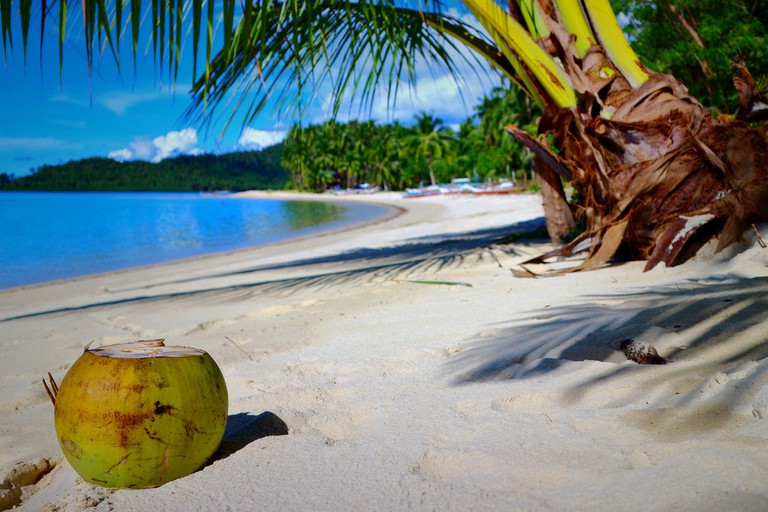 This fishing village in the municipality of San Vicente sits almost halfway between Puerto Princesa and El Nido. For some reason, its beautiful beaches and islets aren’t nearly as popular as those of El Nido or Coron. So this is one Palawan destination that still remains quite low-key. This is also perhaps its strongest allure — that its sand and shores are still peaceful, and can still be savored without the company of tourists docking one bangka after the other. Aside from pristine island-hopping stops like German Island and Exotic Island, Port Barton also has thriving reefs perfect for snorkeling and wrecks for advanced divers. 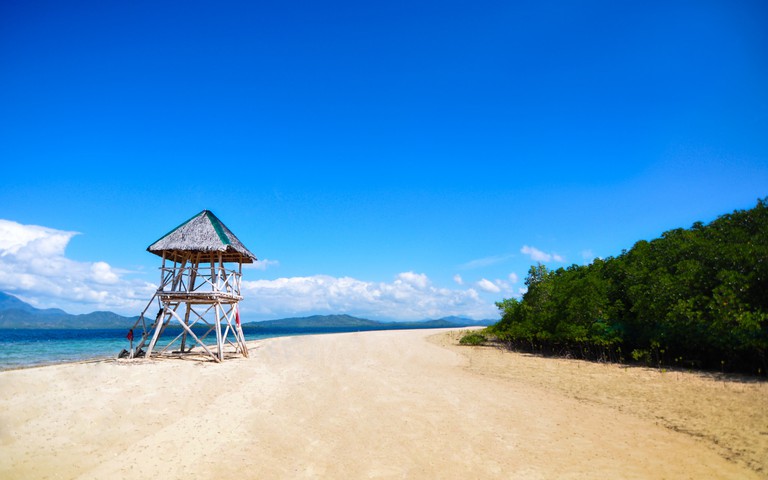 For Palawan visitors who don’t have enough time to venture up north to El Nido or Coron, the islands of Honda Bay, near the heart of the province’s capital, are a good alternative. It’s about a half-hour drive from the city proper to the Honda Bay port, where travelers can arrange their day-long island-hopping tour. Stop at Starfish Island for endless encounters with – you guessed it – starfish. Check out the picture-perfect sand bar that is Luli Island, which recedes and emerges with the tide (the name is literally derived from Filipino words which mean “sinking” and “rising”). And admire the flourishing reefs of Pandan Island and their schools of colorful fish swimming about, extremely close to shore. Set off on the tour equipped with a snorkeling set and you won’t even notice time go by as you drift along Honda Bay’s crystal clear waters, marveling at the wondrous world below. 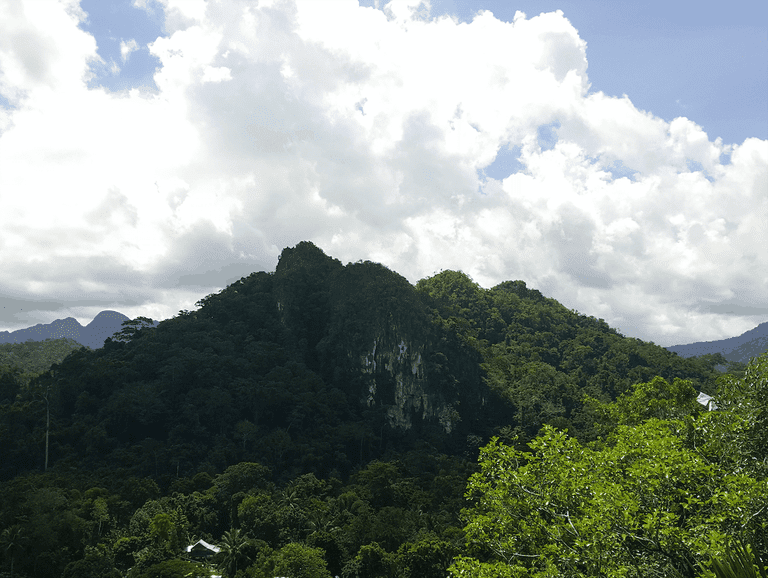 View from Ugong Rock, Puerto Princesa City, Palawan | © Katrina Escalona
Usually an extra stop en route to the Underground River, Ugong Rock is not only a pretty picture from a distance. Drive up to it and you’ll learn it also offers exciting activities any adrenaline junky will enjoy. Throw on the obligatory gloves and helmet given at the entrance and begin the spelunking adventure into the cave. It’s an upward journey that doesn’t quite end at the spectacular view awaiting upon emerging at the top, because visitors also have the option to zip line back down. You can choose to do the zip line in a seated position or let loose, go hands-free, and brave the thrilling ‘superman position’.
Open In Google Maps
Purok Pagkakaisa, Brgy, Tagabinet Puerto Princesa, MIMAROPA, 5300, Philippines
+639067081334
Give us feedback 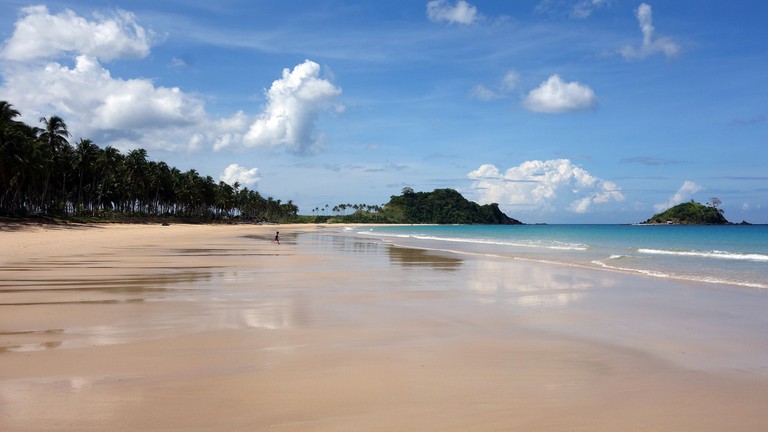 El Nido’s dreamy beaches aren’t limited to the stops of the island-hopping tours that take you around Bacuit Bay. It also has some that are easily reached by tricycle — no boat rentals necessary. The most popular ones include Nacpan, Marimegmeg, Las Cabanas, and Corong-Corong. Aside from sunbathing, walking by the shore, and gloriously lazing the day away with a cocktail in hand, perhaps the best thing to do at these beaches is to wait for sunset and watch as everything takes on the soft, warm glow of golden hour. 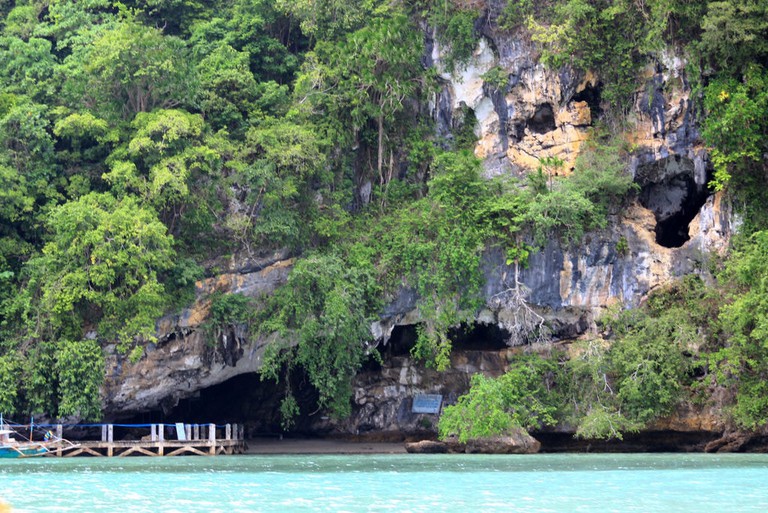 Not nearly as popular as Puerto’s Underground River, the Tabon Caves in the municipality of Quezon has been a long overlooked Palawan attraction — and a significantly historic one at that. While there are over 200 caves in the area, only seven are open to the public. The caves proved to be an archaeological gold mine when fossils and artefacts dating up to 50,000 years ago were discovered. Perhaps the most notable of these finds were the skeletal remains of the Tabon Man, which dates back over 16,000 years. A tibia bone, the oldest that has been found so far, is considered one of the oldest evidence of Homo Sapiens from Southeast Asia. To visit the cave complex, a permit is first needed which requires a prior visit to the local National Museum branch in Quezon. A boat rental also needs to be arranged as it is the only way to reach Lipuun Point. 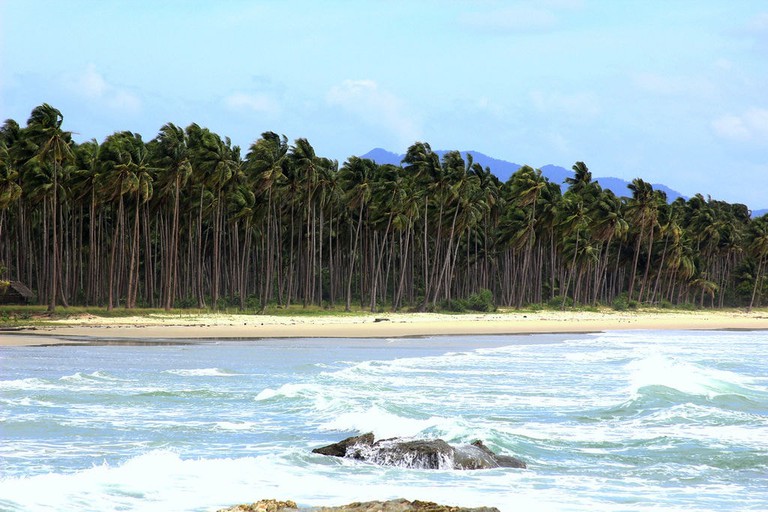 Dubbed the longest white-sand beach in the country, Long Beach in San Vicente stretches an astounding 14 kilometers long. And unlike Palawan’s tourist hotspots, this beach has barely any traces of commercialization (yet). Pay this beach a visit and you’ll be treating yourself to the luxury of feeling like you have your very own tropical haven that goes on forever. No other tourist will likely be in sight — just pure, raw sand and sea goodness.

Open In Google Maps
MIMAROPA, Philippines
Give us feedback 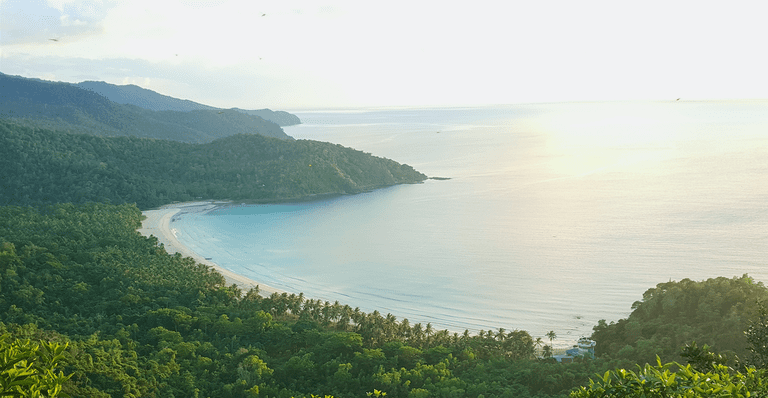 More than a tourist attraction, Nagtabon Beach, about a 45-minute drive from the Puerto Princesa city proper, is a local favorite. Because of its accessibility from the city, here you’ll find locals who’ve just gone for an afternoon drive, university students who have just gotten out of class and wanted to hit the beach, or barkadas (groups of friends) enjoying cold brews by the sea. It’s a great beach to lounge so pack a picnic and a cooler. Another local secret is the Nagtabon Viewdeck nearby, which offers the most gorgeous view of the Nagtabon cove and sunset. It’s a great way to spend an afternoon like a Puerto Princesa local.