11 Reasons Why You'll Fall in Love With Filipino People 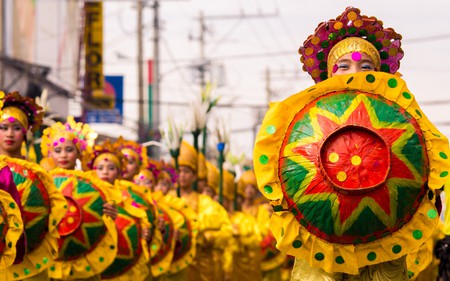 The Philippines, with its pristine beaches and stunning landscapes, is a country that isn’t difficult to love. And just as a trip here will almost certainly make you fall for everything you see on its islands, it will also make you fall for everyone you meet on them. Here are 11 reasons you’ll simply love the Filipino people.

They’ll welcome you with open arms

An especially well-known characteristic of the Philippines and its people is hospitality. It’s one of those identifying traits associated so closely to being a Filipino. Warmly accepting guests comes to Filipinos so naturally it almost seems hardwired into their systems. Because as much as Filipinos love their culture and country, they will gladly share it with any visitor who extends that same love.

Many of them go the extra mile in making visitors feel almost like VIP’s. So when you find yourself in a Filipino home, don’t be surprised if you’re forbidden to help out with anything — guests are usually not made to lift a finger. If offering to do the dishes, for example, will make you more comfortable, go right ahead, but expect a likely response along the lines of: ‘Hindi, bisita ka (No, you’re a visitor)’. 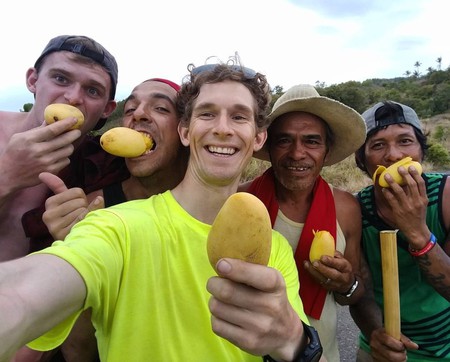 If you end up in the presence of Filipinos for an extended period of time, you can expect the visitor hospitality to turn into genuine familial love. Filipinos are very family-oriented and there is usually no longer a distinction among extended family, close family friends, or even your parents’ childhood best friends. So yes, once an honorary member of a Filipino family, you can also expect to be invited to all of their fun and food-filled gatherings. 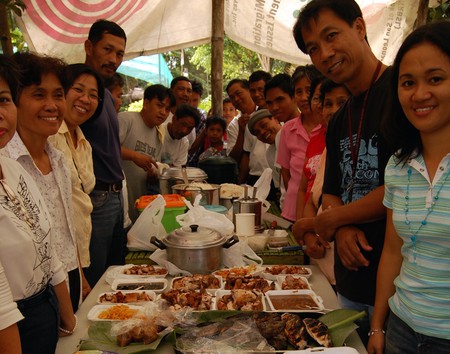 They’ll feed you as well as your grandma does

‘O, kain pa (Come on, eat some more),’ is an ubiquitous phrase at any Filipino meal or get-together. Filipinos have an affinity for food that perhaps surpasses even their affinity for karaoke — and that’s saying a lot. To the surprise of many foreigners, the generally slim and petite Filipino can actually put away quite the amount of food. Filipinos usually have three square meals a day, several meriendas (‘light’ snacks) in between, and the infamous ‘extra rice’ to boot. They simply enjoy food and they will get you to do the same. A laugh and an, ‘I’m already full, thanks,’ will generally do the trick for the tireless second-serving persuasion. But you might have to repeat yourself a few times to the several titas (aunts) that offer.

Filipinos seem to be inherently optimistic — a trait that, if you’re exposed to long enough, will eventually rub off on you, too. It isn’t uncommon to see news reports about natural disasters such as storms and floods striking the country during its wet season. Nor is it rare to catch Filipinos in the background of footages laughing, playing in the rain, and holding up peace signs at the camera – instead of wallowing in misery. This ability to see the good amid the bad is admirably natural to the cheerful Filipinos. 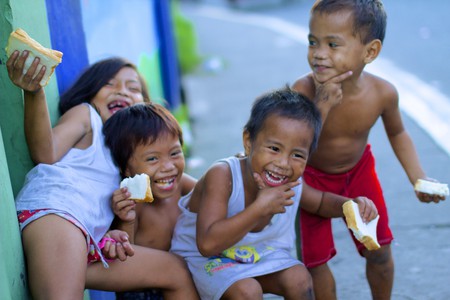 They’re among the friendliest people you’ll come across

Once you get along with a Filipino, it won’t be long before they introduce you to their other friends and, eventually, maybe even include you in their barkada (close circle of friends). Despite some of them initially coming off as shy, Filipinos are usually very keen on meeting new people. The key is to keep a happy, easy-going disposition and a good sense of humor, and they’ll love having you around. 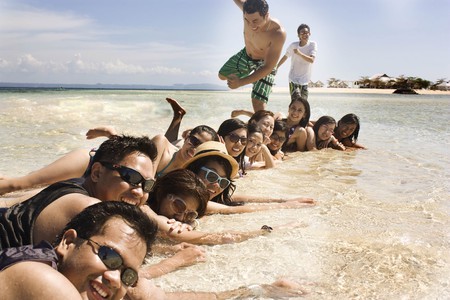 They have a fantastic sense of humour

Filipino humour is not something an outsider will easily understand. But it dominates so much of their day-to-day lives, it is impossible to ignore. Filipinos, being the positive, ever-happy people they are, enjoy a sense of humour that takes delight in almost everything — from sarcasm, to situational comedy, and to the simple mockery of how a word is pronounced. Understanding how some of these things are funny might be puzzling to some foreigners at first, but surround yourself with this contagious spirit enough and you’ll quickly catch the Pinoy laughing bug. 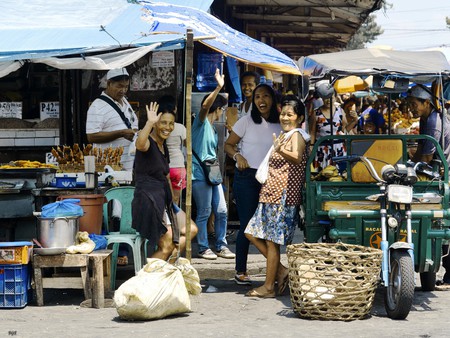 They’re a lot of fun

Aside from their laughter-is-the-best-medicine outlook on life, Filipinos are simply a lot of fun to be around. Meet a Filipino for the first time and they will seem like the shyest wallflower. But throw them into their group of friends and family and they transform into a completely different person. Though it may take some time to get Filipinos to be comfortable with you, once they are, they shift into their talkative, silly, karaoke-loving selves. When they bring out the pansit, lumpia, and Magic Sing, you know a Filipino party is about to go down — and you’re going to enjoy every minute of it.

They are empathetic and helpful

Filipinos are taught at an early age the value of pagmamalasakit sa kapwa or knowing how to show concern and empathise with other people. So when they sense that somebody is carrying any sort of burden, especially if that somebody is a friend or considered family, they will try to help out as much as they can. Among communities, an important Filipino value is the concept of bayanihan, wherein when any member of the community is in need, the others pitch in what they can, no questions asked. Essentially, it is the community coming together to accomplish a task. Common in the rural areas of the country, this is exemplified in the practice of lipat bahay (literally, ‘moving house’) when men from the community help lift a neighbour’s entire nipa hut and carry it over to its new location. 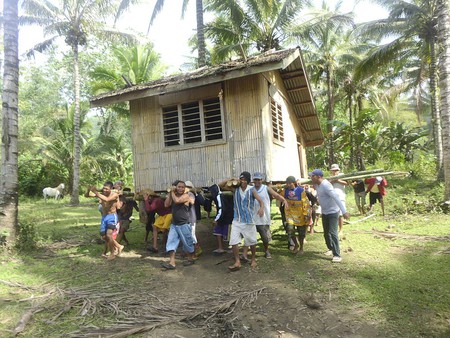 It doesn’t matter if you’ve asked your Filipino friends to teach you Tagalog or not — you’ll unintentionally be picking up words throughout your friendship. Both Filipino and English are official languages in the multilingual archipelago and often both languages are merged and used simultaneously to fill minor gaps in either one. So because the phrases ‘a while ago’ and ‘earlier today’ are simply too long to say, your Filipino friends might simply ask you to remember the word ‘kanina’. Or might they find themselves constantly slipping in Tagalog sentence particles during your conversations, they’ll likely start explaining the difference between words like pa, na, and ba (so they can begin using them when talking to you, too, of course).

They’re the most interesting mix of different cultures

Because of the country’s history of colonialism and encounters with several different cultures — Chinese, Malay, Spanish, American, and even Japanese — what has resulted is the most curious melting pot of varying traits and practices. Travellers familiar with any of these cultures will be surprised and amused at the parallels Filipinos carry in their ways of life, from cuisine and language, to beliefs and values. 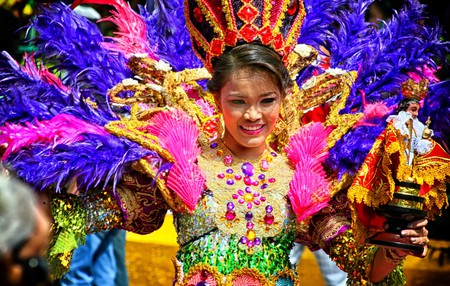 If you spend enough time around Filipinos, you’ll quickly realise their fondness for taking photos. Because this love for photos is coupled with a fascination for social media, many Filipinos have impressively-curated Instagram feeds. And when you’re friends with them, yours will be no different. Since Filipinos like having good photos taken of themselves, they’re the perfect people to ask to take those of you, too. They will know to take a lot (to give you a good selection), to take from various angles and from which ones. So for some envy-inducing travel photos on your trip to the Philippines, don’t be shy to ask help from Pinoy friends. They’ve got you – and all your best angles – covered. 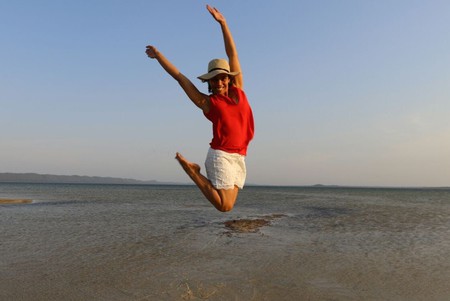