Why This Qandeel Baloch Biography Is Going Viral 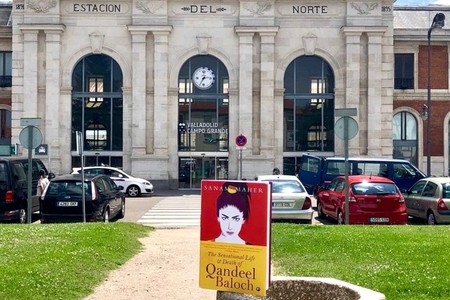 A debut book penned by Sanam Maher about Pakistan’s most controversial social media star, Qandeel Baloch, is going viral. Images of Maher’s book, The Sensational Life & Death of Qandeel Baloch, have been popping up as social media posts and part of online stories from readers in destinations all over the world.

The Sensational Life & Death of Qandeel Baloch is a nonfiction book written by Pakistani journalist Sanam Maher. Shortly after its launch in May 2018, the biography began traversing across the world as people picked up the book to take on their travels. One reader sent the author a photo on Twitter taken from his balcony that featured his copy against the backdrop of Hunza’s snowcapped mountains in the north of Pakistan.

Maher shared the image on Instagram, and before long, she was flooded with pictures of others doing the same. So far, shots of Baloch’s biography have been shared from India, UAE, Qatar, Thailand, Myanmar, Turkey, England, Switzerland, Spain, the U.S., Canada, and Australia. In life, Baloch notoriously caught the attention of a nation, but her shocking death was felt across Pakistan and reported in many other parts of the world.

Who is Qandeel Baloch?

Baloch was considered Pakistan’s Kim Kardashian. Speaking to Culture Trip, Maher explains that Baloch “was just this girl that everyone found hilarious. They either hated her or liked to make fun of her.”

Baloch shot to fame after the videos she made went viral. In one video, she spoke out against “a presidential ‘warning’ not to celebrate Valentine’s Day.” Wearing a red dress, she lamented, in broken English, that “they can stop to people go out…but they can’t stop to people love.” In another, she promised to do a striptease if cricketer and team captain Shahid Afridi could secure Pakistan a win against India.

Following this, in a comedic news show called Ajeeb Sa, Baloch was invited to discuss her promise to the nation from a studio in Karachi as Mufti Abdul Qavi was patched in through a live feed. Qavi was known for running a religious school in Punjab. The presenter asked Qavi what he thought of Baloch’s announcement to do a striptease. Qavi dodged any provocative questions, but in a throwaway remark, he said that he was interested in meeting Baloch the next time he was in Karachi.

In June 2016, Baloch shared a series of social media posts that sparked debate all over the country. Baloch posted selfies of herself with Qavi during Ramadan, including a video in which Qavi said he was glad to have met the model and would be guiding her on religious matters.

A media frenzy surrounding Baloch like none other before ensued. Television stations relished in their reports of the playful selfies depicting the meeting of a well-known mullah and a viral star. About a month after this, Baloch was discovered dead on July 16, 2016, in the house where her parents live in Multan, having been murdered by her brother the night before.

The Sensational Life & Death of Qandeel Baloch begins with the star’s tragic death. Baloch’s younger brother Waseem strangled the social media star while she was sleeping during the evening of July 15, 2016. Calling it an honor killing and punishment for the shame Baloch had brought on their family, Waseem confessed to the murder of his sister.

While she had hoped to connect with Baloch to pursue a story about her virality, Maher didn’t get the chance to do so. When the news of Baloch’s death broke, the author was among the thousands of people who felt her murder deeply.

Maher explains that “people were feeling this murder a lot more than if it was just another honor killing. On the one hand, some men and women were having a strong reaction and were devasted by what had happened to this woman, and on the other, people felt Baloch deserved this. This reaction interested me. I felt this was a moment in Pakistan where one woman’s story, her rise, how she created this persona for herself, the kind of audience she was able to draw in, the murder itself and what it said about Pakistan needed further exploration.”

The themes in the book stem from elements of Baloch’s life. Her journey opens up conversations about what is happening in different parts of Pakistan, taking into account stories from all over the country and drawing parallels between them. Maher says that “Baloch was in a unique position as a woman that went viral in Pakistan. You have this space where you can be whoever you want, do whatever you want online but are very much rooted in a space offline that still has cultural and social norms, and what does that disconnect do to a person? What are the repercussions that can sometimes happen?”

As Maher’s The Sensational Life & Death of Qandeel Baloch travels across the world, Baloch’s power and influence continue to stretch from beyond the grave. In the aftermath of her death, the social media star has been reimagined as a symbol for Pakistani women.

The cover of Maher’s book is a design by a Lahore-based artist named Rahema Zaheer Alam. Alam shared it on her social media after news of Baloch’s death broke, and the post went viral. Many women went on to wear the graphic as a mask at a women’s march. 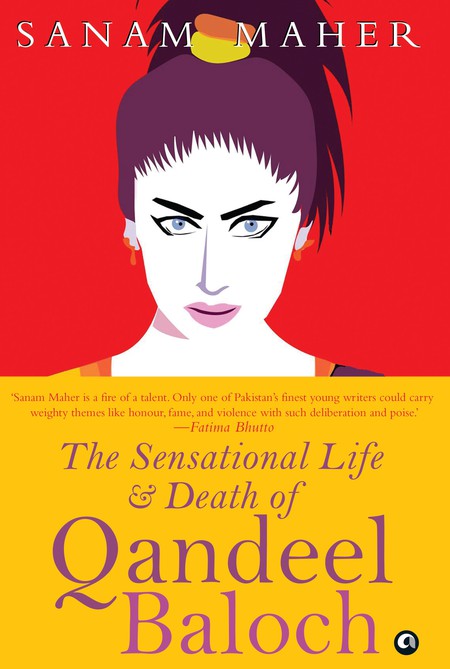 The author says it’s terrific to see Baloch out in the world in this way. In an earlier interview, Maher pointed out how easy it was to put Baloch on a pedestal now, but it is important to remember the real woman at the heart of this story. Sadly, Baloch wasn’t as appreciated when she was alive. She may have been a social media star, but she stood for something. Tragically, it was only after her death that people began to realize this.

Maher says that “seeing readers take her out like this is a way to tap into that sentiment. I love the idea that her story hasn’t died out. Baloch’s presence and what she brought to our lives just by being herself still means something to a lot of people.” In the author’s eyes, seeing a person behave in this way and assert their independence, to have a woman embrace her beauty and desire to dress in a certain way and take a selfie fully knowing that she has haters but not caring is a powerful thing. Maher adds: “So, it is wonderful to see this book taking on its own journey and continuing the story.”