This Pakistani Bootleg Cover for 'Silence' Will Make You Laugh... and Cringe 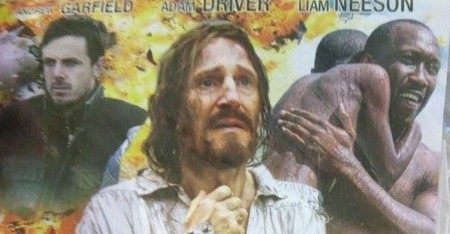 One eagle-eyed Twitter user has spotted an unusual cover for Martin Scorsese’s latest film, and it doesn’t take a genius to figure out that something is amiss. Who knew that the director of GoodFellas and The Wolf of Wall Street was also responsible for an Avengers style team-up movie?

Pakistan's DVD cover art for SILENCE is the Cinematic Universe we deserve. pic.twitter.com/hj2FrfelZm

Even the tagline is botched, as apparently ‘Sometimes Silence Deadliest Soun [sic]’ is the key selling point of the movie.

Silence was Scorsese’s meditative take on the plight of Christian missionaries in Japan during the early part of the last century. We spoke to the director’s regular collaborator and editor of choice Thelma Schoonmaker about the movie, and it’s pretty obvious that it’s not the cheery film implied by the cover.

In fact, all three films on the cover are far from the sort of movies that lead to a shared cinematic universe.

“It’s Not The Wolf Of Wall Street!” Thelma Schoonmaker On Scorsese’s Silence

In Manchester by the Sea, Casey Affleck plays a janitor returning to his hometown after a family tragedy in a desperate attempt to reconnect with his grieving nephew. The role saw the actor win an Oscar, as well as a writing award for Kenneth Lonergan.

The movie that eventually picked up the Best Film Award, Moonlight, also features on the cover in question. We spoke to the stars of the film and asked them about the reaction to the film long before it triumphed over La La Land in controversial fashion.

Our advice is simple. If you see a bootleg copy of a DVD, just avoid it altogether.