The 10 Most Dangerous Cities In The World

Unfortunately, no matter where you live there is always going to be danger around. These are some of the more dangerous places on earth. Like anywhere in the world, you have to be aware of your surroundings. 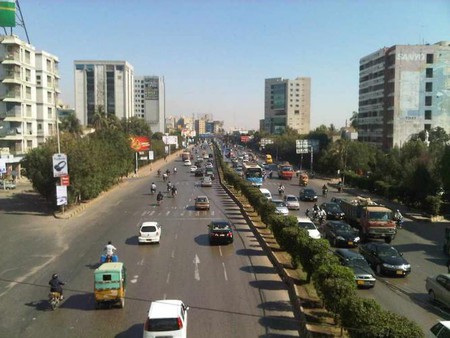 Karachi | © کراچی برنامج No Real Name Given AKA دانلود سكس/Flickr

The largest city in Pakistan, Karachi has seen its fair share of crime, from terrorist attacks to sectarian violence to drug violence. Foreign Policy, a US magazine, deemed Karachi as ‘the most dangerous megacity’ in a 2013 study. With a population of more than 20 million people, Karachi has areas that are controlled by terrorist organizations, mainly the Taliban. The military and police force, which have lost many of their own, have really started to crack down on crime there. According to an article posted on Reuters.com in August 2015, ‘murders have decreased by 50 percent over the 12 months through July…’

There is no doubt that Baltimore, Maryland, has a lot of great things to offer. However, there are areas of the city that are ridden with crime. Oftentimes, poverty and crime go hand in hand, and the poverty rate in Baltimore as of the end of 2014 was high at 23.3 percent. According to statistics, there were also 1,401 violent crimes per 100,000 during the same year. In a July 2015 article posted on USA Today‘s website, Baltimore had already seen more murders in that year than it had in the previous year by the same time. There has also been much unrest in the city recently due to police brutality. The police commissioner was recently fired.

Cape Town, South Africa, has many wonderful areas to explore; however, there are other areas of the city that people definitely do not want to enter, including those areas outside the popular tourist spots. These districts have high poverty rates and unemployment is through the roof. There is still social unrest prevalent throughout. For example, Cape Flats, a township southeast of Cape Town, has one of the ‘highest murder rates’ in the area. Other townships, including Manenberg, see a lot of gang activity, which includes drug trafficking.

It should come as no surprise that the city of Kabul, located in eastern Afghanistan, is classified as one of the most dangerous cities, as it is still an active war zone. With terrorist organizations such as the Taliban and ISIS in the area, Kabul can, unfortunately, see violence erupt at any moment, making it one of the most dangerous places on earth. Many countries even have the city and nation as whole on travel warning lists due to the high threat of terrorism.

The capital city of Yemen, Sana’a has seen a lot of political turmoil that has escalated very quickly. Indeed, Yemen is experiencing a civil war. Houthi rebels – who are Shi’ite – took over the government in February. There have since been many airstrikes led by Saudi Arabia — who supports the ousted President Abd-Rabbu Mansour Hadi — causing destruction of buildings and, unfortunately, the deaths of many innocent people, including children. Add al-Qaeda into the mix, and not only is Sana’a a very dangerous place to be at the moment, but Yemen is a dangerous country as a whole.

The capital city of Somalia, Mogadishu has seen decades of war and only recently has started to heal. Unfortunately, there is still unrest thanks to the al-Qaeda-backed militant Islamist group, al-Shabaab, which continues to terrorize the area. Indeed, this group was responsible for the bombing of a hotel in July — at least 13 people lost their lives in that attack, with many more injured — plus a car bombing at a busy intersection in August 2015.

Caracas, Venezuela, is a contemporary city with great food and drinks, intriguing art, and exciting adventures. Unfortunately, it has also been named as one of the most dangerous places in the world due to the rampant crime that takes place most often in the poor areas (also known as ‘barrios’) where gangs rule. In addition to drug trafficking, parts of the city are rife with murder (the city has the second highest murder rate in the world — 134 per 100,000), rape, robberies, and kidnappings.

It’s not just Karachi; Pakistan as a whole has seen numerous terrorist attacks by the Taliban and those affiliated with them. Peshawar is no different. Located in northern Pakistan, Peshawar is a vibrant city steeped in history, as it is one of the oldest cities in South Asia. Unfortunately, the city has also had to deal with many attacks, one of which killed many children. In December 2014, seven gunmen entered the Army Public School and killed more than 140 people, most of which children between the ages of eight and 18.

Nairobi’s danger is isolated, for the most part, to certain areas. There are travel warnings in place describing some of the crimes that may take place in each area, including carjackings, home invasions, and even kidnappings. Nairobi has also had to deal with terrorist attacks, including an attack at the Westgate Shopping Mall. In September 2013, 67 people lost their lives, and many others were injured, when the al-Shabaab terrorist group open fired in the mall, which just recently re-opened.

What comes to mind when thinking about Acapulco, Mexico: beautiful resort town with lovely beaches and — violent crime? Unfortunately, the area has been the scene of many violent crimes, as rival drug cartels battle over the territory. Even though the murder rate has fallen a bit over the past couple of years — compare 2012’s rate of 142 killings per 100,000 people to 2014’s 104 — the city still has one of the highest rates in the world. However, the crime usually does not take place in the tourist areas.