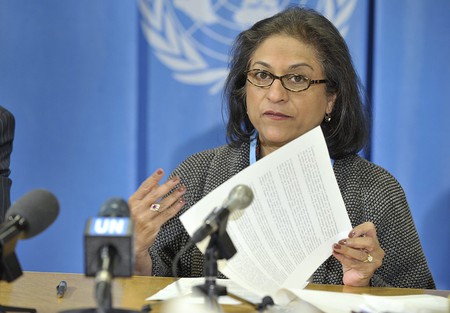 The world became a little bleaker this Sunday, when it was announced that internationally revered activist Asma Jahangir had died unexpectedly. 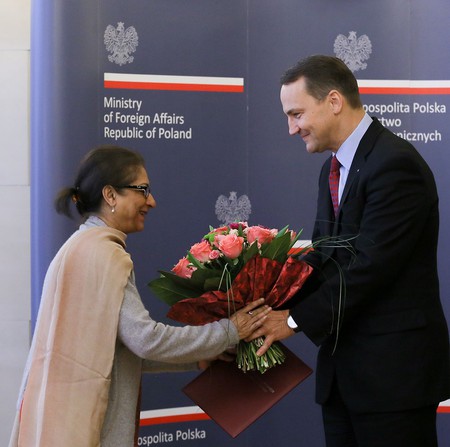 Jahangir was a beacon of hope for many. Her tireless dedication and pursuit of equality led to Prime Minister Shahid Khaqan Abbasi praising her for her “immense contributions towards upholding rule of law, democracy and safeguarding human rights.” She appeared in Time’ s 100 most influential women list, and was awarded with three honorary doctorates Other awards and accolades she received throughout her lifetime include a 2005 Nobel prize nomination, a UNESCO/Bilbao Prize for the promotion of culture and human rights, France’s highest civilian honor and the Swedish Nobel prize.

Her tussle against dictators and her exposure to activism and politics began from an early age, as growing up, she frequently saw her father, Malik Gulam Jilani, being jailed for opposing military rule. When the military despot Ziaul Haq imposed martial and sharia law in the country in the ’80s, Jahangir, then 28 years old, strongly showed her disapproval, especially against the strict Hudood and blasphemy laws. Soon after, she established the country’s first all-woman law firm. Later that same year, she also helped create the WAF (Women Action Forum), which to this day fights against discriminatory rape evidence laws and campaigns to change Pakistan’s highly patriarchal norms.

She also championed for the rights of those without a voice in society, such as women and girls that had suffered sexual abuse as well as minorities who faced unfair persecution, especially those charged with blasphemy. These particular cases were dangerous, as individuals could face the death penalty or were at risk of being assassinated. 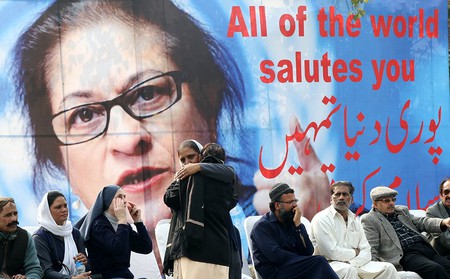 Mandatory Credit: Photo by RAHAT DAR/EPA-EFE/REX/Shutterstock (9375398d) People attend the funeral of Asma Jahangir, former President of the Supreme Court Bar Association of Pakistan and prominent Human Rights lawyer, in Lahore, Pakistan, 13 February 2018. According to media reports, pro-democracy activist Asma Jahangir passed away due to cardiac arrests at the age of 66, on 11 February 2018, she was also reported to have been suffering from cancer and remained under treatment for years. Jahangir received France's highest civilian award in 2014 and Sweden's alternative to the Nobel Prize for her decades of rights work. Asma Jahangir Funeral, Lahore, Pakistan - 13 Feb 2018

In addition to this, Jahangir contributed immensely to the formation of Human Rights Commission of Pakistan and served as a chair for the organization along with being a trustee of the International Crisis Group. Despite receiving numerous death threats, she remained a fierce opponent of the Pakistani military and was heavily critical of their interference in governance.

Jahangir also served as president of the Supreme Court’s Bar Association and was a U.N. rapporteur on human rights. She was often targeted by the media for being un-nationalistic due to highlighting the country’s problems and propagating a negative image while doing nothing to stop injustices against Muslims in the region. To this she said “It sounds very hollow if I keep talking about the rights of Kashimiris but do not talk about the rights of a woman in Lahore who is butchered to death.”

Leaders from all over the world across many industries expressed their sorrow at her loss.

Heartbroken that we lost Asma Jahangir – a saviour of democracy and human rights.

I met her a week ago in Oxford. I cannot believe she is no more among us. The best tribute to her is to continue her fight for human rights and democracy. pic.twitter.com/Tf7VOYfvq5

I am deeply saddened to hear about the death of Asma Jahangir.

A brilliant human rights activist who dedicated her life to standing up for the rights of women and religious minorities in Pakistan and throughout the world.

Asma Jahangir , undoubtedly the bravest and the most resilient fighter for human rights who had the courage to face the wrath of the dictators and the fury of the fundamentalist Mulla has passed away . It is the loss of the whole Sub continent .

After suffering a cardiac arrest, Ms Jahangir was rushed to hospital, but died the following day. Her sudden death sent shock waves throughout the country, especially among her supporters and those who looked to her for leadership, legal advice and human rights protection. Even her critics, which were numerous, could not help but show their respect for her courageousness and will.

As Pakistanis come to terms with the incredible loss of a woman who was the “conscience of the whole nation”, Ms Jahangir’s protegees have enormous shoes to fill if they are to make her proud. 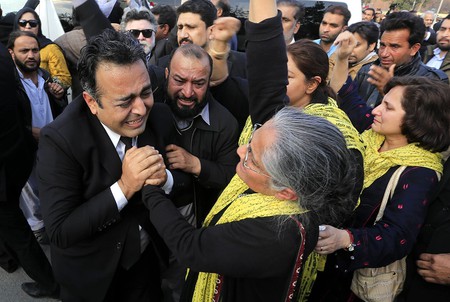 Mandatory Credit: Photo by RAHAT DAR/EPA-EFE/REX/Shutterstock (9375398e) Pakistani Lawyers reacts during the funeral of their colleague Asma Jahangir, former President of the Supreme Court Bar Association of Pakistan and prominent Human Rights lawyer, in Lahore, Pakistan, 13 February 2018. According to media reports, pro-democracy activist Asma Jahangir passed away due to cardiac arrests at the age of 66, on 11 February 2018, she was also reported to have been suffering from cancer and remained under treatment for years. Jahangir received France's highest civilian award in 2014 and Sweden's alternative to the Nobel Prize for her decades of rights work. Asma Jahangir Funeral, Lahore, Pakistan - 13 Feb 2018
Give us feedback