The 10 Most Beautiful Landmarks You Should See In Pakistan

For centuries before obtaining independence, Pakistan was governed by different rulers, from the nature-loving Mughal Emperors to the British colonialists. Such a complex and fascinating history has left behind numerous military and religious landmarks scattered across the country, where stunning mosques, forts, mausoleums and national monuments stand to this day. Discover some of Pakistan’s best attractions and sights with our guide to the country’s most striking examples of historic architecture. 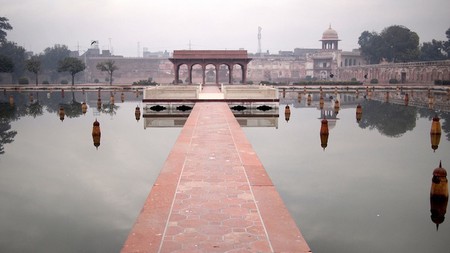 Completed in 1641, the Shalimar Gardens were the possession of a noble, Pakistani family, a governance not difficult to guess at all, considering the magnificence of this beautiful site. The gardens are laid out over three descending, successive terraces carrying the poetic names of Bestower of Pleasure, Bestower of Goodness and Bestower of Life, each rising four to five meters above the other. Despite the ravishing flowers and lush fruit trees, the flora isn’t the best attraction of these gardens, as the misleading name might suggest. In fact, most striking are the large pools placed in the middle of the terraces, which receive water from hundreds of fountains (410 in total across the three terraces). The quaint pavilions, porticoed audience halls and marble basins found along the edges of the pools complete a peaceful, dream-like and refreshing corner in the city of Lahore.

When Turkish architect Vedat Dalokay‘s design was chosen for the Faisal Mosque, many raised their eyebrows. The project differed from traditional mosque architecture, as it featured contemporary, sleek lines and, most notably, lacked a dome. Construction work began in 1976 and was finally completed ten years later. By then, most criticism had crumbled in front of the imposing, captivating building that now dominates Islamabad, Pakistan’s capital city, from its elevated position at the foot of the Margalla Hills. The mosque is named after Faisal bin Abdul-Aziz, the Saudi king who suggested the idea of a national Pakistani mosque, and largely financed its construction. The 5,000-square-meter prayer hall is an eight-sided, concrete structure, inspired by the traditional tents of Bedouins, with a capacity for 100,000 worshippers. It’s surrounded by four 88-metre-high minarets in perfect one-to-one ratio with the base. They were designed as the sides of an imaginary cube, in honor of the sacred, cubic Kaaba found at the centre of Mecca’s most important mosque.

The Pakistan Monument was inaugurated in Islamabad on 23 March 2007 as a national monument embodying the country’s history, and is in effect rich with significant cultural references. For its design, architect Arif Masood drew inspiration from the figure of a blossoming flower to represent the four provinces and three territories into which Pakistan is subdivided. The structure consists of four bigger ‘petals’ (the provinces), alternated with three smaller ones (the territories), built in granite and decorated with murals on the inner sides. Seen from above, the monument meaningfully recalls the five-pointed star on Pakistan’s national flag. Below the petals, a metallic crescent is found, which is inscribed with verses by Pakistan’s founder Muhammad Ali Jinnah and Indian poet Muhammad Iqbal.

Widely revered as the Great Leader or Father of the Nation throughout Pakistan, Muhammad Ali Jinnah was a pivotal figure in leading the country to independence from the British Empire. A beautiful mausoleum in Karachi, Pakistan’s largest city and Jinnah’s hometown, celebrates his memory and is home to his tomb, as well as those of his sister and Pakistan’s first prime minister. The mausoleum’s bold design impresses with its striking yet iconic simplicity: a nearly cubic base, with an extension of 75 square meters, topped by a large dome, both clad with splendid white marble. The sanctum can be entered on any of the four entrances, one on every wall, and each situated under an eye-catching Moorish arch. Jinnah’s tomb lies on an elevated platform rising in the middle of the stunning surrounding park, with beautiful moans and a set of 15 successive fountains that lead the eye towards the mausoleum.

On 23 March 1940, the All-India Muslim League passed a resolution that represented the decisive step towards the foundation of Pakistan. Twenty years later, on the site in Lahore where that historical event had taken place, construction work began on a commemorative monument, the Minar-e-Pakistan, which was completed eight years later. The Minar-e-Pakistan is a 62-meter-high minaret rich in symbols standing for the history of Pakistan. The tower is laid on an elevated base, in the shape of a five-pointed star, which comprises of four platforms. The stones used to build each platform are progressively more refined from the bottom up (ranging from uncut stones to polished white marble), to signify the difficult developments but final success of the Pakistan Movement for independence. Like Islamabad’s Pakistan Monument, this landmark’s lower part is built in the shape of a blossoming flower, from which the tower rises as a symbol of the country’s birth. The Minar-e-Pakistan is situated in a large park, quite popular among Lahorites, which is visible along with pretty much the entire city from the minaret’s top dome. 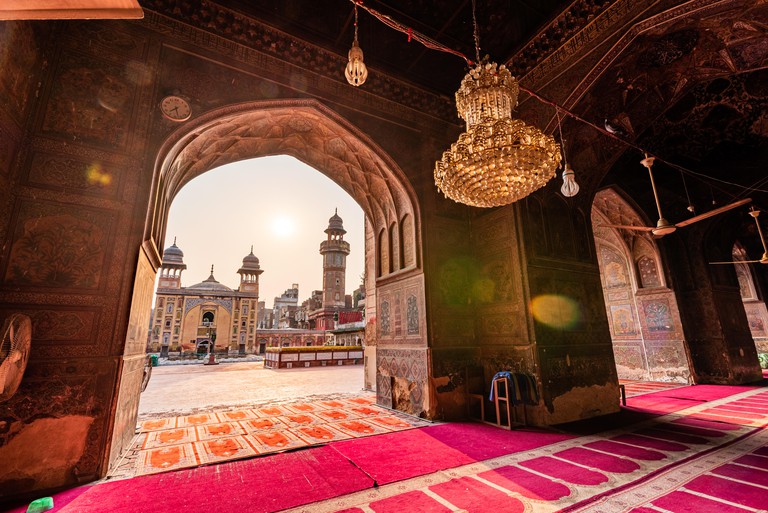 © Shahid Khan / Alamy Stock Photo
The Walled City of Lahore or Old Lahore is a historical and chaotic section of the Pakistani city which used to be protected by walls, and entered through 13 gates. Today, the walls are gone but most of the gates have remained. The Wazir Khan Mosque in Old Lahore can be reached by passing through the Delhi Gate. The magnificent mosque, with four minarets of about 33 meters each and five turnip-shaped domes, is built entirely with small bricks and was named after the governor who ordered its construction in 1634. One of the most beautiful mosques in Pakistan, it is best known for its incredible mosaics made from myriads of brightly colored glazed tiles. These are found all over the external and internal walls, and are so meticulous and rich in details that they make Wazir Khan a stunning piece of art, in addition to a religious site. This mosque is also famous for having been the first to include a 22-shop bazaar in its original planning, still today a unique feature among mosques worldwide.
Open In Google Maps
lahore, Pakistan
Give us feedback

A visit to the Derawar Fort requires a three to four-hour long trip with a four-wheel vehicle, but those with a soft spot for military structures won’t regret the journey. Found in the middle of nowhere, miles into the Cholistan Desert, the awe-inspiring Derawar Fort, built in 1733, dominates the landscape, and is characterized by a unique ensemble of 40 massive, largely intact bastions set all along the four walls. The ramparts rise about 30 meters above the ground, and the fort has an impressive circumference of 1.5 kilometers. Visiting the fort’s interiors requires a special permission by local authorities, and may not be worth the trouble of going through such process: the imposing bastions are in fact the real attraction of this striking landmark. While on site, however, visitors might also enjoy taking a look at the nearby mosque, an almost exact replica of the Moti Mosque right outside Delhi’s Red Fort.

When a beloved pet dies, what people usually do to keep its memory alive is preserve pictures and maybe a few objects to remember it by. In 1606, when Mughal Emperor Jahangir’s pet deer died, he had a minaret built to commemorate it. The Hiran Minar (Deer Tower) is situated in the Pakistani city of Sheikhupura, which briefly enjoyed the status of a popular hunting ground in the early 1600s. One day, during a hunting session, Jahangir spotted a deer he wanted to kill, but mistakingly hit his favorite hunting deer, Mansraji, instead. Feeling guilty, the Emperor ordered the construction of the minaret. Almost thirty years later, the mausoleum was enriched with an adjoining, large water tank; in the middle of the tank lies a picturesque octagonal pavilion, connected to the mainland through an elevated walkway. A rare celebration of the love of man for animals, the Hiran Minar is an attractive sight that certainly deserves to be seen.

The origins of the Lahore Fort, a stronghold in Old Lahore, are so ancient that it’s impossible to establish precisely when the fort was first constructed. It is known, however, that in the second half of the 16th century, the original mud-brick structure was demolished and rebuilt with burnt bricks. Since then, this fortified citadel has undergone numerous other modifications at the hands of almost all the rulers who reigned over Lahore, British colonialists included. As a result, it summarizes Pakistan’s amazing cultural heritage in the various artistic influences seen throughout its wide range of different buildings: mosques, mausoleums, palaces, audience halls, baths, watch towers, and more. A journey through Lahore Fort is in fact a journey through Pakistan’s past, and is for this reason recommended to anyone visiting the country.

The majestic Badshahi Mosque in Lahore is one of the most stunningly beautiful sacred sites for Muslims. Built in 1673, this mosque was the world’s largest for over 300 years until the Faisal Mosque was completed in 1986. Its huge courtyard, which stretches over an area of 26,000 square meters, remains the biggest in the world, and can host up to 95,000 worshippers. The mosque’s external walls are clad with red sandstone panels, painstakingly sculptured with beautiful, lotiform motifs and embellished with marble inlays. As per tradition, the mosque has four minarets and three domes, the central one bigger than the other two. These are coated with white marble, which creates a striking contrast with the dominating red. Travelers welcomed into the mosque through a grand entrance gate will discover that inside the building isn’t any less breathtaking, with its cornucopia of arches, stucco tracery and frescoes which never fail to astonish.