Muhammad Sumair Zawar proudly stepped to the plate wearing a dark green jersey with ‘PAKISTAN’ written across the chest in white lettering and the nation’s flag emblazoned on the right sleeve.

He watched the first pitch from Brazil’s Jean Tome whiz by him.

Members of the Pakistan national team who were all excitedly leaning up against the dugout railing at MCU Park cheered for their teammate’s ‘good eye’ then waved and gestured for the keepsake — a seemingly meaningless ball one — to be tossed to them.

Pakistan isn’t a baseball country in any sense of the word. Field hockey and cricket reign supreme, so to be playing in the World Baseball Classic Qualifier on a foreign, artificial turf field in a minor league stadium in Brooklyn, N.Y., was a big deal.

‘We are learning this whole tournament,’ coach Syed Fakhar Ali Shah said after the game. ‘It isn’t about winning and losing, it’s about learning. Every game, every ball, my players are learning.’

Pakistan, 23rd out of 120 in the world baseball rankings, lost 10-0 to Brazil in seven innings that day. They followed it up with a 14-0 defeat to Great Britain the following day.

‘The one thing I expected from them was them to be very competitive which they were,’ Brazil manager and MLB Hall of Famer Barry Larkin said. ‘You can see it’s a developing country, the game’s developing in their country and they’re making some of the same mistakes we made seven years ago. They definitely impressed overall, sure.’ 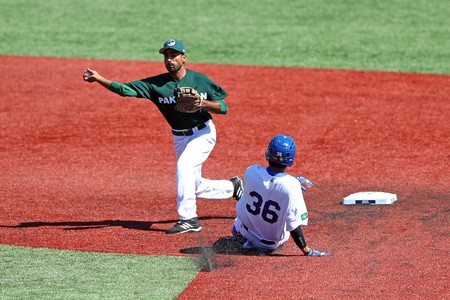 ‘We’ve been working for the last 20 years to promote baseball in Pakistan and one event like this equals 20 years because MLB, ESPN, New York Times are all here,’ Shah said.

Baseball was formally introduced in Pakistan by Shah’s father, Syed Khawar Shah, in 1992. The Pakistani national team has zero MLB-affiliated players or any born or raised in the United States — the only team in the WBC Qualifier, which also included Israel, Great Britain and Brazil, without at least one.

Domestic resources are slim. There are no real baseball fields in the country save two at the U.S. Embassy in Islamabad. Equipment — bats, gloves, balls — is hard to acquire.

It’s been up to the Shahs and the Pakistan Baseball Federation to try to promote and develop the sport with limited funding and resources. Shah scouted cricket players to field his team and most likely will have to continue to do so. It’s about converting cricket players (like third baseman Zubair Nawaz for example) to baseball players — bowlers to pitchers and batters into hitters.

‘Pakistan is a cricket country,’ Shah said. ‘Pakistan doesn’t have professional baseball coaches over there. Pakistan doesn’t have a stadium or a baseball field. In Pakistan, people know about the New York Yankees, they know about the Chicago Cubs and other major league teams. Now after Pakistan plays in this event (WBC Qualifier) people will start coming to the fields to play baseball. In the future we feel this is going to make it very good and the youth will start working on learning and playing the sport.’