Legendary singer Nusrat Fateh Ali Khan was born on Oct. 13, 1948, in Faisalabad, Pakistan. He learned Qawwali, a type of Muslim Sufi music which began 600 years ago, from his father. Becoming one of Pakistan’s most famous musical icons, Khan is celebrated not only in his native country but throughout the world for his contemporary take on the ancient Sufi music of Qawwali. Culture Trip explores the life and work of this influential figure. 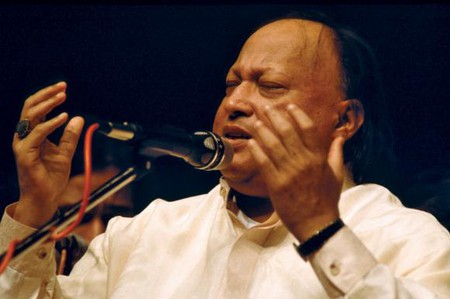 The fifth child of Ustad Fateh Ali Khan, Nusrat Fateh Ali Khan has four sisters and one younger brother. A musical family who focused on Qawwali, Nusrat’s father did not want his son to adopt the family profession, instead wanting him to select a more respectable and profitable career by becoming a doctor or an engineer, since at that time Qawwals were given a low social status. However, Nusrat showed interest in Qawwali, so his father finally changed his mind and started to train him in the art.

At this early stage Nusrat started to play tabla and alongside his father he learnt Raag Vidya and Bolbandish. After the death of his father in 1964 other musicians such as his uncle Mubarak Ali Khan and Ustad Salamat Ali Khan provided the requisite training for him. He gave his first performance, known as Chehlum, 40 days after his father’s death as part of the traditional mourning ceremony. By 1971 he was leader of his own Qawwali group and he gave his first public performance in Pakistan, known as Jashn-e-Baharan’, which was organised by Radio Pakistan. 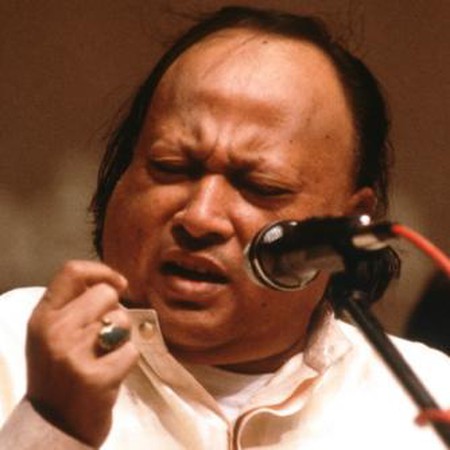 Nusrat Fateh Ali Khan was famous as a Qawwali singer on an international level. His melodic and soft voice was celebrated all over the world, and he was the first person to introduce Qawwali to an international audience. From London to New York and from Tokyo to Melbourne, Nusrat Fateh Ali Khan singlehandedly brought Qawwali, a 13th-century musical form of religious ecstasy, into the 20th century and to the attention of global audiences. He reached out to Western audiences with a couple of fusion records produced with music icons such as Peter Gabriel and Eddie Vedder. In addition he mentored rising new stars that included Jeff Buckley and Joan Osborne.

He was the first Pakistani to sing for Hollywood (his simultaneously soft and razor sharp voice featuring on the soundtracks for The Last Temptation of Christ, Dead Man Walking as well as reaching the Billboard Top 100. Peter Gabriel’s Real World label released five albums of Nusrat’s traditional Qawwali performances in the West. He also performed traditional Qawwali live to Western audiences at several WOMAD world music festivals.

Bollywood knocked on his door, not the other way around, and Khan sang extensively for Indian movies. Khan was also a prolific artist; the Grammy nominee cut more than 150 albums. Nusrat Fateh Ali Khan mostly sang in Punjabi and Urdu and also in Brajbhasha, Hindi and Parsian. His most popular performance was Dam Mast Qalandar Mast which was performed with folk style and traditional instruments.

His name is among the Guinness Book of World Records as a Qawwali artist. At the peak of his fame, Khan checked into London’s Cromwell Hospital for kidney and liver treatment. Nusrat died in London with kidney and liver failure on Saturday, August 16th, 1997. He was an endearing cultural icon of Pakistan and Qawwali music, and will be remembered for his music throughout the world.