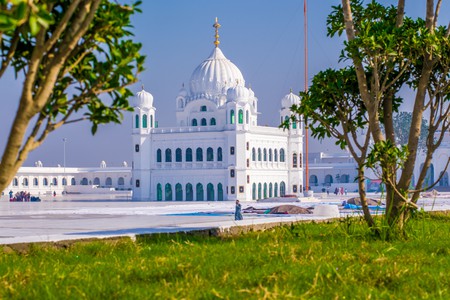 Culture Trip speaks to the small Sikh population in Pakistan as the country opens the Kartarpur Corridor, which will allow Sikh devotees from India to make a pilgrimage to the final resting place of Guru Nanak in the heart of Pakistan – sans a visa.

Since the partition of India, Sikhs account for a mere fraction of Pakistan’s fast multiplying population. Some counts indicate that at present, there are only 20,000 families belonging to the Sikh faith residing in the country. Scattered in pockets across the nation’s terrain and dotting its landscape from the shores of the mighty Arabian Sea to the foothills of the majestic K2; Pakistan’s Sikhs are a vibrant component of the country’s cultural fabric. It was here that the founder of Sikhism, Nanak Dev Ji, was born and also where he began preaching the religion in a city that is today named after him. 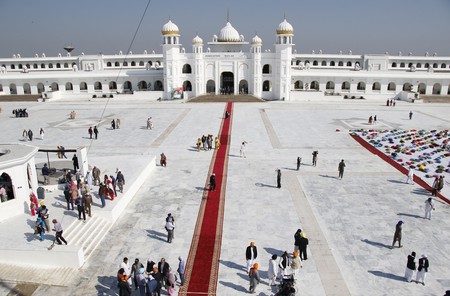 Sikhs account for a mere fraction of Pakistan’s fast multiplying population. Some counts indicate there are only 20,000 families belonging to the Sikh faith residing in the country | © SOHAIL SHAHZAD/EPA-EFE/Shutterstock

Ethnically, the Sikh community in Pakistan is unlike any other and in contrast to the Sikhs in other countries is culturally diverse. The largest clusters of Sikhs are said to be based in and around the cities of Nankana, Hasan Abdal and Peshawar. Other than a few families hailing from Punjab who intrinsically find their roots in the region; the majority of the community are ethnically 95% migrant – immigrants from the Barra Agency, Tirah Agency and other tribal areas of the country, as well as from Afghanistan. The cultural dynamics of these Sikhs are reflective of their Pashtoon (Afghani mountain people) lineage but they reside in the heart of Punjab. They are a community within a community and it is this very ethnic diffusion that makes them distinct.

News reporter Manmeet Kaur and her family are from Khyber Pakhtunkhwa in Pakistan’s north. When in May 2018, 23-year-old Manmeet joined the then newly launched television channel Hum News, she unknowingly became Pakistan’s first-ever female news reporter belonging to the Sikh faith.

With a degree in social sciences, Manmeet covers issues pertaining to human rights, minorities, local communities and non-governmental organizations. As a young woman from a minority community based out of conservative Peshawar, her insight into the challenges people face is first-hand and Manmeet believes, she is uniquely placed to highlight these issues. “In our family and in our community, women don’t venture out of their homes for purposes of work and my job entailed just that – my parents and relatives were worried, but I was adamant. I was keen to initiate change,” she says.

For the Sikh community, over several decades, the fear was real. After the 1947 division of India and Pakistan, pre-partition prejudices translated into discrimination that lead to several generations of Sikhs being brought up on uncertainty. Many families that had the option, chose to migrate. And those who stayed, often tried to conceal their identity so as not to stand out – some opting to give their children Muslim names and some even choosing not to sport the traditional beard or dastaar (turban). And more recently, in the wake of the ‘War on Terror’, open targeting of minorities by the Taliban until they were countered by Pakistan’s law enforcement agencies, forced the community to live in fear.

In recent years, however, Sikhs in Pakistan believe there has been a distinct shift in societal perspectives. The community feels it has of late garnered much admiration, which appears to be a recent phenomenon. There is a sentiment amongst the Sikhs that when the state decides to support a vulnerable group, there is automatically an uplift of the community. But despite the change in perspective at large, the community feels that sometimes discrimination or ignorance does raise its head. 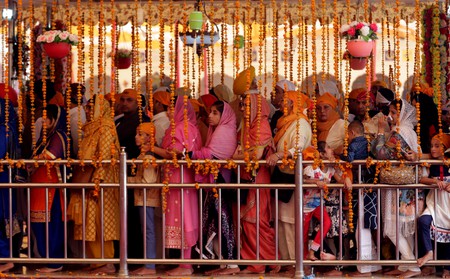 In recent years, Sikhs in Pakistan believe there has been a distinct shift in societal perspectives | © RAHAT DAR/EPA-EFE/Shutterstock

Manmeet says of the social paradigm, “I recently went out wearing sindoor (red hair powder) and a bindya (bindi) (both typically Indian) – I could see people staring at me from every direction. For a moment, I felt like an alien – an outsider in my own space. But I gathered my nerves and thought to myself, let them stare – people need how to learn how to accept and celebrate our differences”.

Social activist Nisha Kaur believes like the majority of the population, minorities too are faced with societal issues and pressures. However, the only form of discrimination she has ever faced personally, is when India plays Pakistan in cricket. “There is still a small percentage of people who think that the Indian team’s good or bad performance on the field impacts us – I’m not quite sure why,” she laughs.

A new generation of Sikhs

Over the decades, the dynamics of the Sikh community in Pakistan seem to have somewhat realigned. Traditionally known to be agriculturalists, businessmen and traders, there has been a noted shift towards a quest for higher education. This has made for greater opportunities for the community’s incorporation into the mainstream workforce. Journalists, government servants, cricketers, NGO workers and even politicians; Pakistan’s new generation of Sikhs are not only writing their own destiny, but also a new chapter in the community’s history.

An integral part of the community’s uplift, is the path-breaking, almost 5-kilometer-long (3.1-mile) corridor that from November 2019 connects the revered Sikh shrines of Dera Baba Nanak Sahib in Gurdaspur, India and Gurdwara Darbar Sahib Kartarpur in Kartarpur, Pakistan.

A diplomatic first, this much-anticipated project will make possible the formerly impossible. The Kartarpur Corridor will enable Sikh devotees from India to make their pilgrimage to the final resting place of Guru Nanak, in the heart of Pakistan without a visa. With over 300 gurdwaras (Sikh place of worship) across the length and breadth of the country, Pakistan has long seen a steady footfall of yatris (pilgrims) from across the globe, including India. However, following the inauguration of the Kartarpur Corridor, the numbers of devotees anticipated to make their way to the country are unmatched.

Ramesh Singh Arora, who became the first Sikh Member of Provincial Assembly of Punjab in the country’s then 63-year history sums it up nicely, saying, “this is Pakistan’s chance to show the world who we really are – as a country at large and as a community in specific, we look forward to welcoming people from across the world. Kushamadeed- Ji Aaya Nu (welcome)!”