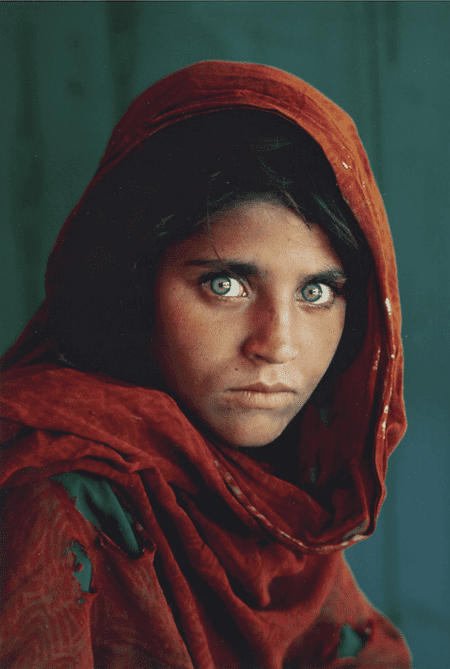 When Steve McCurry clicked a photograph of a young, hauntingly green-eyed Afghan girl glaring angrily from behind a red hear scarf, he didn’t quite expect it would go on to become ‘the most recognized photograph’ ever featured in the The National Geographic. Called ‘Afghan Girl,’ she became the global face of an Afghanistan trapped in endless wars, churning out massive flows of refugees to nearby countries. Years later, Afghan Girl, or Sharbat Gula, is back in the news – for having been arrested by Pakistan’s Federal Intelligence Agency (FIA), which claims she has been living illegally in the country.

The Pakistani agency, which arrested her from her home in Peshawar, the capital of Pakistan’s Khyber Pakhtunkhwa, claims that she has been using forged identity documents to stay in the country. If convicted by the courts, she could be sentenced to up to 14 years prison time and charged a fine of between $3,000 and $5,000.

Steve McCurry, in a post on his Facebook account, expressed his objection to the news and remained committed to ‘doing anything and everything possible to provide legal and financial support for her and her family.’ Saying that she has now become ‘the face of unwanted immigrants,’ when she had been ‘the symbol of refugees for decades,’ McCurry urged the international community to speak out on behalf of migrants everywhere.

Sharbat Gula has been the symbol of refugees for decades. Now she has become the face of unwanted migrants. As a widow, she has endeavored to raise her four children alone. She represents all brave women and men who will endure any pain and hardship to protect the most precious thing they have – their children. In the past few hours, we have made contact with a prominent human rights attorney in Pakistan, who will take her case. We urge the international community to speak out on her behalf and for the millions of others who simply need a place to live without fear.

For nearly 17 years after being immortalized in the cover of the June 1985 issue of National Geographic Magazine, one of its most famous ever, her identity was a mystery. Neither McCurry nor the magazine could trace if she had survived the wars until they located and did a story on her in 2002. By then, she had left the refugee camp of Nasir Bagh in Peshawar, from where she had been photographed, to live in the mountains near Tora Bora in Afghanistan. She was even the subject of a documentary that aired in 2002, tracing McCurry’s efforts to locate her years later.

Pakistan has been absorbing refugee flows from continuously war-torn Afghanistan for more than three decades. Some three million Afghans are estimated to be living in Pakistan, about half of whom are said to be unregistered. In spite of having called the country home for decades now, they live in constant fear of expulsion and harassment from law enforcement agencies.

Though Pakistani authorities, with the help of the United Nations High Commission for Refugees (UNHCR), have been running a repatriation program for Afghan refugees in the country, most Afghans aren’t prepared to return to a still highly unstable Afghanistan. However, in December 2015, Pakistan issued a six-month deadline for the refugees to leave, which it later renewed for a few more months earlier this year.