11 Dishes to Eat When You're in Karachi, Pakistan 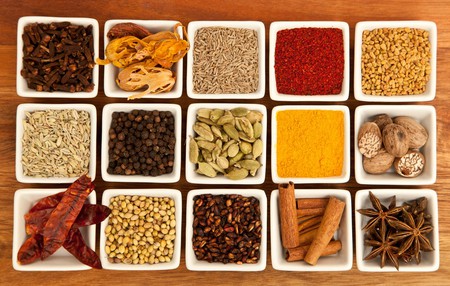 Just like the city itself the cuisine of Karachi is a mixture of numerous different influences. Many ethnic groups and traditions have contributed their flavors, spices and methods to create a unique collection of tantalizing foods that is on the spicier side with a focus on fragrance and meat. Here is a list of the top 11 dishes you must eat when in Karachi.

You wouldn’t want to miss out on the delicious National Dish of Pakistan in Karachi. One of the greatest influences on the food here comes from the Urdu speaking Karachiites who immigrated at the partition of the Indian Subcontinent. Nihari is one of the dishes that was brought along, and as most of the Urdu speaking populations are settled in Karachi their cuisine in its most authentic form is also found here. The dish is basically a stew of meat like beef, lamb, mutton or chicken cooked slow along with the shank and bone marrow and with a Naan, oven baked bread. Some sources connect the origins of the dish to 18th century Delhi during the last kings of the Mughal era or to the royal dining in Awadh’s palaces in modern day Lucknow, India. 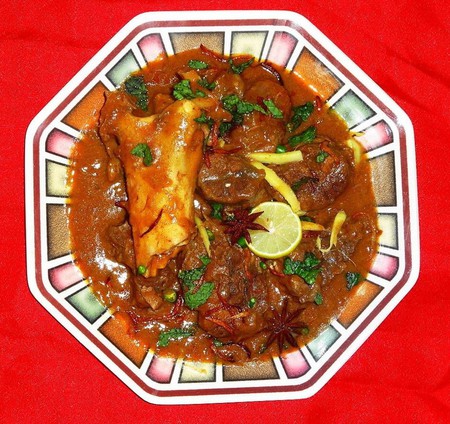 Biryani is a rice mix dish owing its origins to the Muslims of the Indian subcontinent. It’s a dish comprised of spices, rice and meat with potatoes being added sometimes as well. Biryani is one of the most popular South Asian dishes found extensively, albeit in different forms, in central and southeast Asian countries as well. Different communities in the Indo-Pak region have their own varieties of biryani going on like Mughlai in North India, Awadi in Lucknow, Hyderabadi, Sindhi, Bohri and Memon in Karachi and different parts of India, and Malabari in the South India. The dish came to Lahore and Karachi in Pakistan too as the Mughal rule spread there. 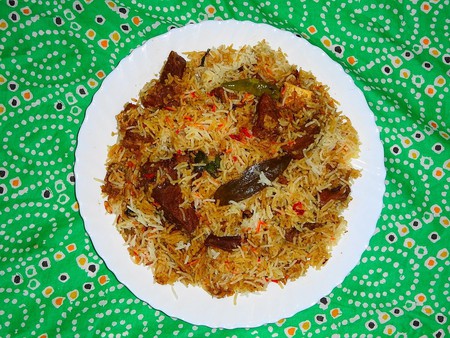 Another must have dish when in Karachi is the Chicken Karahi. This spicy dish gets its name from the wok it’s cooked in, called Karahi in Urdu. All Pakistani resturants catering to local cuisines will serve the dish. Ingredients like ginger and tomatoes are the prime flavors of this tasty dish along with chicken or other meats. 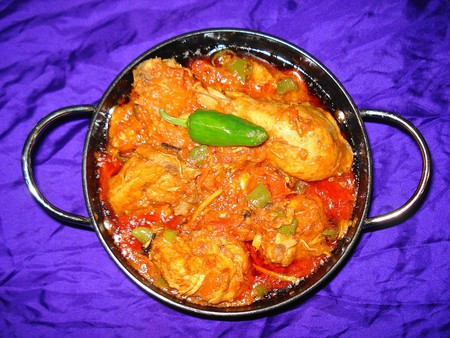 Chicken Tikka originated from the Punjab region and is popular in both Pakistan and India. The dish is prepared by marinating chicken meat, with spices and yogurt and then cooking it over fire using skewers. Its the same as Tandoori Chicken and is referred in Karachi mostly as chicken tikka whether the meat is boneless or not. Its a dry dish so its often served with cut limes, yogurt or green chilli and mint dips and is eaten with roti or naan bread. 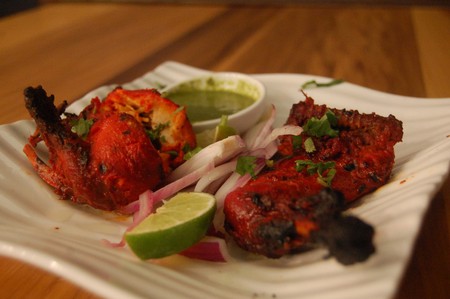 Handi is a creamy delicious aromatic dish made from a large number of ingredients but cooked in a short span of time. It’s a dish most people love to eat out because of its exquisite taste originating from Mughal and Punjabi influence. The dish gets its name from the earthenware pot or Handi in which it’s meant to be cooked however it can also be made in a wok or karahi. 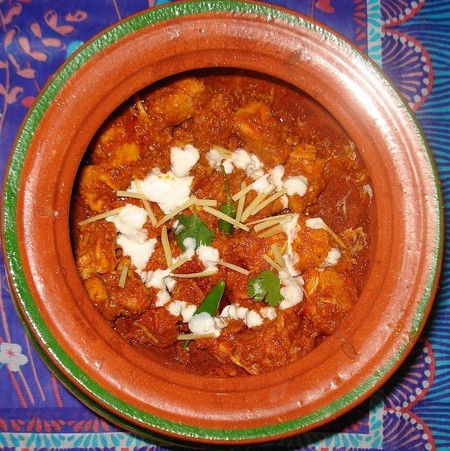 Seekh Kebabs are among the many other kebabs that are widely loved in Pakistan. They are made either of chicken, lamb or beef and are molded along the skewers before being barbequed over fire. The meat is minced and mixed with different spices and herbs before cooking and is served with naan or rice, raita (yogurt dip) and simple salad. 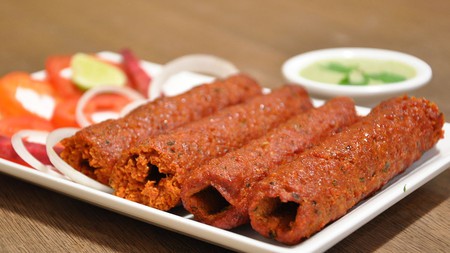 Originating from Punjab’s Lahore province Katakat is widely popular in Pakistan and some of the best Katakat can be found in Karachi’s street stalls and restaurants. It’s a fried mince of various offal like brain, heart, kidney, liver, lungs with lamb chops in butter. The dish gets its unique name from the kata-kat sounds made on the large fry pan while chopping the meat as it’s being fried. 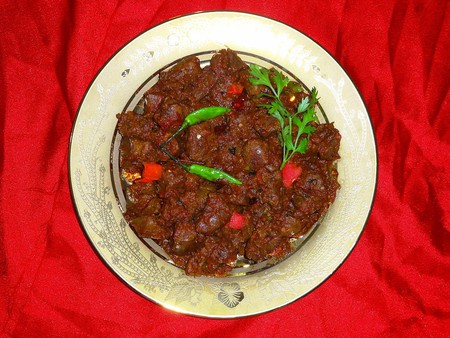 Koftas are meatballs consumed in many countries but in Pakistan they are served dipped in a spicy gravy sauce and can be eaten with both rice and bread. Different meats can be used to prepare the dish. Usually ground beef is used with onion, spices and salt to make this scrumptious delicacy. Yogurt, cream and cottage cheese may also be added. 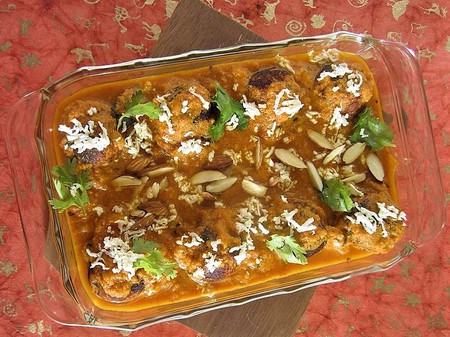 This is a dish known for its sticky consistency coming from the trotters or the hoof of the animal that is used to make the stew. Beef, goat, buffalo or sheep trotters are mostly used to cook Paya along with various spices. The dish was traditionally slow cooked over night to make the bone and meat juice seep into the soup where as now it still takes a couple of hours with the use of pressure cookers. Chickpeas are also added into the stew sometimes. 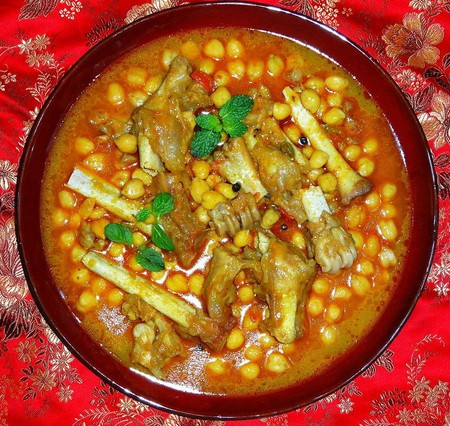 Haleem is a thick stew of flour, soup, lentils, barley, meat and spices. It’s one of the most popular dishes in Karachi because of its taste and nutrional benefits. This unique dish should be devoured in the street stalls on Karachi. Haleem is also popular in different varieties in central Asia. The dish is usually topped with lemon juice, fresh ginger, chopped green chilies and fried onion. 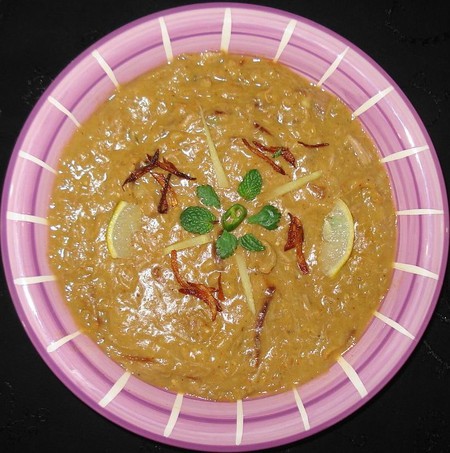 Chicken Malai Boti gets its name from Malai or fresh cream that is used to marinate the meat along with spices before it is barbecued. This gives the meat a unique smooth, soft flavorful bite. It’s one of the most popular dishes in Karachi because of the winning combination of spiciness and the creamy base which makes the chicken meat almost melt upon eating. 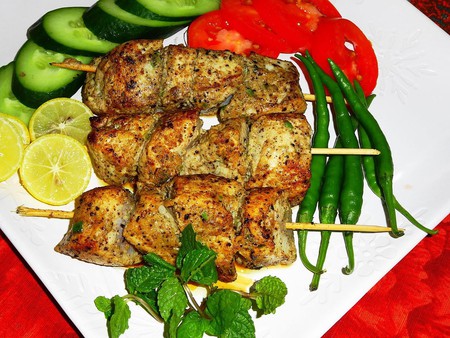