A Glimpse Inside North Korea With Oliver Wainwright 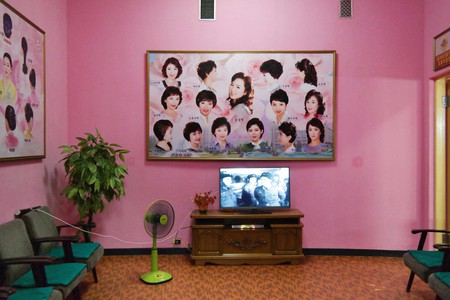 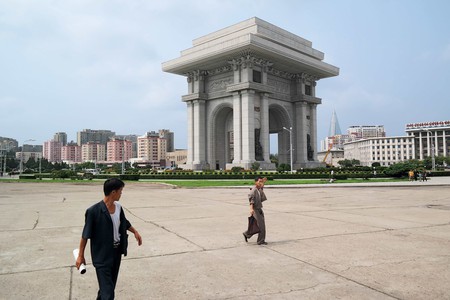 The Arch of Triumph, which is modeled on the Arc de Triomphe in Paris | © Oliver Wainwright / Courtesy of TASCHEN

A fascinating, mysterious country known for its precise displays of military might, one might expect a rather homogenous display of design in North Korea (DPRK). But the variance of styles confounds any assumptions we have of sameness. Architecturally, it ranges from Stalinist bombast (wide boulevards, intimidating towers) to heavy symbolism and kindergarten kitsch. Regardless of form, DPRK’s architecture has always been about control. And it’s within this calculated, choreographed urban space that, in the words of Oliver Wainwright, “an idealised image of power and order is played out.”

Wainwright’s study of North Korea begins in July 2015, with an eight-day visit to the capital with Koryo, a Beijing-based tour company founded by British lecturer, film producer, and author Nick Bonner. Wainwright first met Bonner at Biennale Architettura in 2014, where the latter was co-curating the Korean pavilion. “[There were these] retro sci-fi visions, hovership hotels, buildings shaped like gigantic water wheels, like scenes from a Jetsons cartoon. What really caught my interest was when Nick said, kind of mischievously, ‘It’s not that different than what they’re actually building there,’” Wainwright says.

During the trip, Wainwright discovers Pyongyang’s architecture through a meticulously controlled lens: each historical anecdote and statistic carefully memorized by the official guides, the tour shuttling to and from monuments proudly displaying plaques inscribed with the number of times political leaders had visited. “All of the pictures [in the book] were taken on that one trip. It was all shot hand-held, no tripod, and very much on the hoof. It was a jam-packed schedule. We must’ve seen 10 sites in each day. It was a choreographed, curated tour, as you would expect in North Korea,” he says. 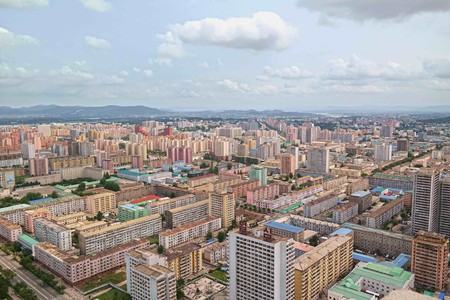 Unsurprisingly, the itinerary didn’t include downtime to ask the locals for their opinion. “It’s very hard to talk to average, local people on the street, but the impression I got is there is an excitement about these projects in the capital. They’re building streets and streets of skyscrapers, all with these slightly sci-fi forms. The latest 40-story tower is crowned with a kind of satellite sculpture; the science center is shaped like an atom with these sterical pods emerging from the rooftop,” he says. Dramatic and at times colourful, the world Wainwright documents is a far stretch from the bleak, grey world of our Western imagination.

Likening North Korea’s architectural devices as a “tool to command emotion, devotion and obedience,” Wainwright outlines the cityscape as a theatrical stage where the ubiquity of totalitarian power can be understood, felt, and fully realized through its Juche architecture. According to World Atlas, Juche is an ideology that emphasizes the DPRK’s “political, economic, and military self-reliance…it is through subordination to a great leader that the masses can achieve [it].” Wainwright uses Juche architecture as a framework to analyze the political, cultural, and socio-economic changes within the DPRK.

Juche took hold after US bombs destroyed Pyongyang during the Korean War. In 1953, Kim Il-sung attempted to reconstruct the capital with a new vision that embodied the principles of self-reliance, with a Marxist-Communist bent: new designs would be distinct, cultural products of North Korea.

The initial urban planning would, in reality, be heavily influenced by the imposing rigidity of Stalinist Neoclassicism. The Russian influence resulted in the city’s extraordinarily wide streets, towering skyscrapers (with largely vacant upper floors), and palatial, severe structures.. 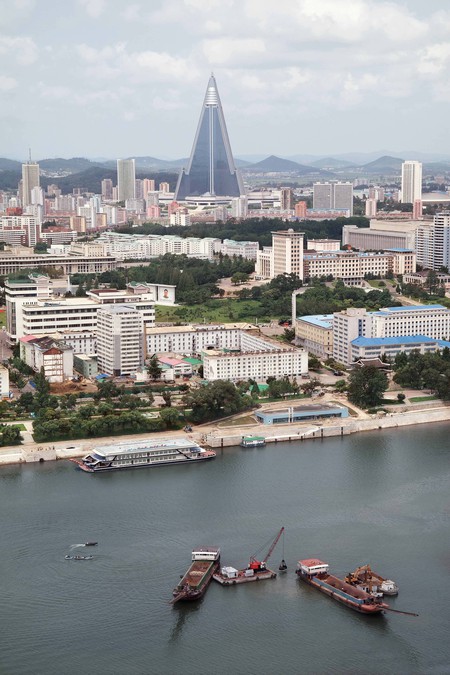 The Ryugyong Hotel (nicknamed the 'Hotel of Doom'), built in 1987, was intended to house 3,000 bedrooms and five revolving restaurants | © Oliver Wainwright / Courtesy of TASCHEN

Eventually, Korean architects dug into the country’s own history for architectural cues. “[Pyongyang] is a strange hybrid between Moscow and Washington DC, in a sense because of the axial planning,” Wainwright says. “But it’s unlike both of those because it does have this garden-like quality. [It was] planned around two very substantial hills, and there are two rivers that run between those. It’s quite an undulating, picturesque topography, and they’ve taken advantage of that.”

As North Korea turned away from outside influence, Pyongyang slowly became a city steeped in DPRK’s deliberate symbolism. The number of blocks used to construct the Arch of Triumph, for instance, correlate to Kim Il-sung’s 70th birthday. The floral signifiers, oversize statues, and gigantic landmarks are all used to bolster the DPRK’s ideology, uphold and cement the power of the leaders, and present a depiction of a secure, autonomous state.

“Kim Jong-il very explicitly states in [On Architecture, 1991] the arrangements of apartment blocks around either side of the monuments [should] give an impression of crowds looking up an cheering at the leader. He’s really using architecture to frame, and exaggerate, these feelings of power, and being overwhelmed by the leader,” Wainwright says. 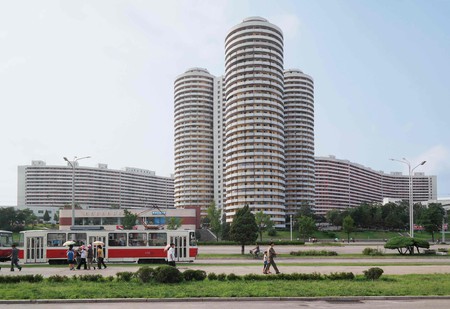 Today, with its recent construction boom and newly opened doors to tourism, the DPRK has seen a wave of new high-rise apartments (with an “eerie beauty to [the] new squeaky clean interiors”), amusement parks, massive shopping centers, and even novelty architecture (like a whale-shaped dolphinarium). It’s a fantastical playground saturated in pastel shades and kaleidoscopic color, bordering on a glorified camp aesthetic, although the crumbling infrastructure of capital’s outskirts present a very different depiction of North Korean life.

“Having moved from palatial Stalinist piles to expressive concrete structures, via the odd techno-futuristic whim, kindergarten kitsch is the logical next step for a regime intent on projecting an image of carefree prosperity,” writes Wainwright.

But when did this fusion of Techno-Futurism and kindergarten kitsch really begin taking off in North Korea? Wainwright says that it became more apparent in the 1980s, when the country began preparations for the World Festival of Youth and Students – a “kind of Communist Olympic Games,” he explains. “It was the first time they really had this level of international exposure. They used 1989 as a deadline to build a whole series of trophy projects, from the national ice rink, which is shaped like this futuristic concrete TV, to the weightlifting arena shaped like a giant pair of dumbbells,” he says. “They were keen to project of image of modernity to these visiting guests,” he continues.

But when Kim Jong-un came into power, the architecture of the cityscape transformed yet again. “One of the official patriotic slogans published in 2015 was ‘Let’s turn the whole country into a Socialist fairyland,’ and [Kim Jong-un’s] buildings and interiors have a very child-like quality to them. Whether it’s the pastel color palettes or the slightly more cartoonish forms, I think it’s a way to infantilize the population,” Wainwright says.

“If they can distract people with these sugar-colored, saccharine architectural objects and theme parks, it might distract people from living under this very authoritarian regime,” he continues. “You can look at China as an example of the evolution of Communism: they know exactly how much to give people to suppress a political revolution, and I think Kim Jong-un is following in that path.” 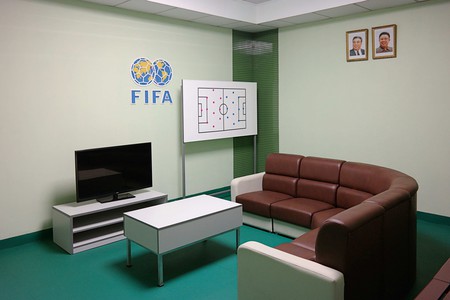 Support rooms of the Rungrado May Day Stadium, built in 1989 | © Oliver Wainwright / Courtesy of TASCHEN

To read Oliver Wainwright’s Inside North Korea, click here. For a look at North Korea’s design ephemera and motifs, check out this story.