Why Environmentalists Are Fighting to Save Nepal's Karnali River 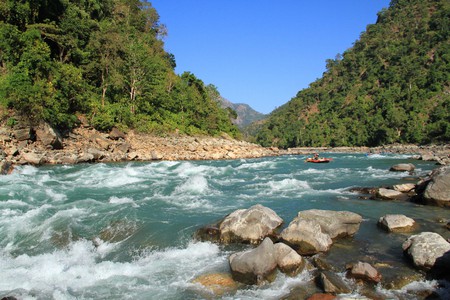 The Karnali River | © GRG's Adventure Kayaking
In association with

The Karnali River is Nepal’s longest, at 507 kilometres, originating near the holy Mount Kailash in Tibet. It flows down into India, where it becomes the Ghaghara River, a tributary of the holy Ganga. The river starts high in the rainshadow of the Himalayas and flows down through the jungle in remote Western Nepal, watering the habitat of all kinds of wildlife as well as villages. It’s a favourite among white-water enthusiasts and is the only major river in Nepal to not be dammed. But, it is in danger from hydropower developments. Here’s why -and how – environmentalists are fighting to save the Karnali River.

Development in Nepal has happened at a rather haphazard rate, hindered by the country’s rugged topography, inaccessible remote communities and political instability (the country suffered a civil war between 1996 and 2006). Now, 10 years after the country officially became a republic, some infrastructure development projects that have been talked about for a very long time are gaining momentum. But this isn’t necessarily good news for all. 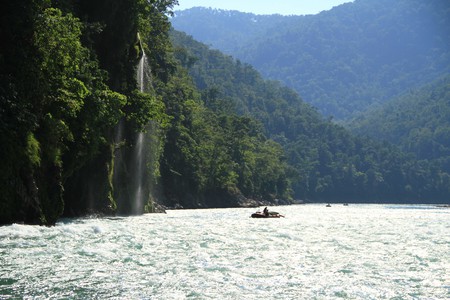 The tallest dam in the world

An Indian company, GMR, won the bid to build the long-talked-about Upper Karnali Hydropower Project in 2008. The proposal to build a 410-metre dam would make it the highest dam in the world. It would be capable of producing more than the country’s current energy needs, according to the Nepal Government.

Certainly, power generation has been a major problem throughout Nepal. In Kathmandu, until recently, load shedding power cuts were scheduled to spread power needs throughout the city and not overload the system. In winter, when the hydro dams that supplied electricity to the city were at their lowest, power cuts could last as long as eight, 10 and even 12 hours. Household life suffered, but so did industry.

So, it may seem reasonable that the country needs the means to produce more power. But, things are a bit more complicated than that. Conservationists question whether the losses of the proposed project would outweigh the benefits.

Villagers living along the Karnali are likely only to be compensated US $8,000-10,000 per 500 square metres of land that is lost to the hydropower project. For some locals, the promise of economic development is welcome. The Karnali flows through an extremely remote, under-developed and poor part of the country, where jobs are scarce. The Government of Nepal claims that 3,000 local jobs will be created.

However, there is skepticism over how many of these jobs will really go to local people. Plus, it’s doubtful how much Nepal will benefit from a project being undertaken by an Indian company, especially as the hydropower project (if completed by the current owners of the bid) plans to send 75% of the generated electricity to India. 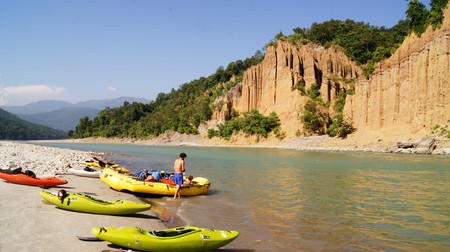 Kayaking and rafting on the Karnali River | © GRG’s Adventure Kayaking

River conservationists want to see the Karnali River kept free-flowing for a multitude of reasons.

The Karnali region is an extremely important wildlife habitat. The river is known to be home to 179 fish species. Many wetland-dependent animals rely on the periodic flooding of the river for their habitats. Nepal’s Bardia National Park, in the southern catchment of the river, lies close to the border with India. India’s northern wildlife reserves share similar flora and fauna to those on Nepal’s Terai (plains). Wildlife corridors are an important way to ensure the diversity of wildlife and prevent inbreeding of species. A proposed Karnali wildlife corridor to facilitate the north-south movement and intermixing (as well as breeding) of rhinos, elephants and tigers would be adversely affected by the building of the dam. Wildlife conservationists believe that any infrastructure development in this area should take into account the needs of the unique ecosystems found here, but so far, this is not what has been proposed.

The river is also a major tourism asset, as rafting and kayaking companies take groups on a 10-day Karnali River trip many times a year. The Karnali River is one of the finest in the world for white-water rafters and kayakers, with highlights being its clear blue waters, white-sand beaches and a seven-kilometre-long gorge that is one long rapid.

The river also has the potential to be developed further into a pilgrimage site. The river originates near Mount Kailash, which is holy to Buddhists, Hindus, Jains and the pre-Buddhist Bon religion. The mountain itself is already a pilgrimage site and the river has similar potential.

Megh Ale, a conservationist and river guide, has been especially active in his efforts to save the Karnali. He co-founded the Nepal River Conservation Trust in 1995. Ale envisions the creation of a Karnali River National Park, stretching along the length of the river, which would be a valuable addition to Nepal’s other numerous and well-protected natural areas.

In collaboration with other concerned groups, such as the International Waterkeeper Alliance, the Nepal Kayak Club and other tourism operators, Ale has been running ‘Save the Karnali River’ expeditions. On these, tourists can join conservationists, scientists and journalists to enjoy the beauty of the Karnali River and learn more about the need to save it. Similarly, the Save the Karnali River organization is conducting a Scientific Expedition in 2018 to gather further data about the river and its ecological and social importance. 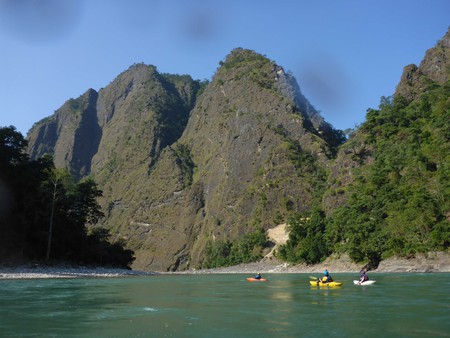 The Karnali hydropower project has been stalled for around 20 years already. Now, the company granted the permission to build it, at a cost of around one billion dollars, can’t raise the money and wants support from the World Bank and other international lenders. So far, this hasn’t materialized, yet conservationists’ efforts to save the Karnali are not slowing down or fading away. Too many South Asian rivers and the unique biodiversity and cultures that they support have already been lost to insensitive development, so the struggle to stop the Karnali River from being another victim is all the more important.