A Guide To The Dishes and Food Of Nepal

Nepalise Cuisine combines a range of ingredients, techniques and characteristics from its neighboring countrie,s with its own gastronomic history. 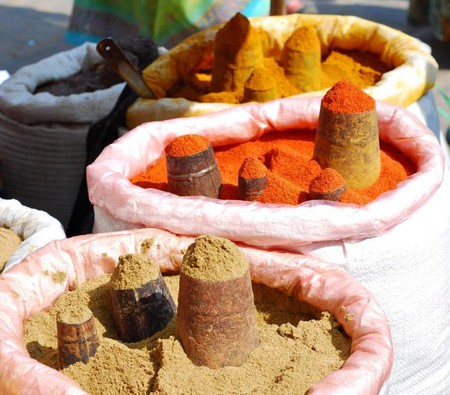 Set against the backdrop of the Himalayas, the people of Nepal have many different backgrounds and ethnicities, and this multitude of influences is reflected within the country’s cuisine. Nepalese dishes are generally healthier than most other South Asian cuisine, relying less on using fats and more on chunky vegetables, lean meats, pickled ingredients and salads. Whilst Nepal does take heavy influences from its closest geographical companions such as India, China and Tibet, this mountainous country only opened up its borders to outsiders in the 1950s. This factor, in addition to transport and trade difficulties Nepal’s geographical setting, has maintained a focus on using locally grown produce.

Common ingredients found across Nepalese cuisine include lentils, potatoes (which are particularly popular within the Newar communities in the Himalayas and Pahar region), tomatoes, cumin, coriander, chilies, peppers, garlic and mustard oil.

Yoghurt, or dahi is popular across Nepal, and is eaten for its healthy attributes and adaptable nature, as it can be used as a side dish or as an ingredient in drinks (Lassi) and desserts (Sikarni). While establishing a group of foods that are distinctly Nepalese is no easy task, there are some dishes that are mainstays when visiting the culturally diverse Nepal. 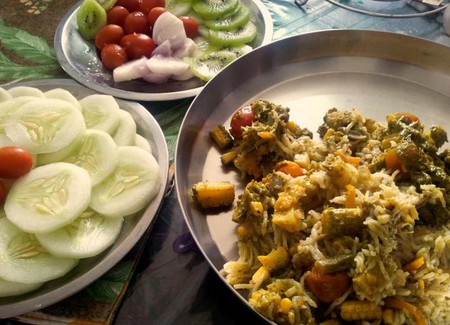 Rice is the obvious staple for many Nepalese dishes, just like many other Asian countries. The fried rice dish of Pulao (also know as Pilaf and Pilau) is popular with locals and visitors. Vegetable pulao in particular can be found throughout Nepal, and consists of fried rice with vegetables which have been lightly seasoned with turmeric and cumin. Accompaniments to the dish can vary from yoghurt to papadams, and the subtle flavors brought out by the fragrant rice means the dish is a regular feature at social events and times of celebration within the country. 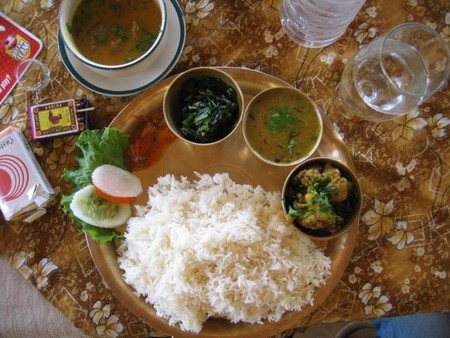 Due to farming restrictions in some of the higher regions of Nepal, rice is often substituted with other grains, such as cornmeal and barley, in addition to potatoes, unleavened breads and dhido (a porridge-like consistency, made using flour and hot water). This is most obvious when looking at the indisputably popular dish, Dal Bhat. If Nepal had a national dish, this would be it. Having crossed the border from Bengal, Dal Bhat consists of a rice (or substitute) centre, alongside lentils which are surrounded by various different dishes. Sides can include pickles, curried dishes, meat or fish, yoghurt, and chutney. Rice in Nepal is regularly replaced with roti, an unleavened bread. The variations of this dish are countless, but it is important when visiting to try at least one of them in order to get an authentic taste of Nepalese cuisine. 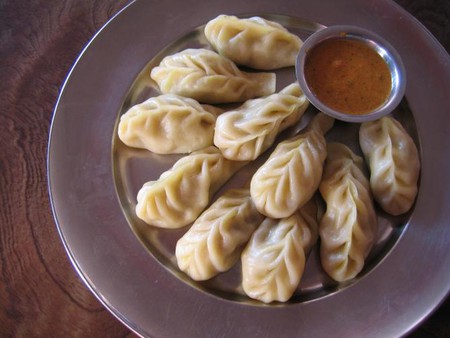 Momo are Nepal’s version of dumplings, and usually contain steamed vegetables or meat. Momo are usually accompanied by one or two dips, often with a tomato base or fermented vegetables. Condiments in Nepal are sometimes quite spicy, and often contain raw chili and garlic. Similar to the Gyoza found in Japan, momo are also consumed in parts of India, Bhutan and Tibet, and are a very popular snack. There are some interesting variants of momo, with fillings involving cheese (paneer or chhurpi) or potato. For the most flavorsome momo, the traditional meat and vegetable varieties are a must eat. For good quality Nepalese dumplings, in addition to other traditional foods from Nepal, travelers favor Rosemary Kitchen & Coffee Shop in Kathmandu. 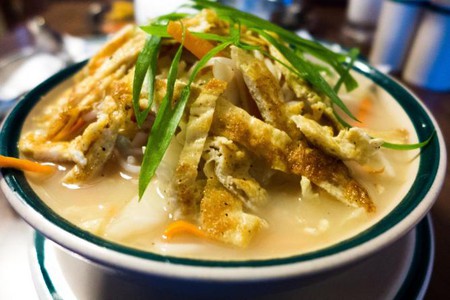 Thukpa is a Nepalese hot noodle soup, containing pieces of meat and vegetables. This wintry delicacy is popular in Kathmandu and other mountainous regions of Nepal, being a warming and comforting dish. Meaning ‘noodle’ in Tibetan, Thukpa takes influences from both Tibet and China, and is often seen eaten alongside momo. The carefully seasoned meat stock gives the dish a very pleasant aroma, meat toppings reflect the fauna of Nepal, and can range from yak, goat, and lamb to chicken. The dish is particularly popular across Nepal and Tibet but the Nepalese version is sometimes spicier, making it more popular than its Tibetan counterpart. For an enjoyable vegetarian Thukpa, the Green Organic Cafe in Kathmandu dishes up vegetarian options of most of the best Nepalese dishes. 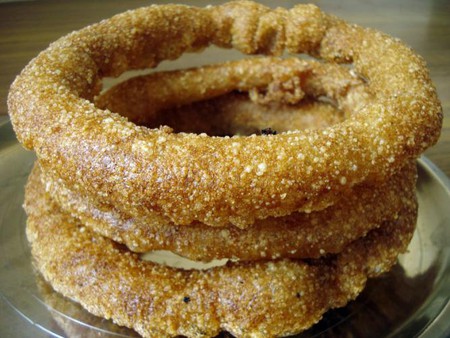 Sel roti is a cross between a doughnut and a bagel, but sel roti is actually made of rice flour and is like no other bread in the world. A crispy and sweet outer surface gives way to a puffy and soft-textured dough. The rice flour bread is deep fried and worked into a circular shape. The perfect snack or breakfast treat, they are often consumed during Tihar and Dashai religious festivals. Perfect when dipped in yoghurt, alongside vegetables, or simply enjoyed by itself. Sel roti can be found from street vendors, and is best eaten fresh.

Another winter favorite, Gorkhali lamb is an intense and filling curry dish. The curry is chunky and involves slow cooking the lamb (often lamb chops), adding chunky potatoes and roughly chopped onions. For more flavor, the lamb is often grilled and sealed with a chili mixture before being transferred to the sauce. Rice makes a nice addition to the finished dish, but sometimes a good Gorkhali curry is best when scooped up with some roti. For a selection of curries from Newari and Nepalese cuisine, many visitors head to Nepali Chulo in Kathmandu, which has become famous for its live cultural shows and traditional Nepalese food.