ASIA
/
NEPAL
/
Things to Do

Chitwan National Park: the Centre for Jungle Safari in Nepal 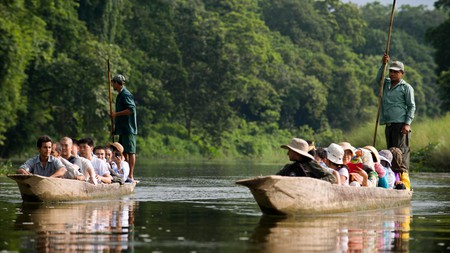 Home to over 700 species, the Chitwan National Park is the best place to go on safari in Nepal | © Alamy Stock Photo

Chitwan National Park – in the Terai lowlands region of Nepal – is one of the top wildlife safari destinations in Asia and home to over 700 wildlife species. These include the extremely rare one-horned rhinos, clouded leopards and Bengal tigers. The subtropical forests and grassy plains cover an area of 952sqkm (367sqmi), contrasting sharply with rugged Himalayan landscapes. If you’re planning a trip to Nepal, it’s certainly worth fitting Chitwan National Park into your itinerary – enjoy our guide to give you a taste of what to expect.

You can spend two nights in a luxury lodge and enjoy a Jeep safari in Chitwan National Park as part of Culture Trip’s exclusive 11-day Nepal trip, led by our Local Insider.

Formerly a royal hunting ground, Chitwan National Park became Nepal’s first national park when it was established in 1973 to protect the area’s wildlife from poaching – particularly Bengal tigers and one-horned rhinos, whose populations had been diminished to critically low levels.

Today, the park is an increasingly popular destination for travellers keen to venture beyond the mountainous regions of Nepal and experience a totally different side to the country, attracting an average of 180,000 annual visitors. The success of its ongoing conservation efforts has earned Chitwan a reputation as one of the best-preserved national parks in Asia – therefore, one of the most biodiverse places on the continent. 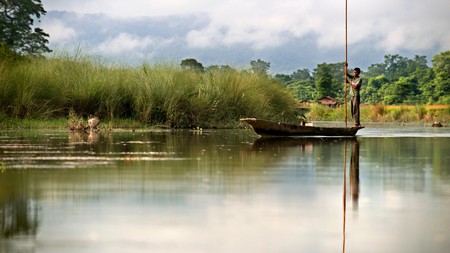 Animals to look out for in Chitwan National Park

Along with Kaziranga National Park in India, Chitwan is one of only two places in the world with a population of over 100 one-horned rhinos, which, alongside African white rhinos, are the largest of all rhino species. Bengal tigers – the biggest of all big cat species – are also a magnificent sight to behold, if you’re lucky enough to spot one, of course.

It’s not just rhinos and tigers that are worth visiting for, though. Chitwan is home to 68 species of mammals, 126 species of fish, 56 species of reptiles and amphibians and one of the highest concentrations of bird species in the world – over 344 in total, including Indian pittas, Bengal floricans, crested serpent eagles and emerald doves.

If you go on a boat safari on the Rapti River, keep an eye out for gharials – a critically endangered, fish-eating crocodile species, recognisable by its long, thin snout. On game drives, you may also see Asian elephants, gaurs and hyenas in the grasslands – along with sloth bears, wild boars and grey langur monkeys in the jungle. There have even been sightings of cloud leopards on several occasions in recent years – although the chances of encountering one are slim at best. 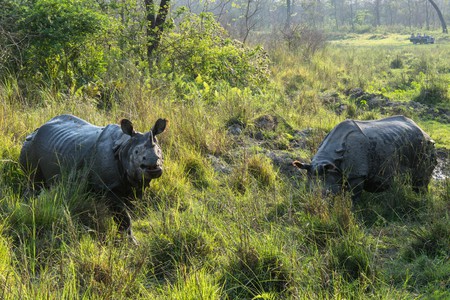 When to visit Chitwan National Park

October through to March offers the most comfortable conditions for wildlife viewing in Chitwan National Park, with minimal rainfall and daytime temperatures hovering around 25°C (77ºF) on average. January and February are particularly good months for spotting animals as villagers harvest the long grass, making sightings much easier.

April and May – while considerably hotter and slightly wetter – coincide with the end of the dry season and when animals congregate at waterholes, so your chances of spotting a rhino or a tiger are increased. Just be prepared for hot and humid temperatures, often exceeding 35°C (95ºF).

It’s best to avoid the monsoon season between June and September, as flooding is common and wildlife safaris are practically impossible. 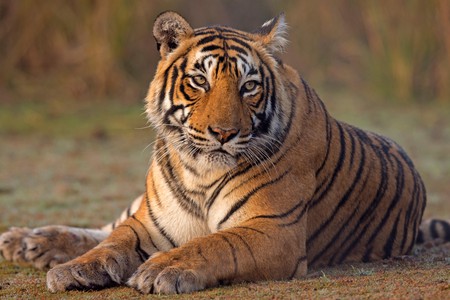 How to get to Chitwan National Park

By far the most convenient way to get to Chitwan National Park is by air. With domestic airlines – such as Yeti Air and Buddha Air – you can fly directly from Kathmandu or Pokhara to Bharatpur, which is 6.2mi (10km) outside of the park – and from here, take a taxi to your accommodation. Flights only take 25 minutes from Kathmandu and 20 minutes from Pokhara.

The much cheaper alternative is to travel by bus, which takes between five and seven hours from Kathmandu and a similar amount of time from Pokhara to the village of Sauraha, just outside the park. Tourist buses depart at 7am daily from Sorakhutte – near the Thamel district – in Kathmandu and from Pokhara’s main bus stop.

If you don’t mind spending more for extra comfort, Greenline Tours run a deluxe bus service to Meghauli (on the edge of Chitwan National Park) from Thamel in Kathmandu and lakeside in Pokhara – complete with free Wi-Fi and air conditioning on board, plus a buffet lunch en route. You can book tickets online in advance: check the website for prices at the time of your visit.

If you like to feel your hair stand on end, you could let the adrenaline flow on a white water rafting and wild camping adventure along the Seti River – starting in Damauli and ending up in Gaighat, around an hour’s drive from Chitwan National Park. It’s one of the highlights of Culture Trip’s specially curated 11-day Nepal adventure, led by our Local Insider.

Where to stay near Chitwan National Park

There are no resorts within the boundaries of Chitwan National Park, but there are plenty of options nearby – ranging between luxury lodges and traditional homestays. The main village on the edge of the park is Sauraha – where you’ll find a plentiful choice of accommodation, bars and restaurants and safari tour providers. Green Park Chitwan, Maruni Sanctuary Lodge and Hotel Jungle Crown are among the standout options worth considering.

Meghauli, just 24mi (40km) to the west of Sauraha, is home to a handful of premium retreats, including Barahi Jungle Lodge and Meghauli Serai – both of which have an on-site restaurant and spa, as well as offering a range of wildlife experiences, including Jeep, boat and walking safaris with experienced park rangers. 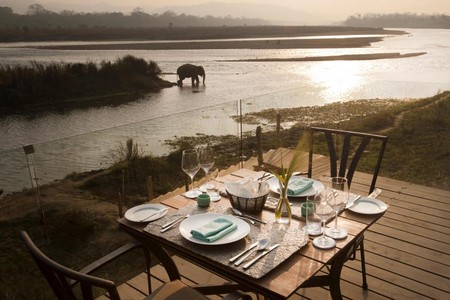 An elephant walks across a shallow lake in Chitwan National Park, Nepal | Courtesy of Meghauli Serai / Booking.com
Give us feedback