A Guide to White Water Rafting in Nepal 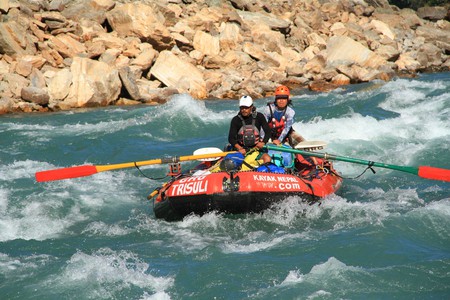 Rafting on the Karnali River | Courtesy of GRG's Adventure Kayaking

Nepal is well-known for its amazing mountains and treks, but those-in-the-know also rate it as one of the world’s best destinations for white water rafting. The rivers are long and clean, they’re surrounded by amazing mountain, hill and jungle landscapes, the guides are friendly and highly skilled and costs are low. Here’s all you need to know about white water rafting in Nepal.

One-day trips from Kathmandu and Pokhara

Kathmandu and Pokhara are the two cities in which most travellers base themselves and single-day white water rafting trips are possible from both places. If visitors are short on time, looking for a quick thrill or have never tried rafting before, a day trip is the best choice. Lunch, along with transportation, is provided (good old dal bhat) at a river camp afterwards. 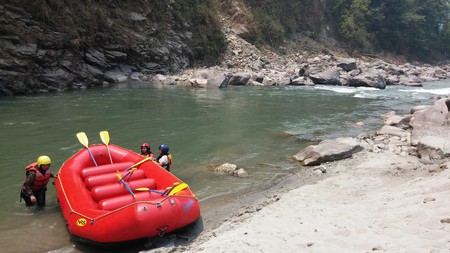 The put-in point for rafting on the Trisuli River is about a three to four hours’ drive from Kathmandu. It’s a nice bouncy river, but the rapids aren’t too big, making this an ideal river for beginners. The waters are usually quite warm, and from the river, pretty terraced farmland, local villages and enormously high hills can be seen. As this river also flows between Kathmandu and Pokhara (the highway runs parallel to it for some of the way) and river trip ends near the turn-off to Chitwan, it’s possible to arrange an onward transfer after the rafting fun, rather than returning to Kathmandu.

The Bhote Kosi River (meaning Tibetan river) is a little closer to Kathmandu, at two to three hours to the north-east. The Bhote Kosi used to have a longer raftable stretch, but due to a major landslide in 2014, only a shorter section remains navigable. Still, there’s enough for plenty of fun for a couple of hours and the water here is cool and refreshing – particularly good for the hotter months. There are nice river camps along the way here to stay for the night if you wish (although be warned that they get busy – and noisy – with partying Kathmandu students on the weekends).

From Pokhara, rafting the Upper Seti is the best single-day option. At 90 minutes, trips on the Seti are a little shorter than the options from Kathmandu, but it’s much more accessible, at only a 30-minute drive away. It’s also chock-full of class three and four rapids and comes with glorious views of the Annapurna. Short and sweet.

With more time in Nepal, multi-day trips that head deep into the wilderness can be taken, allowing rafters to see the variety of the Nepali landscape and spend some time camping on white-sand river beaches. Everyone gets a private tent (or can sleep under the stars) and the guides do a great job cooking tasty and healthy meals on campfires. 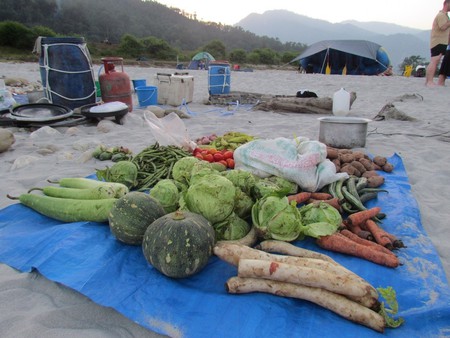 The Kali Gandaki River is accessible from Pokhara. This river flows down through the Kali Gandaki Gorge, which is the deepest gorge in the world, at 5,571 metres at one point. Imagine the views bobbing through that! Kali Gandaki trips generally last three days, so they are another good option for a shorter trip.

The Sun Kosi, or ‘river of gold’, is a couple of hours’ drive from Kathmandu and ends close to the Indian border, in south-eastern Nepal. The eight-day trip is a classic and a favourite among rafters and kayakers alike. The beaches and river sparkle with the golden sand, the camping beaches are clean and remote, the high hill scenery gives way to the flat plains of the Terai and there are plenty of mid- and big-sized rapids for plenty of fun.

Two of Nepal’s best activities – trekking and rafting – come together on the Tamur River trip. On this 12-day expedition, the first three days are spent trekking in the mountains, reaching altitudes of over 3,000 metres and having the kayaks and rafts carried by porters! The rapids on this river are quite challenging, so they are best suited for people with some white water experience. 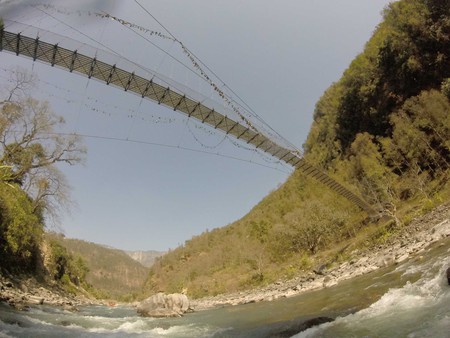 The Karnali River runs through Western Nepal, an extremely remote and under-developed part of the country. Ten-day river expeditions are one of the few ways to see the region and pass along clear blue waters, jungles, amazing rock formations and end near Bardia National Park. The Karnali River is threatened by a hydropower project, however, so it would be a good idea to take this trip sooner rather than later.

Where white water rafts can go, so can kayaks. Although visitors can learn to kayak in Nepal and go on kayak-only trips, it’s also possible to combine the two activities. This is a particularly good idea for beginner or intermediate kayakers who want to improve their skills, but who may not be confident kayaking all day, every day on a longer trip. It’s also a good idea for groups of friends or couples travelling together, who may have different skills and interests.

Nepali companies don’t necessarily have to abide by the same standards as tour companies in some other countries, but many reputable ones do. Look out for companies that have good, recent reviews and who have their credentials clearly displayed on their office walls – and are able to talk to potential clients about them. A particular point to ask about is their ratio of safety kayakers to clients. These guys are the ones who keep clients safe should they fall in the water and some companies may try to cut costs by limiting the number of safety kayakers. Reputable, well-established companies for longer trips include Ultimate Descents, GRG’s Adventure Kayaking and Airborne Nepal. 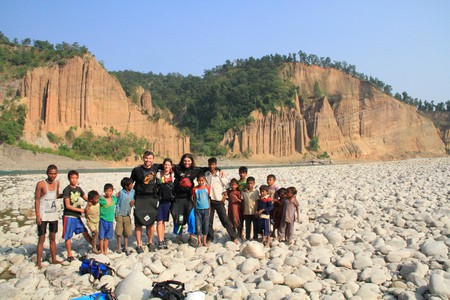 Another consideration when choosing a trip and a company is the type of accommodation provided. When heading off on a multi-day trip, it’s necessary to camp on beaches, as this is the only option. However, for overnight trips, some companies can arrange accommodation in a basic or more comfortable river camp. Sukute Beach and Rafting Star on the Bhote Kosi River have particularly good camps, with permanent tents and beautifully landscaped gardens. For something a bit more up-market, request to stay at the Riverside Springs Resort on the Trisuli River, halfway between Kathmandu and Pokhara.

The peak tourism seasons in Nepal are spring (March-May) and autumn (September-November). At these times, the weather is at its best, being hot but not uncomfortably so, and there’s usually minimal or no rain.

Water levels are an important factor for white water rafting. In the spring, water levels can be quite low, as at this time, it has been the longest since the heavy rains of monsoon. On some rivers (such as the Bhote Kosi) the flow can be a bit low, meaning it’s common to get stuck on the rocks! This isn’t usually a major problem but can be an inconvenience and slow down the fun. The wind on some rivers (such as the Karnali) can be an annoyance in this season, too.

In autumn, after the monsoon, water levels are at their highest. This can make for some exciting rapids – sometimes a bit too exciting earlier in the season (around September)! By late November, the nights are getting quite cold for camping on beaches, but in other respects, this is the best time to go.

White water rafting is very good value in Nepal. While a 10-day trip in the USA might cost several thousand dollars, a similar trip in Nepal is more in the $800-1,200 range. This includes all food, tent hire, equipment and ground transportation. Day trips cost around $70, including transportation and lunch.

Tip your guides if you’ve had a good experience. Guides in Nepal aren’t paid well and appreciate the extra cash. Be sure to tip the guides directly (or hand it to a head guide on a longer trip) rather than give it to the company, as it is not always passed on to the guides in the latter case. Approximately 10% of the total trip cost is an appropriate amount.