18 Festivals Worth Travelling to Nepal For 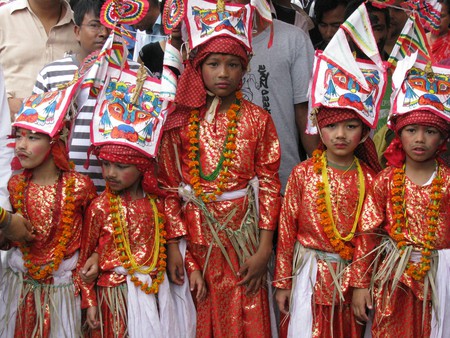 Nepal is a predominantly Hindu nation with a significant Buddhist minority, meaning there are lots of interesting and colourful religious and cultural festivals happening throughout the year. In addition to these, there are also a number of artistic and outdoor adventure festivals that have become a fixture of Nepali (especially Kathmandu) life. Here are the top festivals to keep on your radar when planning a trip to Nepal. 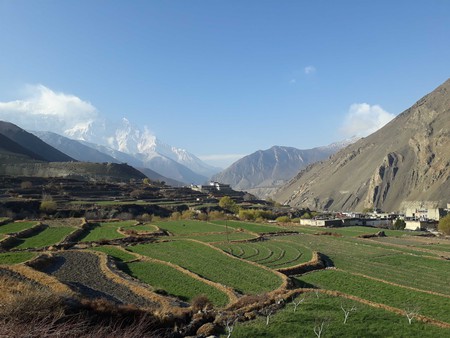 This annual film festival has been running since 2000 and is always held in Kathmandu in early December. It showcases Nepali and foreign filmmakers whose work focuses on the natural or cultural aspects of mountain communities. It runs for several days, so if you’re in the capital during the festival, don’t miss out on catching a film or two at KIMFF. 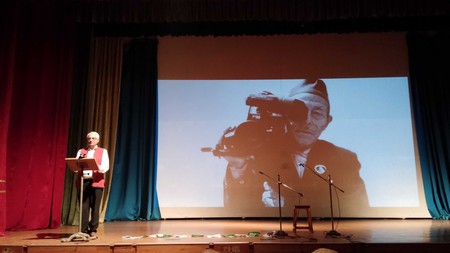 Film Southasia is held every two years in October/November (the next will be in 2019). It showcases documentary films from the countries of South Asia, such as Nepal, India, Bangladesh, Pakistan, Afghanistan, Bhutan, Myanmar and the Maldives. 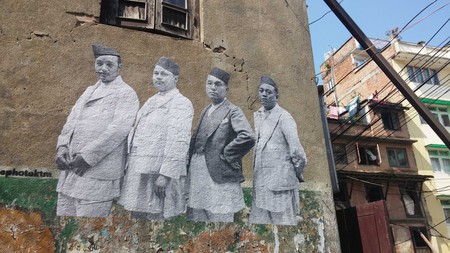 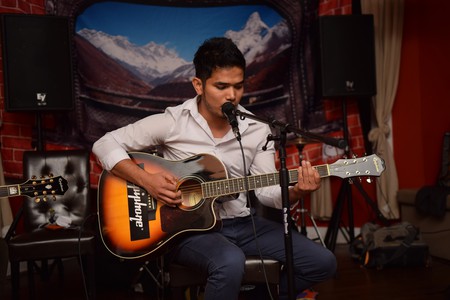 Jazzmandu is (you guessed it) a festival of jazz music, featuring both Nepali and international musicians. It’s on every year in October/November at venues around the city and in the Kathmandu Valley. Performances are ticketed. 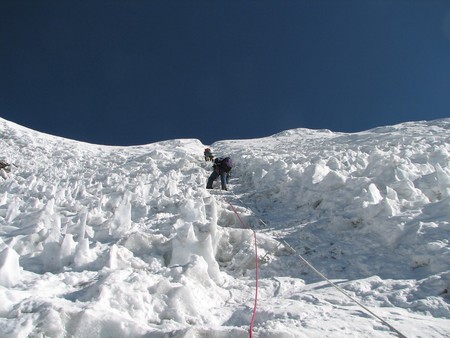 The Himalayan Outdoor Festival is held at the end of winter (around February) and brings together mountain climbers, trail runners, mountain bikers and Kathmandu businesses catering to these active pursuits. There is also a slackline competition, an ice-axe pull-up, an acrobatic paragliding show, flying fox, zip lines, rappelling, a mud run and an auto expo. The Himalayan Outdoor Festival is held in Hattiban, in the hills on the southern edge of the Kathmandu Valley.

Other annual outdoor and adventure festivals include Himalayan Rush near Pokhara and the Godawari Running Festival. 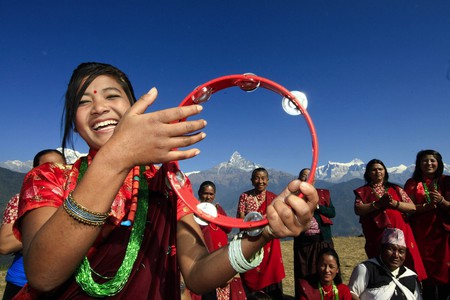 Lhosar is celebrated by Nepali ethnic groups who trace their history to Tibet, particularly the Gurung, Tamang and Sherpa people. It often coincides with the Chinese New Year, as is follows the lunar calendar. Each community celebrates the festival slightly differently, but there are usually large gatherings and celebrations where traditional dress is worn. 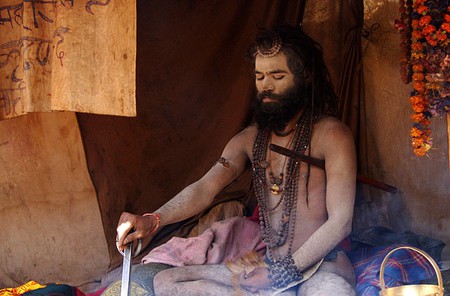 The Shivaratri Festival honours the Hindu Lord Shiva and is normally held in February/March. Devout Hindus worship at Shiva temples, but around the country (especially in predominantly Hindu areas) an ‘air’ of festivity can be found, as it’s the one day of the year when cannabis is not illegal in Nepal (due to religious reasons). Thousands of sadhus (Hindu holy men) converge at the Pashupatinath Temple in Kathmandu to celebrate Shivaratri. 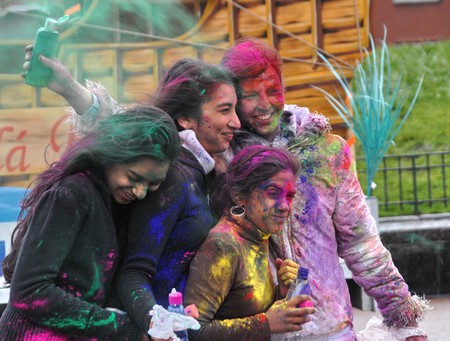 Holi welcomes the end of winter and the start of the warmer months and is normally held in March. It’s famous for its riotous explosion of colour, but in Nepal, it is also commonly celebrated with water fights. If you plan on leaving your hotel room on this day, leave your valuables behind and wear clothes that you don’t mind getting ruined! Holi is celebrated on the Terai (the Nepali plains) a day earlier than it is in the hills. 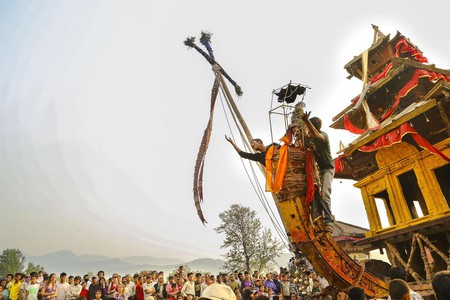 Bisket Jatra welcomes the Nepali New Year (Nepal follows a different calendar than the west – it’s currently 2074 VS). This festival is particularly exciting in Bhaktapur, an old city within the Kathmandu Valley. Giant chariots are pulled through the streets and ridden on and culminate in a chariot battle. To witness this festival, book an accommodation in Bhakatapur and stay for a couple of days. 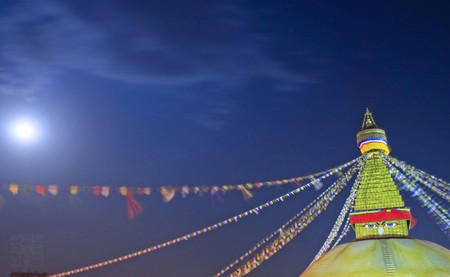 Buddha Jayanti celebrates Buddha’s birthday, and although it’s primarily celebrated by Buddhists, some Hindus also observe this holiday. Particularly good places to spend this festival at are at Lumbini, Buddha’s birthplace and at Boudhanath, the area of Kathmandu where the holiest Tibetan Buddhist stupa outside of Tibet is located. It’s usually in April/May. 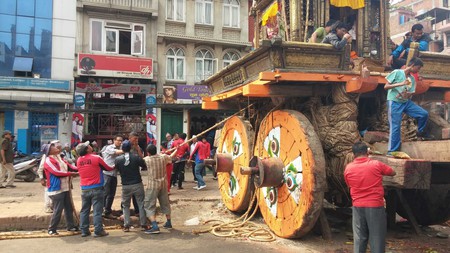 Another fabulous chariot festival, this one is held in Patan around April/May. A giant chariot is built on Pulchowk Road in Patan, and when it’s complete, a statue of the god Machhendranath is placed inside. The chariot is pulled around the streets of Patan over a couple of weeks. On one of the days, the Kumari of Patan (Living Goddess) is seated inside and pulled around the streets. It’s Nepal’s longest and largest festival, so if you’re travelling to Nepal in April/May, head over to Patan and see if the chariot is making its rounds. 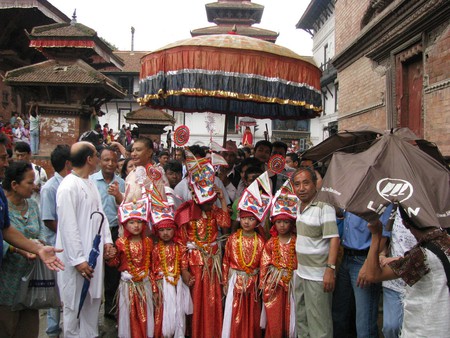 Gai Jatra means ‘cow festival’. Every family who has lost someone in the previous year is meant to lead a decorated cow through the city, or a boy dressed as a cow. ‘Dressing like a cow’ is interpreted somewhat loosely, as the costumes that boys wear are colourful and elaborate. It’s held sometime in August.

Teej is celebrated by Nepali women in honour of their husbands and the relationships they have with them. Some women fast during the festival, in an attempt to bring good luck to their husbands. Women typically dress in red and enjoy singing and dancing together at temples on these days, usually in September. Foreign women will usually be encouraged to participate in the festivities if they find a group of Nepali women celebrating Teej. 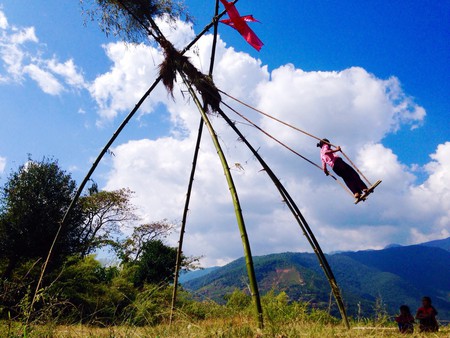 Dashain is the biggest festival of the year for Nepali Hindus, as it celebrates the victory of good over evil. In the countryside, large bamboo swings are erected for kids to play on and it’s common to see sacrificial goats being led around on leads (or transported atop buses!). It’s a very family-oriented time, so visitors might not find it that easy to experience a true Nepali Dashain unless they spend time with a local family. If they don’t happen to know any, staying at a homestay can be a good way to experience Dashain with locals. It’s usually held in October, over about 10 days, but can sometimes be as early as September or as late as November. 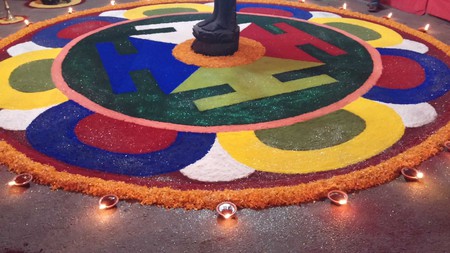 Tihar follows shortly after Dashain. It’s the festival that’s better known as Diwali, or Deepawali, in India. The festival lasts several days and a different creature or attribute is worshipped on each day. The most important day is Lakshmi Puja when the goddess Lakshmi is invited into peoples’ homes and businesses with the lighting of butter lamps and the laying of colourful rangoli patterns. Towns and cities throughout the country are beautifully lit up during Tihar. 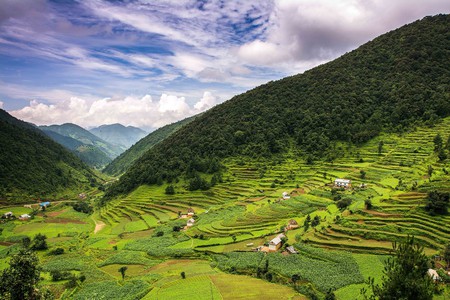 Rice is more than an essential staple food in Nepal – it is an inherent part of the landscape and built into the culture in a multitude of ways. Celebrations are held during the planting and harvesting of rice. Ropain celebrates the planting of rice, at the beginning of the monsoon season in June. There are opportunities for tourists to get involved (and a bit muddy!) as some Kathmandu tour operators offer day trip packages to the farmland surrounding the city. Plenty of rice beer is included! 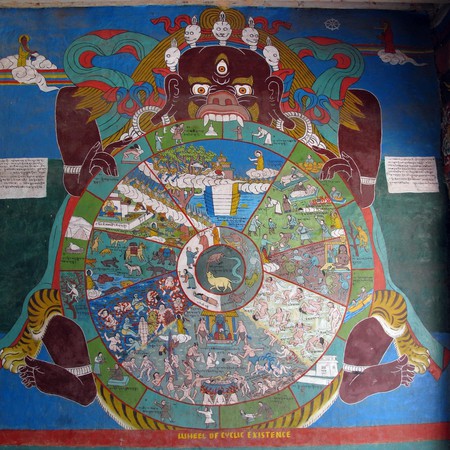 This festival, held in the remote town of Lo Manthang in the Mustang region, is more difficult to witness than the others on this list, but efforts to attend the Tiji Festival will be greatly rewarded. During the three-day festival, monks from the Choedhe Monastery perform ritual dances dressed in colourful and elaborate costumes, in commemoration of a man who saved Mustang from destruction. It’s held sometime in May. As Upper Mustang (where Lo Manthang is located) can only be visited with a guide and after purchasing a special permit, travellers are advised to book a special Tiji tour with a travel company in order to experience this festival (don’t confuse Tiji with Teej!). 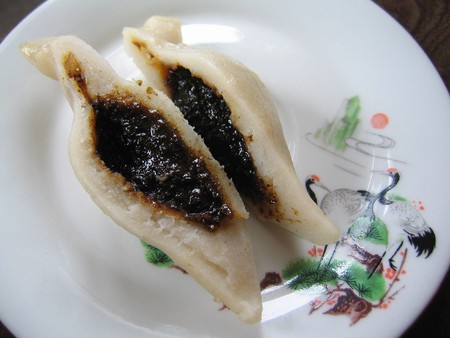 Yomari is a sweet snack prepared by members of Nepal’s Newar ethnic group. In December, an entire festival, Yomari Punhi, is held in their honour! Yomari Punhi celebrates the end of the rice harvest. You can find yomari on sale in Newari parts of Kathmandu at this time (Patan in particular). Travellers interested in Nepali food shouldn’t miss this one.