The Origins Of The Thingyan Festival, Burma 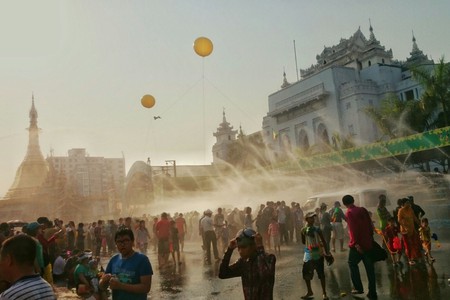 Burma’s answer to Thailand’s Songkran, and Cambodia’s Chaul Chnam Thmey, is Thingyan. It’s the annual water festival, which celebrates the coming of the new year with a nationwide display of performances, religious ceremonies and, bucket loads of water. It’s a sight to see and not to be missed if you are visiting the country in April.

What is the Thingyan Festival?

The Thingyan Festival runs, roughly, from 13th to 16th April each year; and signifies the end of the hot, dry season, as well as the chance to take stock, reflect and wash away the previous year’s misgivings or bad luck. It’s also a time of national celebration with state and sponsor-funded gatherings including water soaking stations, music and more. 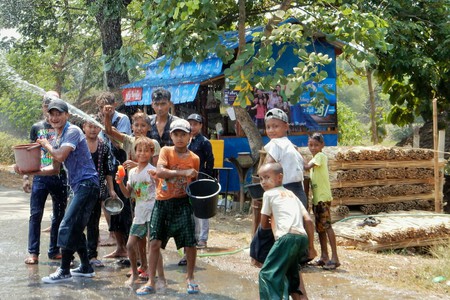 The eve of the start of Thingyan, or a-kyo nei, marks the beginning of celebrations, with Buddhists expected to adhere to what’s called the Eight Precepts. This includes three additional clauses to the standard Five Precepts, which make up the basic code that Buddhists live by (think along the lines of the 10 commandments). Offerings are made to the monks as well as to shrines and images of Buddha, and it’s a time to be thankful for what the year has provided. It’s at night that things really kick off in earnest, when the festival vibe takes hold with music, dancing, and singing filling neighborhoods across the country, which last for the following few days.

Huge bamboo platforms, or pandals, are erected in the run up to Thingyan, with rows of brightly colored hose pipes dangling downwards. Often sponsored by brands, these platforms are the focus of the celebrations in each area, from quiet country roads to the centre of the biggest cities such as Yangon and Mandalay. It’s not until New Year’s Day, the fourth day of celebrations, that things start to settle down again as people take time to visit family and prepare themselves for the coming year. It’s usually safe to go outside if you’re trying to avoid yet another soaking, as the water throwing stops (in theory), and people focus on acts of kindness such as releasing captive birds and fish, while special feasts are held for monks.

The festival is celebrated in slightly different ways in states around the country. For example, in the Shan state to the east of Burma, it is called Sangkyan, while in Rakhine State to the west, the people observe three other traditional ceremonies, and in Mon state to the southeast, a special dish made of dried snakehead fish, onions, beeswax, and green mangoes is served up to the many. The local nuances reflect the differences between the states in Burma – each has an identity of its own. 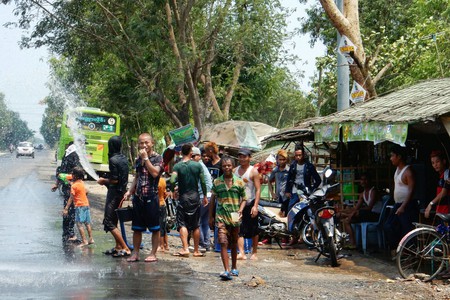 While many people still take part in the religious ceremonies, there’s no denying that the festival has evolved into a giant party. What started as a traditional sprinkle of water from one person to another symbolising cleansing has developed into a massive water fight, albeit a good natured and fabulously fun one. There aren’t many places in the world where you will willingly see fully uniformed police officers soaked to the skin, standing under gushing hose pipes, just keeping an eye on things. This, in a nutshell, says everything you need to know about Thingyan: a joyous time filled with gratitude and lively antics.

Don’t miss the cultural shows (if you’re in Yangon, head to the Sule Pagoda, where you’ll find the city’s biggest party, officially operated water canons included) with traditional dancing and singing, but keep an eye out for wily locals with water pistols and ice cold buckets just waiting to pounce on unsuspecting tourists. It truly is a brilliant experience. 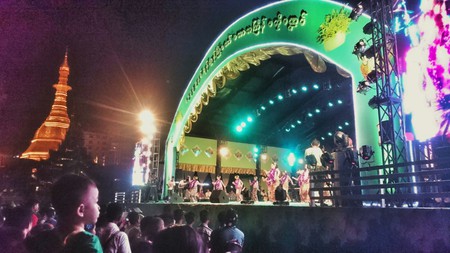 Tips For Making The Most Of Thingyan

As Thingyan is at the end of the dry season, it’s unsurprising that April is the hottest month of the year in Burma; with daily highs heading towards the 40°C mark, alongside extreme heat and humidity to boot. While some people are put off visiting at this time because of the intense heat, there are big bonuses to going just outside of the peak season if you like it hot: sites can be quieter, transport easier to book, and accommodation (which is limited in terms of capacity in certain areas) more readily available. On top of this, if your trip coincides with the Thingyan Festival, you’re in for a real treat – you’d be crazy to miss it if you are planning to go in April.

There are however, a few practicalities to consider as the country basically goes on hold for three days. While April is good overall for finding accommodation, the Thingyan Festival is a national holiday, so places get booked up quickly during this time – book your stay in advance to guarantee a hotel, guesthouse or hostel where you want.

As with accommodation, much of the country is on the move during Thingyan, so book your travel in advance whether it’s by bus, train or car. For the same reason, don’t expect the cafes, restaurants or shops to be open – plan for street eats and entrepreneurial stalls surreptitiously selling overpriced, lukewarm cans of beer.

Do be prepared to chat to the locals. There’s a jovial, friendly atmosphere and, as it is one of the most welcoming countries in the world, people will want to talk to you, not to mention get you nice and wet. Which leads nicely on to the final point: be prepared to get very, very wet! Don’t wear anything expensive as the water isn’t necessarily clean, and remember to dress with consideration if you’re going to be soaked to the skin; you’ll find plenty of folk selling plastic wallets for your phone so you can keep them dry while still being able to snap away. 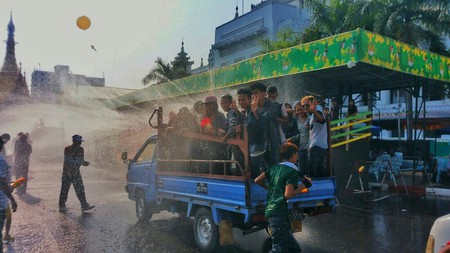