The Most Spectacular Places to Cycle in Myanmar 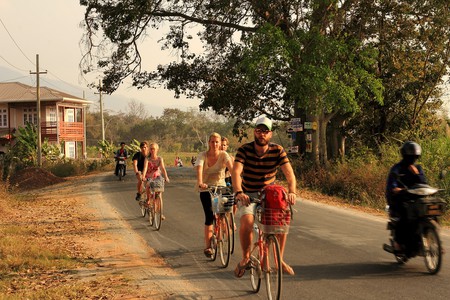 Exploring cities on foot can be exhausting, taxis expensive, and public transportation confusing… There is one device, however, that allows visitors to explore with ease. Grab your helmets as we reveal the most spectacular places to cycle in Myanmar.

Island monasteries, Buddha-filled caves, stunning viewpoints: there is so much to see and do around Inle Lake. You’d certainly miss out on a top sight or two if you didn’t have a set of wheels to get around on. Many shops renting out bicycles can be found near the Mingalar Market. Make this the starting point and first explore the vibrant and thriving market before heading off to the Pindaya Caves. These are about a 30-minute cycle from the market, and the ride back is much easier than the way there, so try not to get discouraged when your legs start burning.

From the caves, head back towards the market to explore the exterior of Inle Lake, heading to the hot springs, stopping along the way at viewpoints, grabbing a bite to eat at the Tofu Palace, visiting the Khaung Daing village for a unique experience, and more. Boats can be hired cheaply to take you and your bicycle across the lake, if you don’t want to cycle around the whole perimeter. Be warned, however, that the more people and bicycles you fit onto a boat, the more likely it is to sink… do not find this out the hard way! 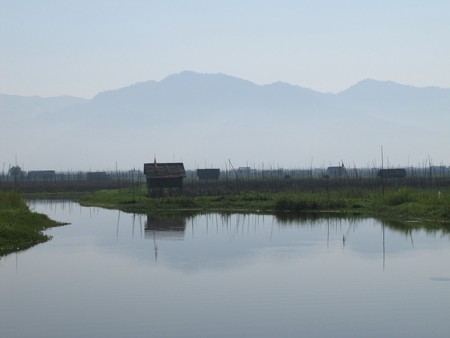 One of the best ways to explore the architectural wonders of Bagan is by bicycle. Though electric bikes (e-bikes) are the main form of transportation, ambitious cyclists can take to the dirt roads via bicycle. Gilded pagodas and towering stupas are scattered throughout the Bagan Archeological Zone, and cyclists can explore each one as they please on their own set of wheels.

Start in New Bagan and head to the Bagan House Lacquerware Workshop to see how this amazing art form is made. From there, head towards Old Bagan, stopping at the top temples and pagodas along the way, including Dhammayangyi, Shwe San Daw Pagoda, Thatbyinyu, Ananda Temple, and finally Gubyaukgyi, before arriving at the Mani-Sithu Market. There are plenty of things to see and do along the way from New Bagan to this market, so stock up on water and stop and go as you please. 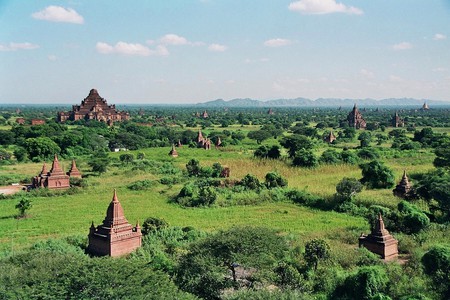 Kalaw is simply a stop-off point to many visitors, on the trek from the city to Inle Lake. If you have time on your hands, however, a day spent cycling around this cool town is worth it. With mountainous terrain hugging Kalaw on all sides, cyclists will certainly need to concentrate on where they are going! Situated on the Shan Plateau, Kalaw can be navigated on foot although it is much easier and faster to simply rent a bicycle. Cyclists should be sure to stop off at the city’s most noteworthy feature: the Aung Chan Tha Zedi. Known as one of the most stunning of stupas in the entire country, the religious structure is made up of mosaic tiles that are especially attractive to photographers. 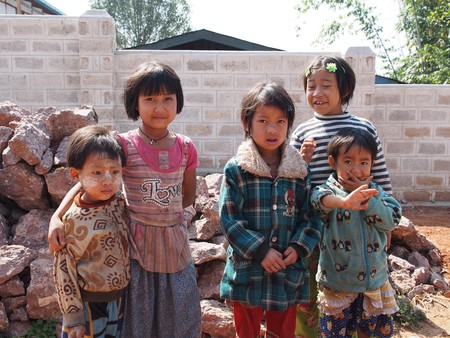 Village kids we saw on our trek outside Kalaw. Courtesy of Brian Holsclaw/Flickr

The ancient capital of Mandalay is best explored on two wheels. As the second largest city in the country, one would have a hard time seeing the city on foot, and the cost of getting a taxi around would add up. Mandalay is also one of the easiest cities to cycle in, as it’s mostly quite flat. There are many of top sights that must be included on a cycling route, including the Mahamuni Paya, Jade Market, and any of the gold leaf making factories around town.

A good starting point for cycling is the road closest to the Ayeyerwaddy River, down to the Shwe In Monastery, stopping by the Jade Market. From there, cycle even further down to see where Buddha images are made, adjacent to the Maha Myat Muni Pagoda. Cycle back up towards Mandalay Hill and end the day with an amazing sunset. This isn’t easy to get up by bike, so get a taxi at the bottom and save some kyat by cycling back down the mountain, after sunset. Be sure to check the brakes beforehand, as some bike shops don’t do a good job of this before renting them out. 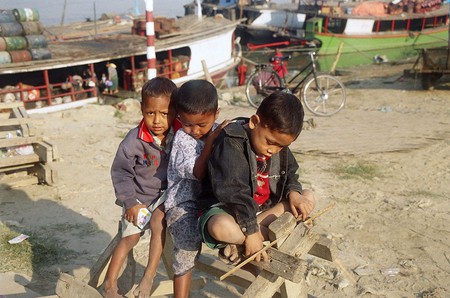 Just across the Ayeyerwaddy River from Mandalay is Mingun. This ancient city costs 3,000 kyat (US$2) to enter and has a bit of a touristy vibe, but try to look past this. The riverside village is home to three top sights: the Mingun Paya, the Hsinbyume Paya, and the Mingun Bell. The bell is one of the world’s largest and heaviest; so park your bike and venture inside to get a feel for its massive size. The Mingun Paya, or pagoda, is a stunning structure from the outside. The Hsinbyume Paya is certainly one of the most spectacular of pagodas in all of Myanmar, with an interior and exterior so white that visitors will almost not want to step inside and make it dirty!

Mingun is accessible by car, but there is also a ferry that takes bicycles that leaves from Mandalay at the Mingun Pier. 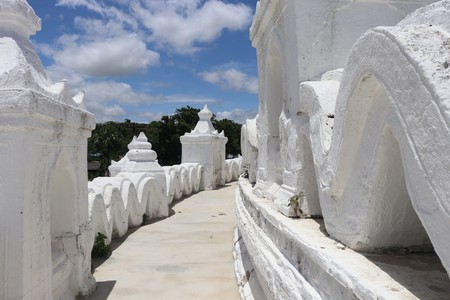