The Best Beaches in Myanmar 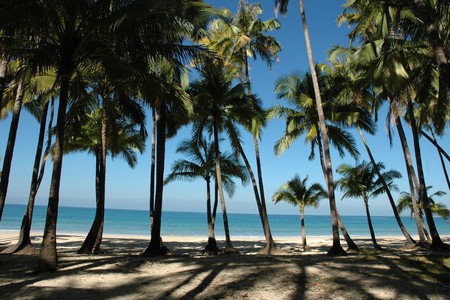 Although three of Myanmar’s most popular beaches run along its west coast facing the Bay of Bengal, they vary greatly in what they offer, from price and quality of lodging to types of excursions and even the color of sand. Which Myanmar beach best fits your travel style and budget?

Ngapali Beach is well known for its idyllic turquoise water and several miles of serene, white sandy beaches framed by palm tree perfection. It’s where to go to get away from it all, as it’s not the easiest or the cheapest of beaches to venture to. Then again, most places worth experiencing in Myanmar aren’t. 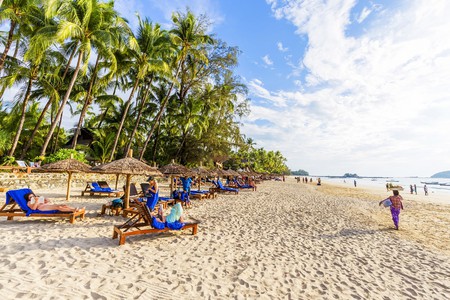 Ngapali boasts some of Myanmar’s freshest seafood and the purest of laid-back vibes. With many extravagant accommodation choices along its pristine shore, Ngapali Beach sits on the higher end of the price spectrum.

Since the area has developed into a popular site for tourism over the years, there are plenty of activities to do if you don’t just want to lounge around. By all means, though, plan to lounge a lot. Scuba diving, snorkelling, sea kayaking, or a half-day trip to a nearby fishing village can all be arranged.

Due to ongoing civil unrest in the region, Ngapali may be inaccessible by car or bus. Taking a one hour flight from Yangon to Thandwe (approximately four miles away from the beach) is advised. Daily flights are available during the peak season. 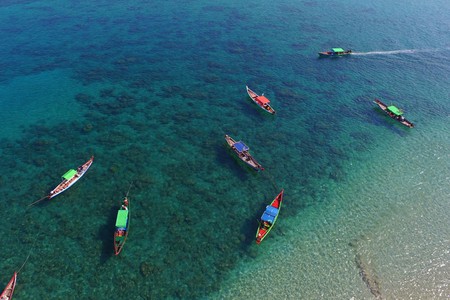 Ngwe Saung Beach is ideal for a weekend getaway that isn’t too expensive, has a nice mix of locals and foreigners, and caters to backpackers as well as vacationers looking for luxury. It also flaunts just as gorgeous of a coastline as Ngapali, but is much closer to Yangon. A five to six hour bus ride (approximately $25 USD roundtrip) is the most common mode of transport.

Relaxation isn’t hard to come by at Ngwe Saung. It isn’t crammed with beachside bustle (yet). Wander along its nearly 10 miles of whitish, packed sand. Dig for sand dollars. Walk to Lover’s Island by foot at low tide. Buy a coconut from a local vendor. Visit the village. Pose by Kyauk Maumghnama Pagoda. There’s something for everyone. 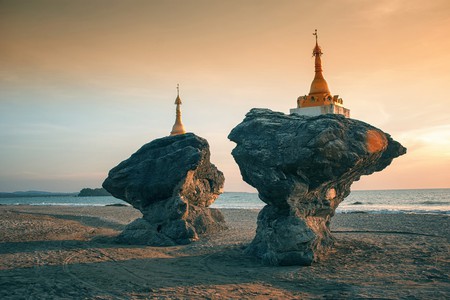 For a more adventurous take on staying at a fancy hotel, camp at Ngwe Saung Yacht Club (starting at $45 USD a night). Tents come with mattresses, linens, lights and even a power sockets. Other amenities include a continental breakfast buffet, full use of the lavish resort and pool, and access to clean showers and restrooms.

Ngwe Saung Beach will likely continue to see a rise in tourism as it becomes more affordable to a growing middle class in Myanmar, and remains on the radar for travelers seeking a cheaper Ngapali. 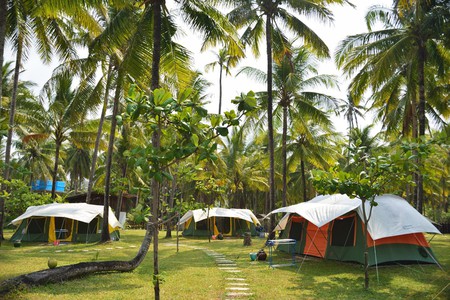 Chaung Tha Beach isn’t necessarily recognized as the most beautiful patch of sand in Myanmar, but it still attracts the masses with its goldenness. Chaung Tha is about the same distance from Yangon as Ngwe Saung, and it’s a total catch for shoestring budgeters. Buses run from Yangon to Chaung Tha for approximately $20 USD there and back.

Chaung Tha definitely sees the most action of Myanmar’s top beaches. Its shoreline is packed with venues varying in price from low to mid range. Holidays and weekends see a huge influx of local tourists with only a smattering of foreigners.

Take the opportunity to engage with people from Myanmar. Rent an inflatable raft or tube and float the day away. Stop by any number of beer stations, teashops, restaurants and souvenir stands. Explore nearby islands or do a little snorkeling. But, again, mostly interact with locals.

Quieter, more remote stretches of beach are just a bike ride away to the north. Try overnighting at an inexpensive hotel at Chaung Tha, and then ride to peaceful isolation during the day if crowds are too much. 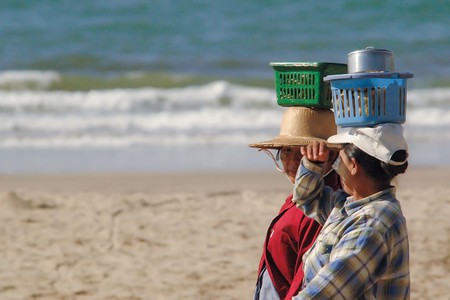 What to Know Before You Go

The best time to enjoy Myanmar’s beaches is from December to April. Most beach resorts in close during the rainy season between May and October. A few stay open, so it’s best to check before going. Transport is also harder to come by in the off-season.

One other even more secluded area known to have strikingly beautiful beaches in Myanmar should be on your wish list. The numerous sand-rimmed islands of the Merigu Archipelago remain largely unexplored, offering a truly unspoiled escape for voyagers hoping to get off the grid.