Judaism In Myanmar Is An Unlikely Pluralism 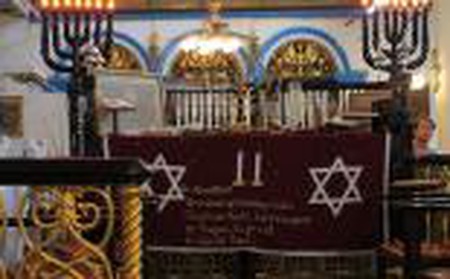 Multiculturalism is all too often promulgated from the pulpits of the Liberal West. Culture Trip looks at the small Jewish community in Yangon, the nation’s largest city, focusing on their history and political influence in Myanmar. 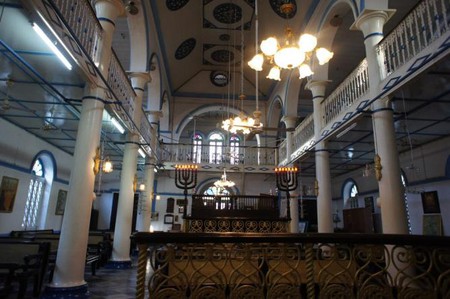 Approximately eight Jewish families continue to live in Yangon (formerly called Rangoon), the country’s largest city. As no official figures exist, different sources suggest this has dwindled from an original population from 4000 to 1,500. Riding the trade routes of British Empire in the 19th century, this small community originally hail from Baghdad, via India. Trading connections earned them considerable wealth and prestige in colonial Rangoon society. Judah Ezekiel Street was named in honour of a local Jewish person, and one family donated a cast iron bandstand to the town, still standing in Bandoola Square

Musmeah Yeshua, the country’s only synagogue, remains as testament to the once celebrated prominence the Baghdadi Jews held in the city. Now, the quorum of ten people needed for prayers often goes unfulfilled. At times, ex-patriots working for the Israeli embassy and a growing number of tourists exploring the city’s culture trail supplement the numbers. However, they cannot contribute to the collective memory of the building that has diminished to a select few minds. Among them is the son of the synagogue’s trustee and keeper, Sammy Samuels. Although leaving to study in New York, Samuels has re-asserted the community’s continued existence through online articles, and has archived its particular history. He recollects that on days waiting for the necessary congregation of ten to arrive, his father Moses would hang a sign on the door stating: ‘A tree may be alone in a field; a man may be alone in the world; but a Jew is never alone on his Holy Days’. 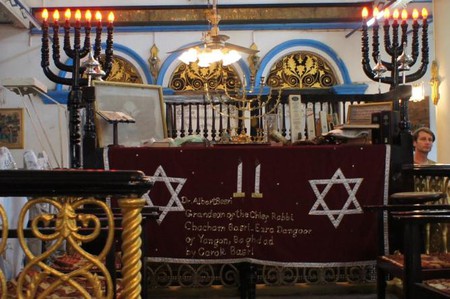 This old adage may have been what has seen these families through the brutal Japanese invasion in 1941, and the longest standing Military Junta which took power in 1962. Many others had fled to America and Israel. However, Moses and Sammy are hopeful that the community may be revived as Myanmar shows signs of change, and ending its isolation from the world. With Democratic opposition leader, Aung San Suu Kyi, sitting in the lower parliament after 21 years of under house arrest, and a recent visit from Hillary Clinton lifting some of the trade and aid barriers set on the country by the USA, the government is carefully managing a unique political transition. No doubt, it aspires to join the booming economies of their Eastern and Western borders – but there is a long way to go. It will necessarily involve some relinquishing of authority by the state, allowing domestic and foreign capitalists to ascend to power. The extremely heterogeneous population fell to ‘slow-genocide’ under the disastrous nation building regime. Any current effort towards a peaceful prosperity demands that this shift away from possible ethnic divisions, as has happened in the past. The Jewish community of Burma offers an unlikely resource that could be used to imagine a more plural future, whilst retaining its own local history.

Set apart from the abhorrent anti-Semitism of 20th century Europe, and Islam-phobic politics of post 9/11, this context requires a different vocabulary of multiculturalism. Migrant communities are not mainly the vectors along which oppression has been structured, but their inclusion in a new era could help break up the ethnic politics that have obstructed change for so long, as well as re-join Yangon with the global economy. The small Jewish communities provide a positive continuity with the past, and are eager to revive the connected, liberated, and wealthy aspects of Myanmar that they travelled to become part of and helped create.

Watch a short video on the Jewish Community in Burma below: