The final capital of the Burmese Kingdom in the late 19th century, today Mandalay is a bustling, modern city ringed with ancient monuments. The ‘spicy garlic smells’ of Kipling’s famous poem are never far away. While the city’s culinary focus is very much centred on street food and old-fashioned teahouses, the emergence of tourism in the past few years has significantly diversified the gastronomy. Here are 10 great restaurants to kick off your culinary journey across Burma. 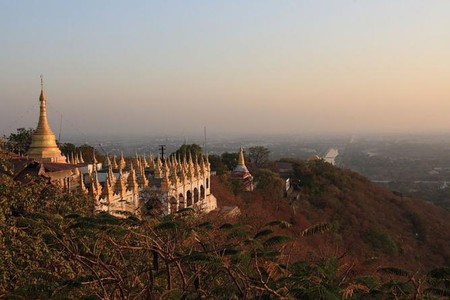 Restaurant, Asian, $$$
Facebook
Email
Twitter
Pinterest
Copy link
Share
Green Elephant is the most luxurious place in Mandalay for a traditional culinary experience. Part of a small chain with three branches throughout the country, it began in a disused Yangon garage with the aim of fusing Burmese food with Western standards of service and cleanliness. Set within an early 20th century colonial villa with a bucolic garden, it’s something of an oasis removed from the dust of the surrounding streets. Authentic Burmese dishes include tealeaf salads, fine curries accompanied by soy paste, and moet-hin-karfish soup. Thai and Chinese menus are also available, and all the food uses vegetables from the restaurant’s own local garden.

Although Mandalay’s Burmese population is largely made up of Bamar people, the city’s proximity to the rural Shan State has contributed immensely to the local cuisine. One of the most popular restaurants in the city, Lashio Lay is also the best place for authentic Shan fare. Freshly cooked dishes are displayed at the till, from which you can select the dishes you wish to try. Delicacies include shan tohu (chickpea-flour tofu fritters), wet tha chin (minced pork in rice) and papaya salad, with an emphasis throughout on sesame, peanut and garlic flavours. 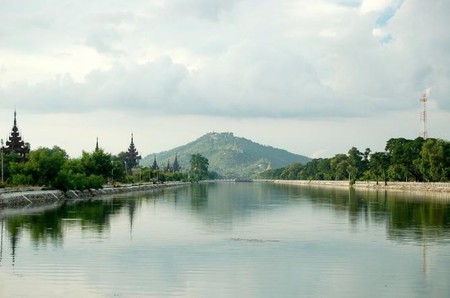 Close to the Mahumuni Temple’s golden Buddha and spectacular pagoda, Aye Myit Tar is a favorite among locals. Set in an unpretentious room covered with photographs of Myanmar, the staff are extraordinarily friendly. The most popular choice here is the Burmese curry, which combines Indian and Chinese flavours in a delicate balance and comes with a smattering of complimentary vegetables, salad and broth. More adventurous diners should try the meeshay, rice noodles cooked in a clay pot with a thick, oily meat sauce.

With southern Chinese immigrants accounting for over a third of the city’s population, it’s no surprise that many of Mandalay’s best eateries specialise in Cantonese and Yunnan food. Super 81 stands out in a crowded field, serving up a huge variety of dishes; there are a dozen variations of steamed duck alone, along with excellent squid and sea bass, all served in generous portions. Its labyrinthine layout only adds to the charm, with a sprawling network of rooms, terraces and roof gardens hidden behind an unassuming shop front.

For much of their history, the countries now known as Myanmar and Thailand were composed of small warring states with constantly shifting boundaries. Lanna, the northern Thai kingdom centered on culinary haven Chiang Mai, was under Burmese control until 1775. There remains a significant Thai minority in Mandalay, and Ko’s Kitchen serves the most elegant Thai food in town. Located just west of the incredible reconstructed Mandalay Palace, it’s housed in a pleasant art deco building and features a glass-walled kitchen that you can watch as you wait. Alongside fine-tuned green and red curries, specialties include fish skewers, yam pla duk foo (catfish salad with mango and cashews) and a larb Llana, an elaborately spiced minced pork salad.

Cafe, Diner, American, $$$
Facebook
Email
Twitter
Pinterest
Copy link
Share
Café City is advertised with kitschy neon signs and decked out with miniature cars and model planes, Café City feels like a classic American diner, right down to the leather booth seating. Peruse the menu, though, and you’ll be surprised. Alongside Western comfort food like steak, pizza and battered fish, they serve prawns grilled in honey, coconut-flavoured fish kebabs and a range of Japanese options. Despite, or perhaps because of, this international focus, Café City is a hit with the local youth, giving it a lively, fashionable ambience.

From 1885 to 1948, Burma’s colonial rulers saw it as a vital connection between India and Singapore. As a major stopping point on the trade route, Mandalay has long been influenced by its northern neighbours, and is today dotted with numerous authentic Indian eateries. Marie Min, located down an alleyway a block to the south of the Palace, is particularly admirable. Everything on the menu is vegetarian, including the breakfast buffet frequented by Western backpackers. Come in the evening for diverse menu of delicious curries, accompanied with dahl, baingan bharta (roasted aubergine sauce) and a range of lassis. 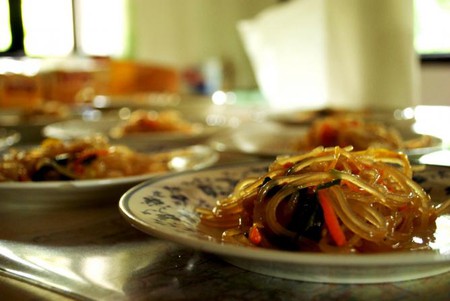 One of the most delightful side effects of Mandalay’s flourishing migrant population has been the emergence of the southern Chinese barbeque. Set around a big outdoor seating area, Yunnan III epitomises this trend while harking back to the traditional teahouse. Curate your dish from a lavish selection of meat, vegetables and noodles then watch as they are freshly grilled. Often filled with groups of local men drinking whisky, smoking cigars and watching football, it’s one of the best places in Mandalay for meeting friendly residents and feeling a sense of community.

Simplicity certainly lives up to its name. Located in Mandalay’s western district, between the bustling jetties of the Ayeyarwady River and the exquisite teak Shwe In Bin Kyaung monastery, Simplicity doesn’t just feel like a house, it is one. The owners, who treat their customers like honorary family members, often join their guests at the table. The wholesome, straightforward local dishes, including shan noodles, dumplings and carrot salads, are entirely organic. Come in the mornings to sit in the tiny front garden, separated from the street by a hedgerow, and breakfast on strong coffee and Chinese cakes. 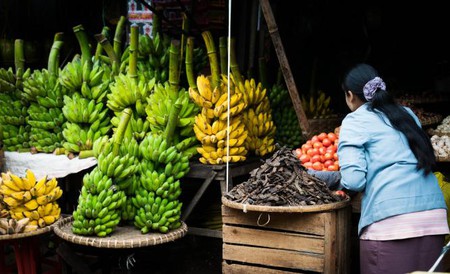 Market, Street Food, $$$
Facebook
Email
Twitter
Pinterest
Copy link
Share
While Mandalay’s cafes and restaurants proffer an array of globe-spanning cuisines and offer a glimpse into local life, the city’s true culinary heart still exists in its street food, often centred around its markets. Zegyo Market is both the largest and oldest in Mandalay. Though now housed in an uninspiring shopping centre, you can browse all manner of delights in the scores of colourful, canopied stalls that surround it. If you don’t feel like sampling chicken gizzards, pig’s stomach or curried lungs, try mohinga,a fish noodle soup that has long been Myanmar’s unofficial national dish. For something a little sweeter, pick up some kauknyintok,steamed bananas wrapped in coconut leaves.
Give us feedback