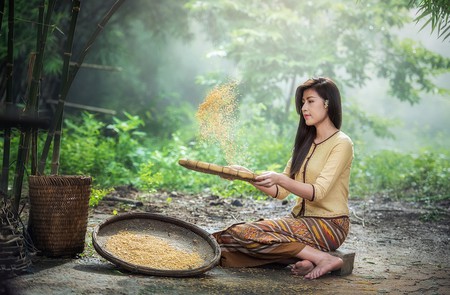 Burma, officially known as Myanmar, is going through great political and social change as it moves towards democracy and opens up to the world. Here are 10 of the best places to eat across the country. 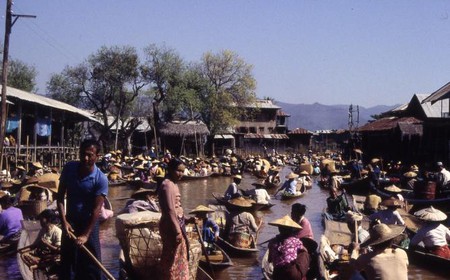 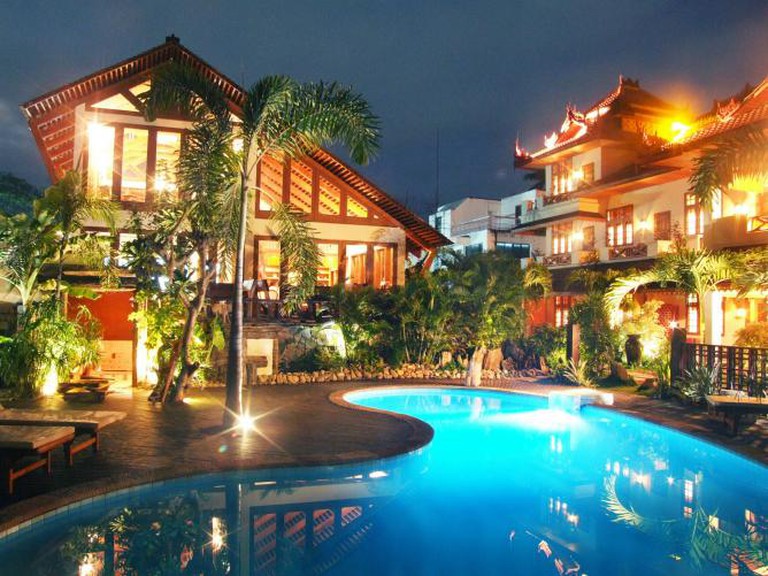 The exterior of the restaurant overlooking the pool | © Spice Garden
Part of the boutique Hotel by the Red Canal, the Spice Garden has a wonderful and luminous ambience. Overlooking the pool, the restaurant is spread over two floors, framed within a teak annex. It is a fine dining restaurant serving Northern and Southern Indian cuisine, with a traditional tandoor to add to the authenticity of their tandoori dishes. The food is also guaranteed to be freshly cooked on the day. Cooking classes led by the resident chefs are offered. If you just want to enjoy the food, there is an outdoor area for al fresco eating, where the relaxing atmosphere can be best soaked up.

Set within a grand 1920s colonial house, Green Elephant is a luxurious dining establishment offering the best in traditional, home-cooked Burmese and Thai fare. Opened in 2002 by Cherie Aung-Khin, and with successful branches in Rangoon and Bagan, Green Elephant is perhaps the most popular chain in Burma. The business grew out of Cherie’s antiques and furniture venture, Elephant House, so it is not a surprise to find the Green Elephant restaurant impeccably and exquisitely decorated. This is authentic, quality Burmese cuisine served with style.

Restaurant, French, European, Fusion, $$$
Facebook
Email
Twitter
Pinterest
Copy link
Share
Overseen by internationally renowned executive French chef Gil Dumoulin, who has learned from Michelin-starred French chefs from the Fouquet’s, the Hotel de Crillon & the Bristol in Paris, Le Planteur Restaurants & Lounge is a real star of the Burmese restaurant scene. It has many awards to its name, including being named one of the Top 200 Fine Dining Restaurants in Asia (Miele Guide 2012/2013). It is considered the best restaurant in Rangoon and the entire country. The cuisine is a fusion of modern French and Indochina-style fine dining, served in the grounds of a beautifully restored 1920s manor on the waterfront of the peaceful Inya Lake. During the dry season, guests dine under the stars in the (miraculously mosquito-free) tropical garden. It is softly lit and surprisingly intimate. During monsoon season, the house serves as an elegant backdrop to a night of old-fashioned romance. Offering a gourmet restaurant with fine-dining cuisine, a bistro with traditional French brasseries dishes, a wine bar with over 32 wines by the glass and high tea in the afternoon, Le Planteur Restaurants & Lounge is a chic and trendy place to be. 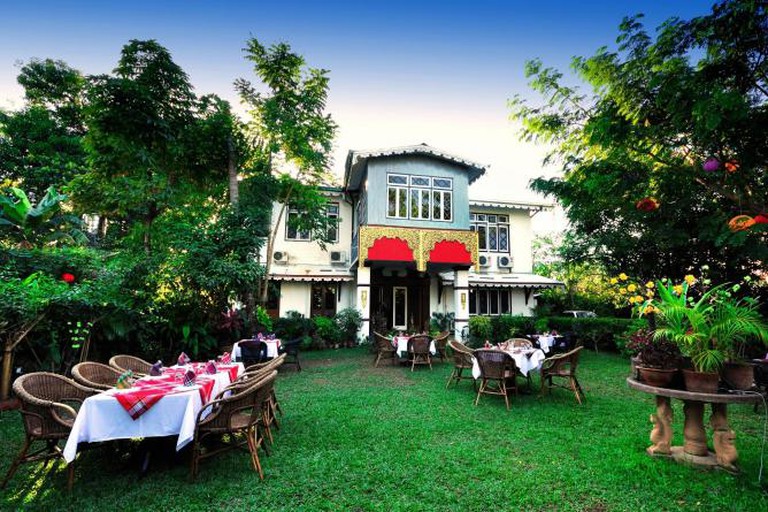 The restaurant and garden | © Padonmar
Padonmar Restaurant moved to its current location, within the high-class residential area of Dagon Township, in 2010. Since its inception as a Thai restaurant in 2003, the restaurant’s menu has expanded to Burmese cuisine. There are delights such as talapaw, a traditional karen soup with fish, aubergine and basil. The building is an elegant 50-year-old house, decorated with gold-leaf wood carvings and festooned with colorful paper lanterns. The main restaurant consists of a hut and garden area, which has a wonderful atmosphere. Upstairs there are four dining rooms, all lavishly decorated with scenes from Burma’s golden age.

Patisserie, Restaurant, Coffee, French, European, $$$
Facebook
Email
Twitter
Pinterest
Copy link
Share
The Burmese could rival the British and the Chinese in their love of tea. Tea is even used in cooking, as in the Burmese delicacy lahpet, which consists of pickled or fermented tea leaves. Tea houses abound in Burma – often, all they offer as decor is a set of chairs popped down on the street, where locals socialize and watch the world go by. Acacia Tea Salon, however is a chic and refined affair. Combining English high tea, European Salon culture and Burma’s wide selection of artisanal tea varieties, Acacia Tea Salon echoes the richness of Burma’s colonial heritage. There is a Casablanca-inspired Moroccan Room, a veranda, and restaurant serving sandwiches and a gourmet a la carte menu. The piece de résistance is the patisserie set in the Glass House. Come here for a taste of colonial era splendor. 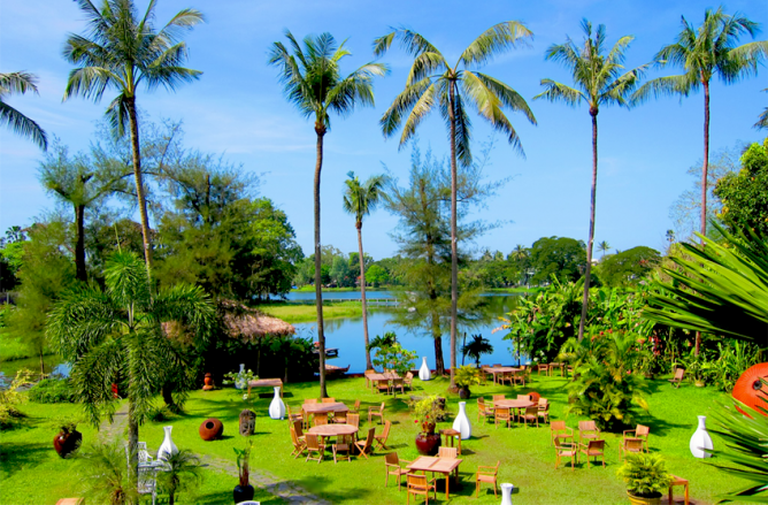 Gardens and lake | © L’Opera
L’Opera is the foremost Italian restaurant in Rangoon, and probably in the whole of Burma. Set in a colonial bungalow on Inya Lake, it is steeped in romance. The menu is authentically Italian, with handmade pasta, wood-fire oven pizzas and imported cured meats and cheese. This is all topped off with an impressive selection of Italian wine. The food is perfect for dining in the beautiful tropical garden, where you can enjoy views of the lake and the soft sound of guitar being played in the background. The spirit of Italy is well and truly evoked here, especially during events such as the Carnival of Venice masked party.

The House of Memories

A living museum as well as a restaurant | © House of Memories
The House of Memories is not just a piano bar and restaurant, but a living museum, housed in a building that played an important part in the country’s history. The 175-year-old building was once used as the headquarters for Burma’s independence movement. It still contains historical artifacts from those days. The main attraction is General Aung San’s secret office, complete with his typewriter, desk and chair. Not only that; the building still conjures up memories of its time as a family home. It has memorabilia of the Nath family on display, and a distinctly warm and welcoming feel. The food is of a high quality, with a selection of Burmese, Chinese and Western food, including many types of rice dishes. In the evening, try one of the highly recommended cocktails while relaxing to the gentle tones of live piano music.

Bar, Restaurant, Asian, Thai, Vietnamese, $$$
Facebook
Email
Twitter
Pinterest
Copy link
Share
Situated in downtown Rangoon, Monsoon Restaurant is a good place to sample a range of Southeast Asian cuisine. Set in a spacious colonial townhouse, with mustard-colored walls, this restaurant is popular with locals, expats and tourists. To sample the best of Burmese cuisine, pick the aromatic and creamy wether acho chet – pork in a sweet curry sauce. In addition to traditional Burmese fare, Monsoon offers dishes from Thailand, Vietnam, Cambodia and Laos, as well as great coffees and desserts. Add to that a laid-back atmosphere and friendly staff, and you are guaranteed a great all-round experience. 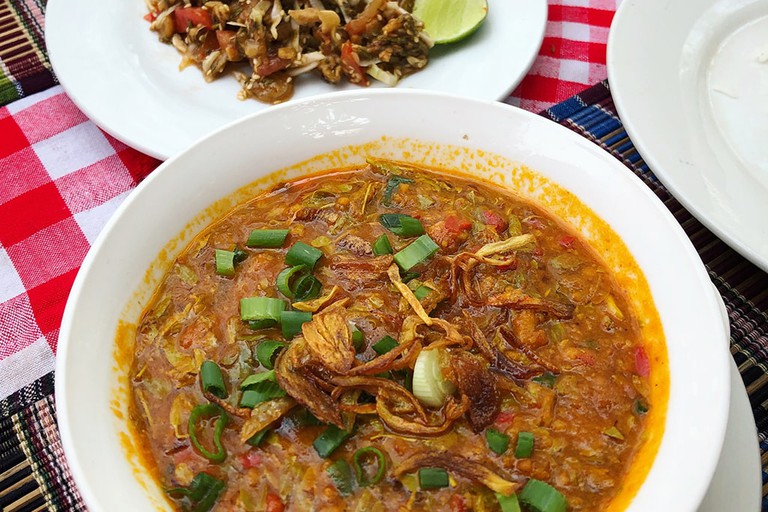 A bowl of tamarind leaf curry next to pickled tea leaf salad at The Moon Restaurant in Bagan | Photo by Steph Liu (@stef_loo)
Bagan is famed for its romantic, untouched landscape of crumbling temples and pagodas. The Moon Vegetarian restaurant is the perfect place to re-fuel in the middle of a long day of sightseeing. It is located on a dirt path, off the main road, on the way to Ananda Temple. The restaurant is an al fresco affair, complete with trees and parasols for shade. It is an extremely popular vegetarian restaurant, regularly called the best in Bagan. The extensive menu has freshly prepared food, including tamarind leaf curry, guacamole and poppadum, and a range of fruit juices and lassi. With friendly service and good prices, The Moon is hard to beat. Although, others will argue that Yar Pyi (just opposite) is just as good.

The quirky French-style bistro, Star Beam, can be found right next door to The Moon Vegetarian Restaurant. The eating experience seems otherworldly in the beautiful surrounding of Ananda Temple. This bistro, which was once charmingly named Star Beans, serves a mixture of good quality European fodder. This includes crunchy baguettes and salads, and traditional Burmese fare such as grilled Irrawaddy River fish and tea leaf salad. The owner and executive chef, Tin Myint, trained under a French chef for 15 years at what is now known as the Governor’s Residence hotel in Rangoon. He is also a friendly character, who will regale you with tales of his travels and culinary exploits.