A Guide to Myanmar's Shwedagon Pagoda 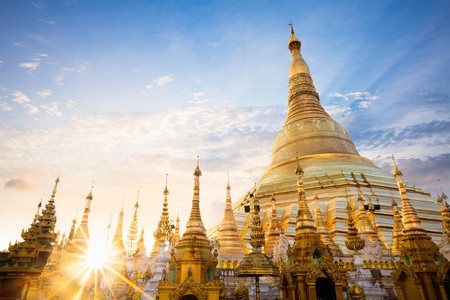 The sun sets behind the Shwedagon Pagoda in Yangon, Myanmar | © Patrick Foto / Shutterstock

Undeniably the country’s most stunning Buddhist structure, Myanmar’s Shwedagon Pagoda enchants all those who tread upon its dazzling 114-acre complex in the heart of Yangon. The Shwedagon is more than a national icon—it’s a treasure—and basking in its magnificence is an absolute must. Here’s how to get the most out of experiencing this ancient wonder of the world.

Reflective of Myanmar’s resilience, the Shwedagon Pagoda shines on

Situated at the top of Singuttara Hill and overlooking the city, this incredibly sacred place has witnessed Myanmar’s dynamic, ever-changing history over the course of an estimated 2,500 years. The Shwedagon has endured severe natural disasters, military occupation, been the site of historic public speeches and protests; and yet, its grandeur exists today to tell each century’s story in the faintest sounds of bells and the loudest patters of bare feet. 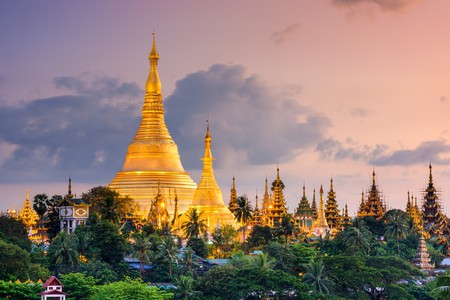 A welcome fit for royalty upon entrance to the Shwedagon

Say mingalabar to the massive pairs of chinthe guarding each of the four covered walkways, known as zaungdan, leading up to the Shwedagon Paya. It’s common to find these colossal lion-like creatures securing the perimeter of temples in Myanmar.

The Shwedagon’s southern entrance is considered the main way to get in, and all but the western entryways are bustling with merchants selling anything from flowers and incense to antiques and souvenirs.

Perhaps the grandest of the entrances with its marble floors and regal columns, the western gate creates the feeling of entering a dreamy palace. This entry also has escalators. If an elevator is necessary, use the southern, northern or eastern gates. 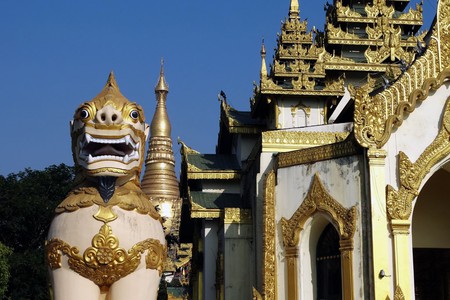 The Shwedagon Pagoda is open daily from 4 a.m.–10 p.m. There’s an approximately US$8 cash-only entrance fee for foreigners. ATMs and moneychangers are located at various points within the grounds of the Shwedagon. Dress modestly and remove shoes. For a small donation, footwear can be dropped off on the way up to the main platform.

It’s possible to book a guided tour to learn even more about the Shwedagon while visiting, or locals hoping to make some extra cash and practice English will eventually surface from the crowd and gladly serve as guides. 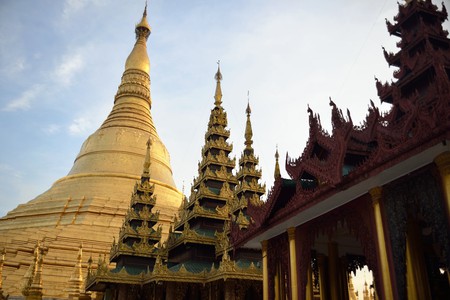 Looking up at the Shwedagon Pagoda in Yangon, Myanmar | © Chase Chisholm

For the most idyllic first impression of Myanmar’s Shwedagon Pagoda in all its glory, enter from the northern covered walkway. The central stupa, rising approximately 325 feet above the terrace, is perfectly framed from this angle.

Surrounding the towering bell-shaped stupa, referred to as a zedi in Burmese, are 64 smaller stupas and four larger cardinal corner ones. 12 planetary posts representing days of the week and the moon’s ascension also encompass the zedi’s base.

It’s hard to fathom or even accurately measure the amount of gold—by the ton—the Shwedagon actually has. The main zedi is plated with tens of thousands of solid gold bars, and the spired umbrella (hti) top, intricately adorned with thousands of diamonds, precious stones and golden bells, is estimated to be worth an astonishing US$3 billion on its own. 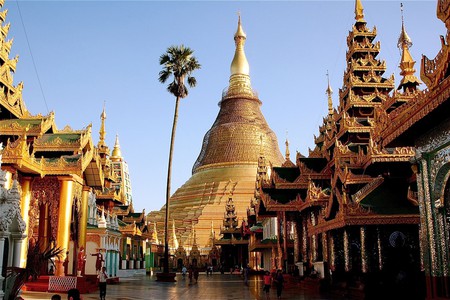 After marveling at the richness of the Shwedagon, it’s time to explore. Head to one of the numerous prayer pavilions for a prime people-watching perch. From here local couples can be seen holding hands, Myanmar families can be spotted praying together, and many tourists as well as monks and nuns from all over the world can be identified.

Perhaps find a quieter worship hall to mediate, or let a temple cat lead you astray. But, beware. The colorful, swirling lights around many of the Shwedagon’s images of Buddha have a way of mesmerizing visitors for hours.

Before leaving, pour water over the Buddha statue at the station or “corner” that represents the day of your birth, and ding a few deep tonal dongs out of the Tharrawaddy Min Bell – one of two unbelievably big cast-iron bells displayed at the Shwedagon.

The Naungdawgyi Paya near the north entrance is worth mentioning. It’s believed to be the original site where eight Buddha hair relics were enshrined. There’s also a small museum near the northwestern corner of the pagoda level, open from 9 a.m.–4 p.m., Tuesday to Sunday, and a nearby photo gallery offering close-ups of the ornate hti atop the main zedi. 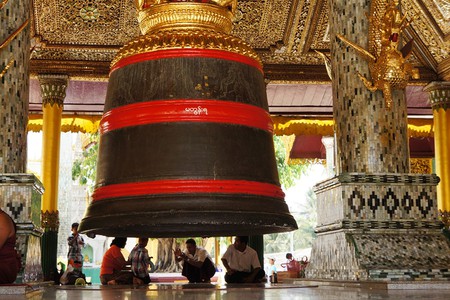 At dawn, dusk and during Buddhist holidays is when to visit the Shwedagon

To see the Shwedagon Pagoda gilded in glorious golden light, the best and busiest times to go are around sunrise and sunset. Venturing to the Shwedagon during the afternoon might not be as crowded, but it’ll be scorching hot depending on the season.

Go during Buddhist holidays such as Thingyan, Thadingyut and Tazaungdaing for an especially memorable experience. 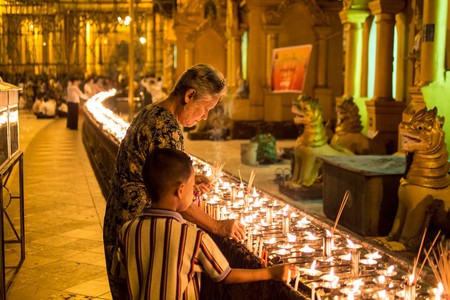 Take the lower footpath encircling the compound for a quieter stroll to see the Shwedagon from a different perspective. This pathway is accessible from all four entrances and isn’t as frequented by tourists. It’s the perfect way to take time to fully process the awesomeness of experiencing Myanmar’s Shwedagon Pagoda.