7 Burmese Dishes Every Tourist Needs to Try in Myanmar 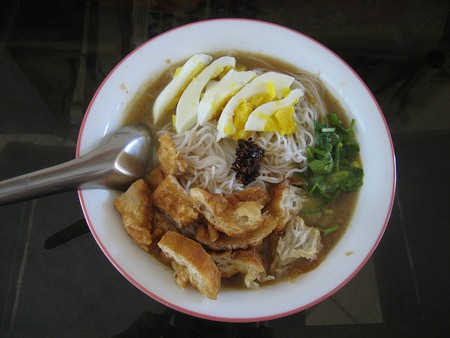 Burmese food is not what most people think of when they think of “cuisines,” but the mix of Indian, Chinese, Thai, and original Burmese influences makes these foods unique to this region. You won’t find many of these outside of the country, so be sure to try them while you’re here.

This breakfast dish has become more than just a morning start. It is now served at all times of the day—some restaurants in Yangon even open late to serve the after-party crowd. Whether you find this on the street or in a fancy five-star restaurant, the essential ingredients are fish soup, rice noodles, eggs, and banana stems. There are infinite variations that include fried beans, scallions, fish cakes, chicken, and more. Try a couple and see what you like, because this dish isn’t easily found outside the country.

Shan noodles are not just found in Shan State, and the dish is a national favorite. Sticky rice noodles are dressed in a mixture of chicken or pork, tomato puree, onions, and spices, then topped off with sour or fresh vegetables. This satisfies most cravings and is a go-to snack because it can be found nearly everywhere. However, venture to Inle Lake, Pindaya, or Taunggyi for some of the best, most authentic Shan noodles of your life. You won’t regret it.

Myanmar is the only country in the world that consumes tea leaves regularly. Most people just drink them. But tea leaves are combined with peanuts, broad beans, cabbage, tomatoes, sesame seeds, chilis, and more. This salad is perhaps the most iconic food, dating back centuries to tea-drinking gossip parties and hosting visitors. Since it is so popular, it can be found in most dining establishments or tea shops. 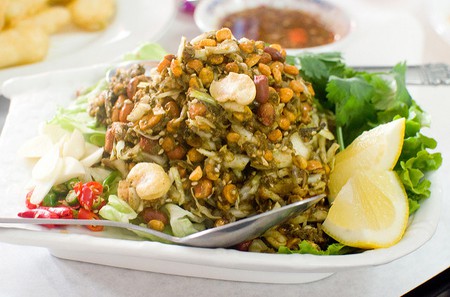 Pork is a prized meat in Myanmar, as is its curry. Curries are mixed with many spices and ginger, and are neither like Indian nor Chinese curries—they are uniquely Burmese. In many tea shops and restaurants, you’ll find curry served with rice and a plate of raw vegetables that is dipped in a fish sauce accompaniment. This satisfying meal will put you back only $2-4 so I suggest you let your taste buds experience this traditional style of cooking.

Many Myanmar dishes are simple and inexpensive street food. If you’re an adventurous eater, these are the dishes that will most satisfy your palette. Often, wheat noodles (or rice) are s mixed with dried shrimp, shredded cabbage, dressed with fried peanut oil, fish sauce, and lime, and it makes for a very easy, quick plate of yummy goodness. You’ll find this in most street stalls with noodles under a plastic colander.

Curried chicken, wheat noodles, coconut milk broth. Need I say more? This Myanmar version of Malaysian laksa and Chiang Mai khao soi hits the spot every time. Thick curry laden with spices, sometimes with onions, and other vegetables, but the result is the same: a bowl of coconut-y delight.

Sure, mangosteen can be found in many southeast Asian countries. But Myanmar has some of the freshest, largest mangosteen I’ve ever seen. This sweet, creamy fruit is covered in a thick shell that is peeled back to reveal the flesh underneath. It’s a beautiful sight. Other exotic Myanmar fruits you should try are: mango, banana, jackfruit, snakefruit, lychee, pomelo, sugar apple, and rambutan. 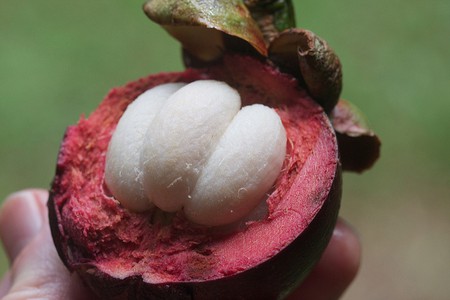 Mangosteen | © James Rose/Flickr
Give us feedback