Top 11 Things to Do at Sabah's Harvest Festival 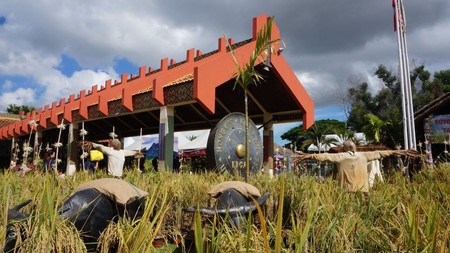 The two-day Harvest Festival in Sabah, or Pesta Kaamatan, was once a critical part of village life and is now a state-wide celebration. From drinking endless glasses of rice wine to playing traditional games and dancing, here are some favourite things to do at Kaamatan.

Sabah’s ethnic diversity is almost as vast as its biodiversity. The Kadazan-Dusun form the largest group, who along with notorious former headhunting Murut celebrate the Harvest Festival in May. Representatives from each district come out in numbers while donning traditional costumes, giving a window into Sabah’s cultural heritage. One of our top things to do at Kaamatan is to interact and meet these people whose ancestors lived in Borneo’s jungles for centuries. 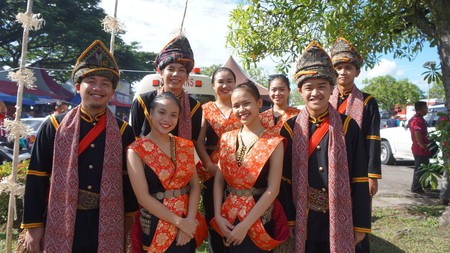 One of the many Kadazan Dusun ethnic groups in Sabah, Borneo | © Sam Bedford 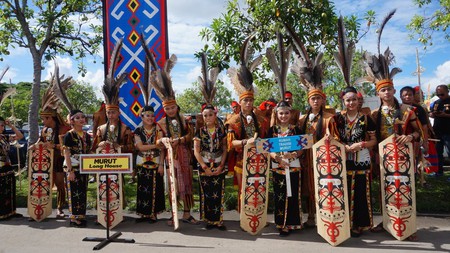 A few generations ago, most of Sabah’s tribes held animistic beliefs. They believed spirits are inside all natural objects. Ancient rituals, ceremonies and sacrifice were commonplace until the arrival of the British and their missionaries in the 19th century. Over time, Sabah’s former pagans including the Kadazan-Dusun converted to Christianity or Islam. Kaamatan is among the few surviving legacies of the old tribal way of life in Sabah. Attending the Harvest Festival promises a glimpse into this ancient practice that once dominated Borneo.

One of the top things to do at Kaamatan for tourists is to shop. Traditional souvenirs from beads and pearls to woven baskets, Sigar hats and ethnic costume line the stalls. Gifts include the sompoton (a bamboo mouth organ with a head similar to a duck’s bill), gongs and bottles of homemade rice wine. 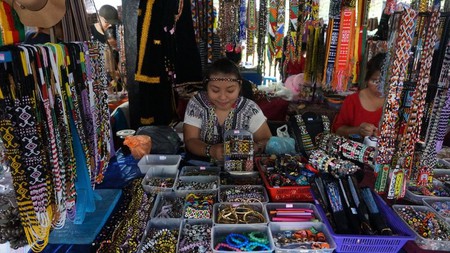 Visitors have the chance to take part in traditional games at Kaamatan. These range from old favourites like tug of war and arm wrestling to the more unusual ones such as finger wrestling with village elders. Or why not have a go at a stilt walking and race the kids? Spear throwing, blowpipe shooting and jumping on the ‘bamboo bouncy castle’ are others. The locals welcome everyone and encourage tourists to join in the fun.

Mangunatip, more commonly referred to as the ‘bamboo dance’, needs agility and skill. Two dancers decked out in traditional clothing begin to jump and dance in sync as two bamboo poles tap against the floor and each other. The dancers need to be fast as they leap between the bamboo, especially when the music and tempo gets progressively faster. From the audience, the dancers almost look like they’re floating. 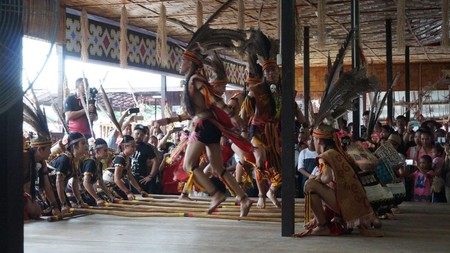 Sabah’s Harvest Festival ends with Unduk Ngadau (Beauty Pageant) on May 31. The origins run deep to the core of Kadazan-Dusun culture. Centuries ago, pagan tribes suffered a famine. Their God sacrificed his daughter Huminodun and sowed her flesh into the ground, saving the people from imminent death. Her spirit passed into every single grain of rice, which is called the Bambaazon. The Harvest Festival in Sabah honours and thanks Bambaazon. The beauty pageant attracts contestants from different districts and sub-districts to find the girl who most resembles Huminodun to honour her sacrifice. Winners take home a cash prize of RM12,000 ($3,000 USD). 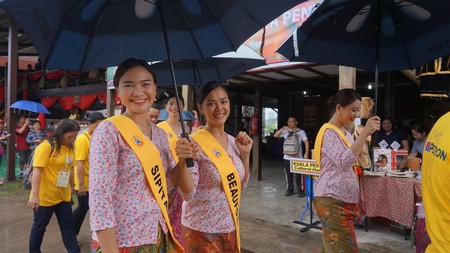 Who doesn’t like the opportunity to sample ethnic food and delicacies? The Harvest Festival in Sabah provides a selection of dishes with recipes passed down generations. We recommend Hinava, a type of raw fish sharing similarities with Japanese sashimi. Villagers marinate the fish in lime juice to kill the bacteria and infuse a tangy taste. Other dishes include wild mango, kampung-style steamed fish and lots of pork. 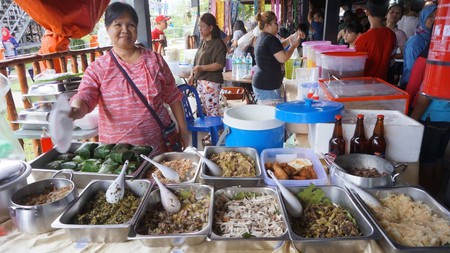 Only the brave and adventurous try sago worms. Known locally as Butod, the fat grub spends most of its life snacking on the sago palm. But getting over the fact it’s an insect is just the first hurdle. People eat sago worms when they’re still alive. Simply take the grub from a container, clean it in water, hold its head and bite. Expect a gooey and almost sweet explosion with a texture similar to custard. After swallowing the gooey part, the chewy part is kind of like the skin of fruit. Visitors can buy freshly caught sago worms in a cup or prepared with chilli from a stall.

The bobohizan is a type of shaman who communicates with the spirit world and performs rituals and ceremonies. With ancient wisdom and practices, priestesses were once a cornerstone in the village community. Today, their role is more ceremonial. At the start of Kaamatan, visitors can watch a group of elderly bobohizan perform ancient rituals to officially start the two-day celebration. For some, this is one of the best things to do at Kaamatan because so few ancient communities retain this part of their culture in the modern world. 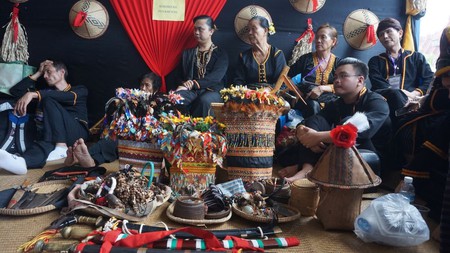 Rice plays a central role in the Harvest Festival. As the day progresses, more people will share their homemade rice wine known locally as tapai. Traditionally, large ceramic jars of tapai cover long communal tables and people go around drinking each through a bamboo straw. Dispense the sweet alcoholic drink from a bamboo container into a bamboo glass. Some of the village elders will sit around the tables in the ethnic houses with their own homebrewed jars infused with coconut flesh. Kadazan-Dusun hospitality and the spirit of Kaamatan welcomes everyone and especially tourists to taste the wine. 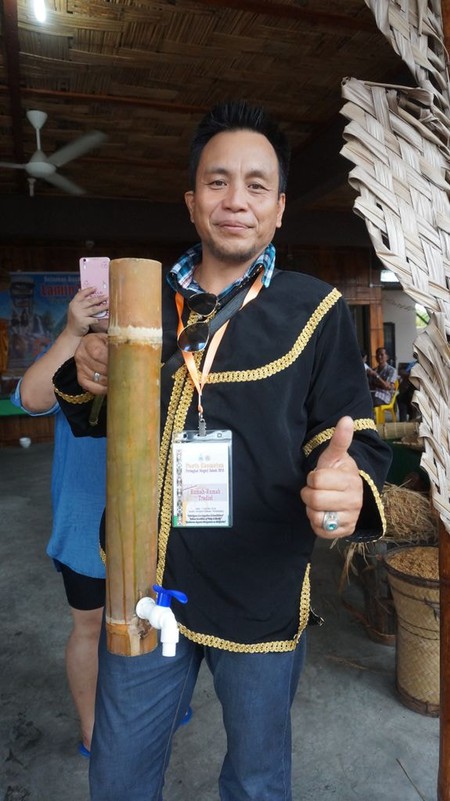 Dance the Sumazau with the locals

After consuming enough rice wine in the afternoon, head to the houses and join in traditional dances. Most of the moves consist of slow shuffling in a side-to-side manner while gently swaying the arms. Not only is this among the best things to do at Kaamatan for a cultural experience, but it’s also incredibly fun. Different groups sit in different houses and each have their own songs and dances. And if unsure, the locals will jump at the chance to show a foreigner the moves! 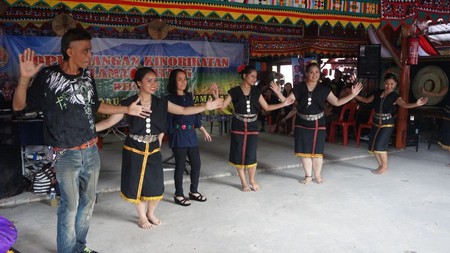 Feel free to join in the Sumazau dance with the locals! | © Sam Bedford
Give us feedback