The Best of Malaysian Pop Music 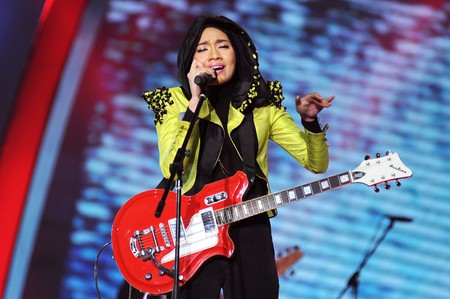 If you haven’t heard these folks, you’re not really Malaysian.

The US has Mariah Carey and the UK has Adele — so it’s only fair that Malaysia has Siti Nurhaliza.

This “Voice of Asia” had her humble beginnings in Pahang as one of eight children, and used to help her mother sell kuih (local cakes) at the local market. She has jokingly commented that all those years of calling out for customers has helped her vocal skills.

Today, the singer, producer, and businesswoman has earned over 200 national and international awards. She sang for the Commonwealth Games in 1998, performed at the Royal Albert Hall, and founded her own fashion brand, Creación, in 2016.

Her most notable singles include “Bukan Cinta Biasa”, “Seindah Biasa”, and “Seluruh Cinta”.

Carried into international fame by her critically acclaimed single, “Crush,” Yuna has been making the national, international, and MySpace (yes, remember when that was a thing?) stage since 2007, when she released her EP single, “Deeper Conversation”.

Known for her colourful, conservative headwear, she’s proof that you can be successful without selling out. She has performed on Jimmy Kimmel Live! and worked with Pharrell Williams and David Foster.

If you haven’t already heard it, listen to “Crush” here. Yuna’s soulful notes will make you shudder.

Winner of the first-ever Malaysian Idol, Jaclyn was one of the great musical discoveries of the 2000s. With powerful, diaphragmatic vocals, Jaclyn has performed at the SEA Games to much acclaim.

Her signature tracks include “Gemilang”, “Tiada Lagi Indah” and “Without You”.

This singer-songwriter, model, and actress is a formidable figure in the Malaysian entertainment business. Since signing on with BMG Asia Pacific and releasing her debut album “Madah Berhelah” in 1991, Ziana has gone down in history as one of Malaysia’s iconic singers.

First runner-up of One in a Million (reality singing competition show) in 2006, Faizal has won multiple Anugerah Industry Muzik awards (that’s Malaysia’s Grammy Awards for you), and continues to entrance audiences with his soulful music.

Popular singles include “Sayang” and “Sejati”.

They Will Kill Us All

Band members Edwin Raj, David Leong, Amir Shazlan, Herwandi Saat, and Ihsan Ariffin have been “killing” it for 10 years now. When asked about the name of their band, Amir has implied that it’s better than a “safe” name like “Wonder Bread”.

Their music has evolved since their inception, with more focus on emotional intensity. Tracks include “Shallow Graves”, “Future Night”, and “The Country Song”.

This five-person rock band was nominated for the “Best New Artist” category at the Anugerah Industri Muzik awards in 2011. Fresh, young, and favouring relaxed beats, band members Fuad, Gael, Hairi, Shakeil, and Shanjeev first came together in 2009, and later created their first EP called “An Album”.

A contemporary of Ziana Zain and Ning Baizura, Anuar is one of the mainstays in Malaysia’s music industry. With four albums under his belt, this talented artiste has won numerous awards with his deep, yet gentle, vocals, including the Anugerah Planet Muzik, Anugerah Industri Muzik, and the Anugerah Era.

Notable songs include “Andainya Takdir” and “Cinta Takkan Berakhir”. (Check out both music videos; they’ll leave you wanting a third.)

One of Malaysia’s earliest commercial singing successes, Ning Baizura has performed all over the world and won multiple awards, including the Anugerah Planet Muzik, the AIM Awards, and the Voice of Asia in 1991.

She may be the youngest on our list, but this up-and-coming singer has proven to be more than a one-hit wonder. She began her career on Youtube, singing covers with a ukulele, but has since graduated to her own EP entitled “Maafkan Aku” (Forgive me).

She’s known for her songs, “Tabah”, “Knock Knock” and “Setia” (featuring Faizal Tahir). She also acts and has appeared in several local films and TV soaps, including “My Darling, Inspektor Daniel”.