The 7 Most Beautiful Beaches in Sabah 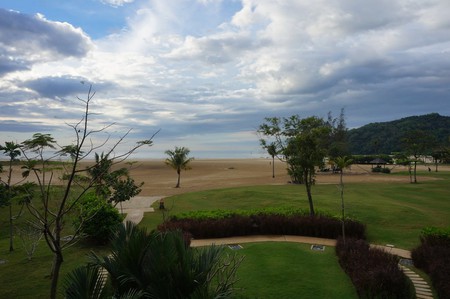 View of Pantai Dalit from the resort | © Sam Bedford

Hundreds of kilometres of tropical coastline, beautiful stretches of sand and crystal clear water bless most of Borneo. Here are the best beaches in Sabah, Malaysian Borneo, featuring some of the world’s most stunning sunsets, snorkelling and isolated islands.

Located near Kota Kinabalu International Airport, Tanjung Aru with its orange sand and gentle waves rates as a top beach in Sabah. Stretching for approximately two kilometres (1.24 miles) with a section inside the nearby Shangri-La Resort, locals and tourists regularly come for one of Borneo’s most spectacular sunsets. A large park hugs the sand along with small huts and spots for a beachside barbecue. Dive into the warm water for a swim and to enjoy the views of the tropical shore from the sea. Just be aware of strong undercurrents and jellyfish. Tanjung Aru is approximately six kilometres (3.7 miles) from Kota Kinabalu. 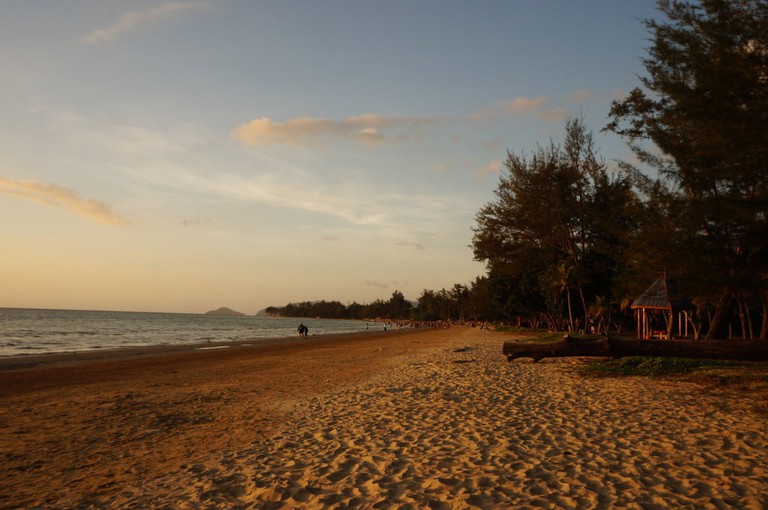 The Shangri-La’s Rasa Ria Resort in Tuaran rates as one of the most beautiful beaches in Sabah surrounded by a whopping 400 acres of tropical vegetation. Picture white sand stretching almost as far as the eye can see with a dense jungle-covered outcrop in the near distance. The gentle water is a playground for swimmers. After relaxing on the sand, head for a sunset cocktail at the resort’s Sampan Bar. Rasa Ria and Pantai Dalit go hand-in-hand to create the definition of a tropical paradise. From Kota Kinabalu, it takes 40 minutes to reach the beach and resort. 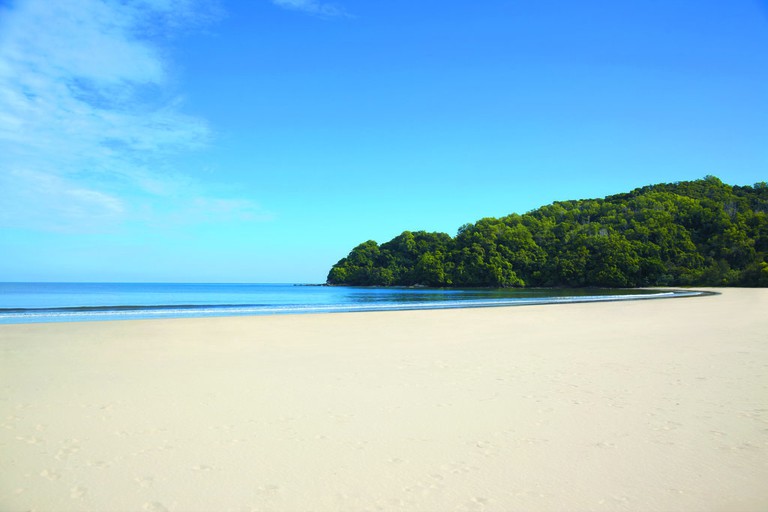 Kudat, approximately 170 kilometres (105 miles) from Kota Kinabalu, forms what’s called ‘The Tip of Borneo’. Once an important trading point during the British colonial days and now a major tourist attraction, Kudat forms an interesting day or overnight trip from the capital. But the beauty doesn’t just lie in the region’s location and exoticism of being far from civilisation. Kelambu Beach towards the Tip of Borneo has beautiful white sand and a relatively secluded feel. Those who visit often have the beach to themselves. Stay overnight in Kudat and return in the evening for the sunset and views of the Milky Way on a clear night. 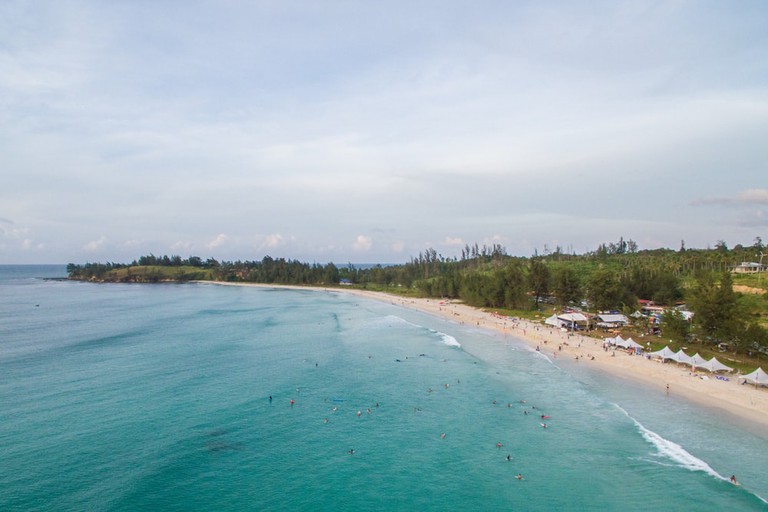 Enjoy the beach while on a trip to The Tip of Borneo, Kudat | © Yusnizam Yusof/Shutterstock

Part of the Tunku Abdul Rahman Marine Park off the coast of Kota Kinabalu, Manukan Island is arguably the best beach in Sabah. Within just 15 minutes from Jesselton Point by ferry, visitors will be greeted by a 1.6-kilometre (one mile) stretch of white sand surrounding both sides of the island’s jetty. The sand is clean and facilities include changing rooms, clean toilets and nearby restaurants. The crystal clear waters form the perfect place for snorkelling while the dense jungle houses hundreds of macaques. Beware: the monkeys have a notorious reputation for stealing people’s belongings when they’re swimming in the sea! 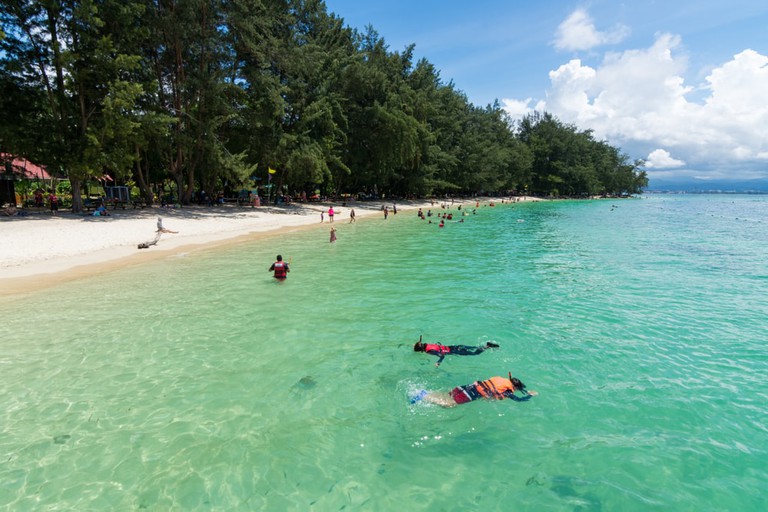 Pulau Tiga, also called Survivor Island after featuring on reality TV series Survivor, lies approximately 50 kilometres (31 miles) southwest of Kota Kinabalu. The small series of three islands has several isolated beaches including Pagong Pagong, Ramis and Asmara. Expect refreshingly clean sand and gentle waves surrounded by rainforest to complete any visions of a faraway desert island. But, to experience this paradise does involve a challenge to reach the island. First, visitors need to drive a few hours to Kuala Penyu before taking a boat across to Pulau Tiga. Accommodation is available on the island. 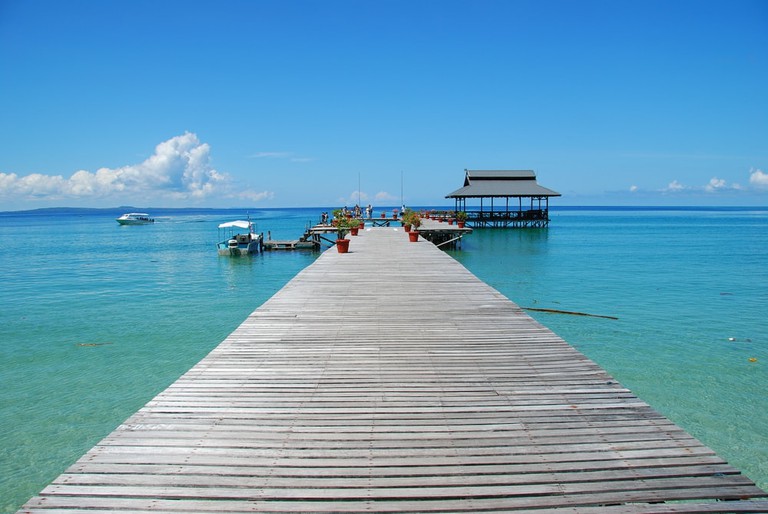 Universiti Malaysia Sabah sprawls to the northeast of Kota Kinabalu. Located next to the Aquarium and Marine Museum, this stretch of coastline’s white-sand borders is against a dense layer of jungle. Often part of city tours, most visitors stand near the pier on the rocks to snap a few photographs before leaving. But head a little further along and be blessed with some of the cleanest stretches of sand in Kota Kinabalu. Pulau Sepangar is visible directly in front while Pulau Gaya dominates the skyline to the southwest. 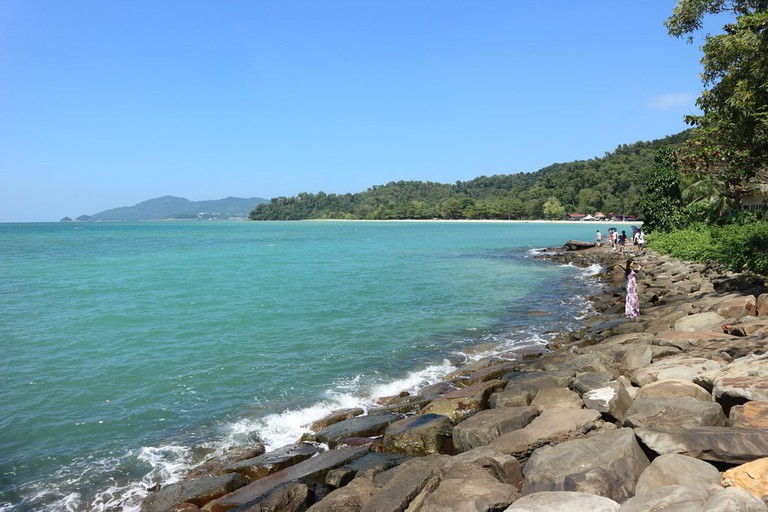 Tourists are taken here as part of the tour | © Sam Bedford

For an isolated beach far from civilisation, head to Si Amil Island approximately one hour by ferry from Semporna. While the island often attracts diving enthusiasts for the clear water dropping to a depth almost 100 metres (328 feet), few take the time to relax on the beach. Just behind the white sand, a large hill covered in dense rainforest dominates the skyline while the vast expanse of the ocean fills the horizon. Visitors will most likely be the only people on the beach apart from the resident monkeys. Those looking to experience the biodiversity of marine life while later relaxing on a beautiful beach in Sabah away from the tourists will appreciate Si Amil.