The Most Beautiful Islands in Malaysia 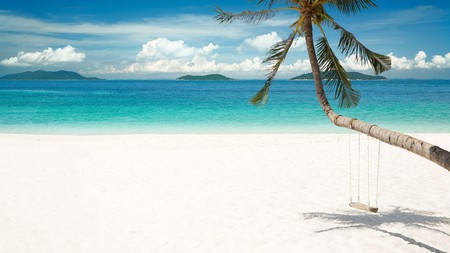 On lush tropical islands, the beaches of Malaysia – pristine, with world-class diving and often deserted – are second to none. There are more than 800, so follow the Culture Trip guide to the very best islands in Malaysia and how to explore them.

With islands across both sides of Peninsular Malaysia and around Borneo, there’s a lot of variety to take into consideration. Almost a million residents live on some; others consist of just a handful of wooden shacks. We’ve found the perfect places to go for duty-free drinks, the cheapest place to learn to dive, and the best way to enjoy an ultra-luxurious vacation on a Sultan’s private island.

Langkawi: the jewel of Kedah 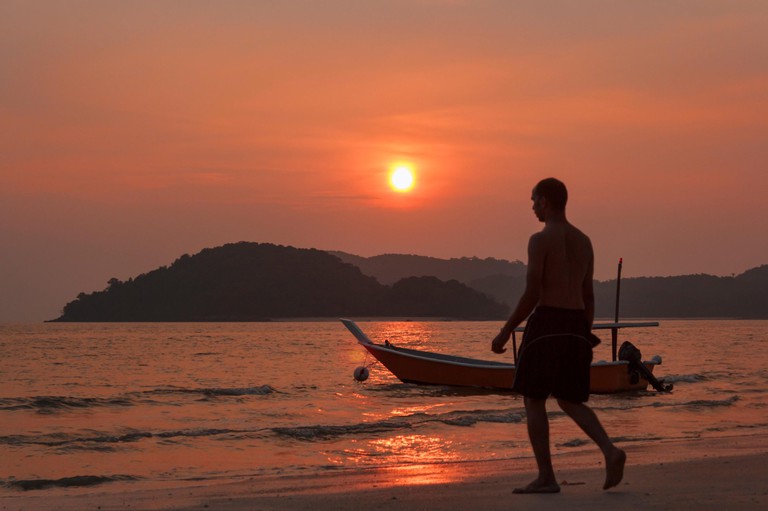 On the west coast of Peninsular Malaysia, Langkawi is a mountainous group of 99 islands that, partly thanks to their duty-free status, are some of Malaysia’s most visited. On the main island, ride the SkyCab cable car up into the tree-blanketed hills for glistening views, or take your towel down to sandy Cenang Beach for some sunbathing and a drink at a beachside bar. For a day trip, book onto a boat tour heading south to the Lake of the Pregnant Maiden on Langkawi’s heavily forested sister island, Dayang Bunting. You’ll find a monkey colony with residents who are happy to join you for lunch – or swipe it out of your hands altogether. 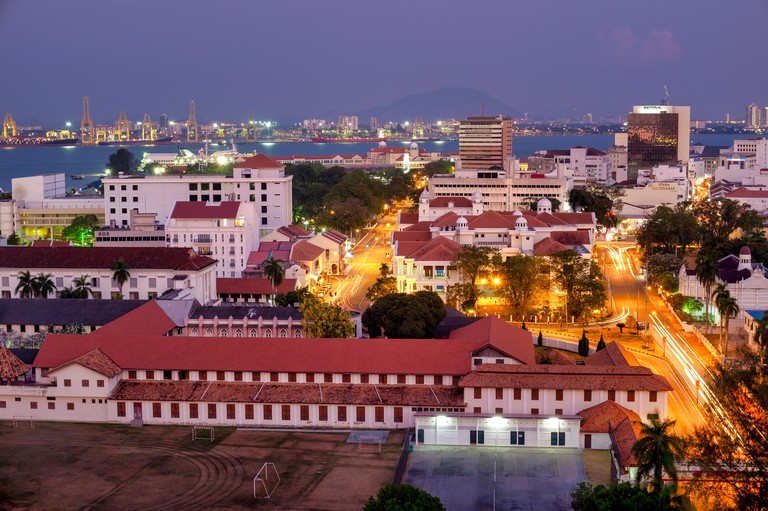 About 100km south of Langkawi, Penang is an island for the historically-minded traveller. It’s home to George Town, a Unesco-listed trading post muddled with Buddhist temples, Chinese boarding houses and British colonial architecture that dates back to the late 1700s.

Inspect the cannons at Fort Cornwallis, a star-shaped stronghold of the East India Company, then head to the city limits to find the sprawling Kek Lok Si Temple in the foothills – it features an unusual gold-topped pagoda tiered in Chinese, Thai and Burmese styles. Take a taxi north of George Town to visit the traditional Penang Botanic Gardens by day, or the LED-lit Penang Avatar Secret Garden at night. The funicular at Taman Lintang can take you to to the top of Penang Hill – part of a mountain range that runs down the centre of the island – where you’ll find a rainforest nature reserve with views over George Town.

Open In Google Maps
Penang, Malaysia
Give us feedback

Natural Feature
Facebook
Email
Twitter
Pinterest
Copy link
Share
Map View
If you’re looking for somewhere without tourists, check out Pangkor Island. Further down the west coast of Peninsular Malaysia, this island lies off the coast of Perak state and features empty beaches, clear water and thick jungle covering the centre. A fraction of the size of Langkawi or Penang, Pangkor is a far more quiet option and visitors appreciate the chance to sunbathe under the palm trees without another soul in sight. For the most popular beaches, head to the west side of the island to Nipah Bay and its quieter neighbour Coral Beach; for a really deserted beach, head to Tortoise Bay – there are no shop or buildings other than a turtle conservation centre. Be sure to check out the island’s 17th-century Dutch fort, snap photos of a traditional wooden jetty and feed hornbills at Sunset View Chalet in Nipah Bay.
Open In Google Maps
Malaysia, Malaysia
Give us feedback

The Perhentian Islands: learn how to dive

The Perhentian Islands, part of Terengganu state, lie off the north west coast of Peninsular Malaysia. Two islands, Perhentian Kecil (Perhentian Small) and Besar (Big), attract beach lovers, divers and snorkellers. You’ll arrive from the mainland in a small boat, and you can forget about roads once you’re there: the only way to get from one beach to the next is to catch a water taxi or trek along jungle trails. Head to Kecil for some of Southeast Asia’s most affordable diving schools and meet other backpackers on Long Beach. Book a resort on Besar for a more exclusive resort getaway with even more remote beaches to the north.

Open In Google Maps
Terengganu, Malaysia
Give us feedback 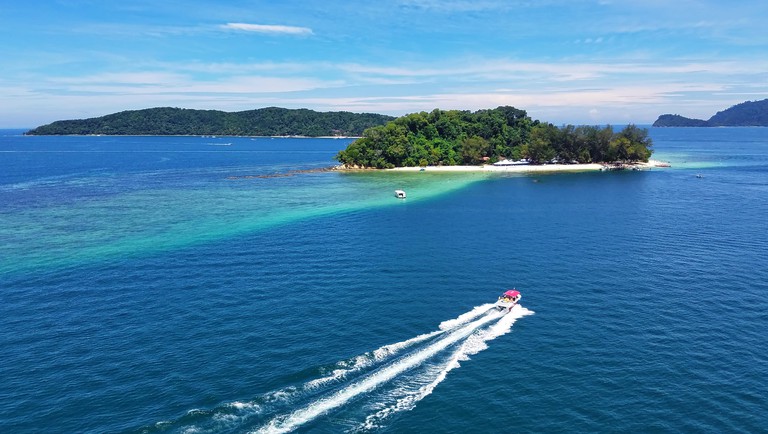 Five islands off Malaysian Borneo – part of the northerly Sabah state – form the Tunku Abdul Rahman Park. Speedboats connect the protected islands to Kota Kinabalu on the mainland in less than 15 minutes. Head to Manukan island for a beach and snorkelling experience. Gaya Island, the largest, presents more opportunities for hiking and exploring a floating village. 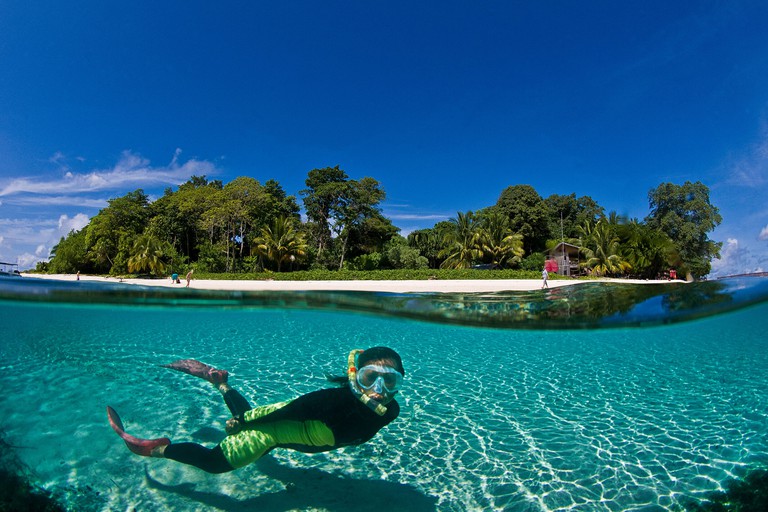 This tiny egg-shaped island an hour’s boat ride south of Semporna in Sabah, Borneo, rates among the world’s top diving areas thanks to its abundance of wildlife, including green sea turtles, gigantic parrot fish and whirling schools of barracuda. Enjoying protected status, fewer than 200 tourists can dive at the site per day, so getting a permit in advance is essential. You won’t find accommodation or many facilities (divers must stay on one of the neighbouring islands or overwater resorts) and you’ll need to join a tour. But it’s well-worth the flight from Kota Kinabalu to Semporna.

The Mantanani Islands, near Kota Belud in the north of Sabah, offer some of Borneo’s finest diving within an hour’s boat ride from the state capital, Kota Kinabalu. Snorkellers and divers flock on day trips from the capital to swim with whale sharks, seahorses and stingrays. The scuba-certified can dive at more than 20 locations, including three barnacle-encased shipwrecks. After a few hours in the South China Sea, unwind on the pristine white sand beaches for a Bornean sunset. 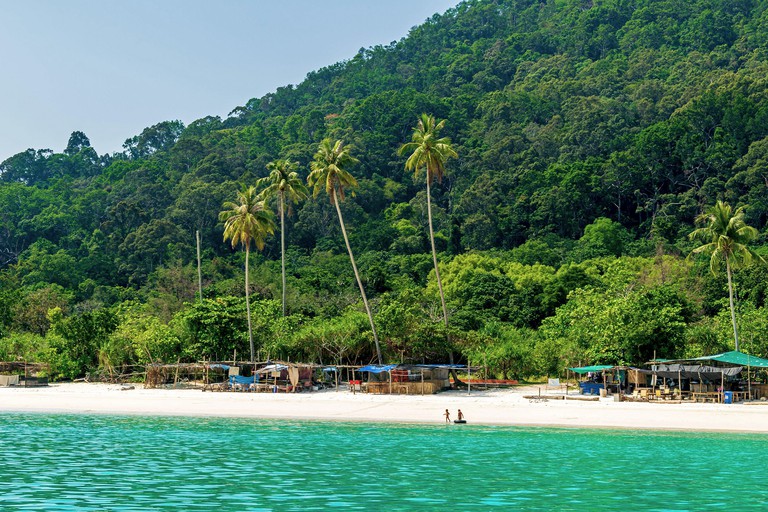 Nine islands form the Redang Island Marine Park off Terengganu state. Geographically they sit close to the backpacker-friendly Perhentian Islands; in terms of luxury they’re a million miles away: this archipelago lures upscale tourists who wouldn’t think twice about spending thousands on their holiday. Anticipate Malaysia’s best resorts, immaculate shorelines and a thriving diving scene. After featuring in the Hong Kong hit-movie Summer Holiday in 2000, the once little-known spot has been transformed into a lavish Malaysian getaway.

The Sultan of Johor owns Rawa Island, which lies off the east coast of Johor state, north of Singapore. With only 77 rooms – hillside deluxe, beachfront, waterfront or frangipani villa – the Sultan doesn’t receive a great deal of guests each year. With dazzling white sand, dramatic rocky outcrops and excellent facilities, Rawa Island Resort attracts those seeking exclusivity. It’s ideal for a honeymoon — just remember that you’ll need book up to three months in advance.

Open In Google Maps
Johor, Malaysia
Give us feedback

Tioman Island: Time magazine’s most beautiful island in the world

In 1970, Time magazine voted Tioman as one of the most beautiful islands on Earth. Move forward to the 21st century, and we can safely say it still retains this title. With palm-tree fringed white sand beaches, crystal-clear water and jungle-covered hills, it has everything you’d want from a tropical island. Alas, while it is a quiet island, it doesn’t quite offer the near total seclusion that Time experienced in the 1970s.

Some of you might recognise Tiga Island as the original Survivor island. The small archipelago that directly translates to Three Islands hosted the first season of the world-famous TV series. Flash forward to the present and tourists visit on a day trip from Kota Kinabalu. Relax on the deserted island’s empty beaches, hike to mud volcanoes or spend the night in a luxurious resort.

Picture a small island off Malaysian Borneo with nothing but a handful of resorts lining the glistening white beaches. Add to it some turquoise water, vibrant coral reef and thousands of tropical fish. Combine them with the occasional hawksbill and green turtle, and you have Pom Pom Island. This piece of paradise belongs to the Semporna Archipelago in east Sabah. While it’s challenging and time-consuming to reach, having this environment to yourself will be worth it.

Open In Google Maps
Sabah, Malaysia
Give us feedback 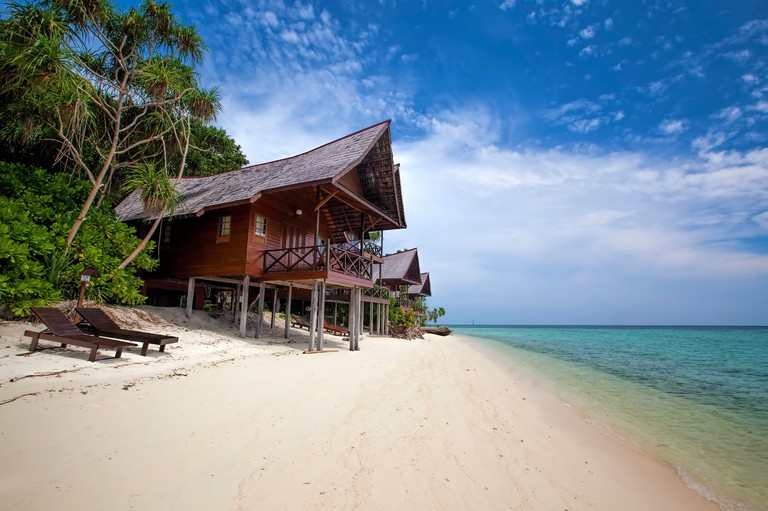 Another outrageously small outcrop of white sand and jungle, Lankayan Island lies in the Sulu Sea luring diving enthusiasts and holidaymakers looking for an upmarket getaway. Situated off the northeast coast of the state of Sabah, Borneo, the island has just 18 wooden chalets and offers mangroves and coral reef to explore. Lankayan is recommended for couples, families and divers. To reach it, fly to Sandakan Airport then take a 90-minute ferry to the island.

Kapas Island: lounging under the palm trees on empty beaches 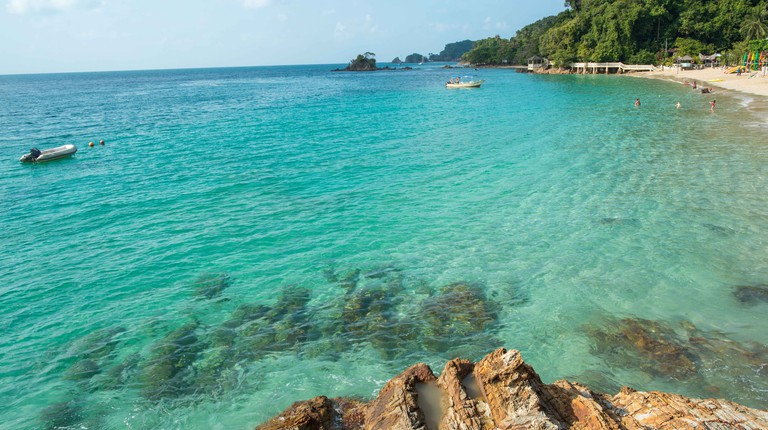 This relatively unknown spot off the coast of Terengganu state has views and tropical landscapes with a favourable beach-to-resort ratio. Spend your days roaming its jungle-backed beaches and picking your way across the craggy rocks facing onto the South China Sea – there isn’t a great deal more to do. The island’s handful of modest guesthouse-style beach resorts cater for the backpacker crowd. This is among the most beautiful islands in Malaysia for those who want to lounge on the beach all day.

Tenggol is a beautiful island for a private getaway. Located towards the southern end of Terengganu state, it offers a range of activities, from snorkelling to diving and jungle trekking. If you visit, be sure to join one of the whale shark tours – the marine life here is outstanding. Getting to the island is a challenge that involves flights, taxi rides and boats – but the exclusiveness is worth it.