The 10 Best Ecotourism Experiences in Borneo 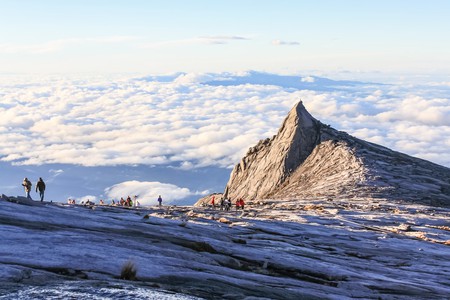 Borneo is a haven for ecotourists. With vast areas of rainforest, endemic species found nowhere else and an abundance of marine life, there’s little wonder why ecotourism in Borneo is thriving. We round up the best experiences, from seeing orangutans and proboscis monkeys to hiking Mount Kinabalu.

Proboscis monkeys are some of nature’s strangest animals. With a big potbelly and a long floppy nose, the rare primates help drive ecotourism in Borneo. For a chance to see the monkeys in the wild, take a river cruise along the Kinabatangan River in East Sabah. Or visit Beaufort near Kota Kinabalu where guides entice the monkeys into the open with food. 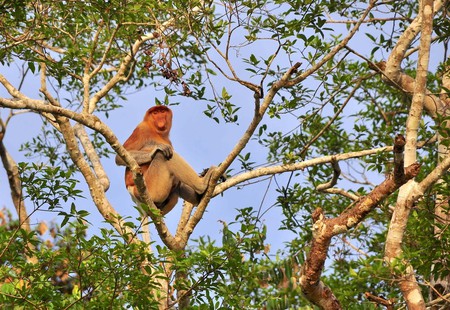 Borneo and Sumatra are sadly some of the few places in the world where you can see wild orangutans. The bulky primates with their characteristic long orange hair live in the jungles of Borneo. Lucky tourists might catch a glimpse of some living in their natural habitat at Danum Valley or along the Kinabatangan River. Tourists can visit rehabilitation centres at Sabah’s Sepilok or Sarawak’s Semenggoh’s Nature Reserve too.

Anyone looking to experience the jungle will love Danum Valley. The rainforest sits approximately two hours from Lahad Datu in East Sabah and is about as wild as it gets. Tourists can stay in the ecolodges and join activities, such as trekking through the jungle with expert guides, canopy walks and wildlife tours. As of 2018, Danum Valley remains relatively unknown outside of Borneo. Visit now before it gets overrun.

All of Earth’s rainforests house uncountable numbers of lifeforms. But the rainforests and jungles of Borneo are unparalleled and often said to be the most biodiverse in the world. A range of biomes and ecological niches in the lowlands, highlands, mangroves and swamps hold tens of thousands of different species. This includes several primates, rare birds and probably a substantial number of undiscovered plants and animals too. A driving factor for ecotourism in Borneo is the accessibility of these rainforests and jungles. Most can be reached within a few hours from major towns and cities.

Mount Kinabalu stands proudly at 4095 metres (13,435 feet) above sea level in the heart of Sabah. Featuring on the state’s flag and having deep cultural ties to local indigenous tribes, Mount Kinabalu is a major attraction and state treasure. Hiking to the summit takes two days with an overnight stay at Laban Rata. Climbers continue to the top and watch the majestic sun rising out of a sea of clouds the following morning. Mount Kinabalu drives ecotourism in Borneo and as such, the limited spots for hikers often fill up months in advance.

From snorkelling in the Tunku Abdul Rahman Marine Park’s crystal clear waters near Kota Kinabalu to visiting the world-class diving sites in Kalimantan’s Derawan Archipelago, Borneo is an underwater paradise. Expect vibrant and colourful coral, countless species of fish and the occasional shipwreck. The abundance of marine activities are a big factor driving ecotourism in Borneo.

Spend Time in Protected Rainforest in the National Parks

Malaysian, Indonesian and Bruneian Borneo has dozens of alluring national parks and protected areas. Danum Valley Conservation Reserve and Kinabalu Park in Sabah are favourites. The first is in virgin jungle and the second sits at the foot of Mount Kinabalu. Sarawak’s national parks are at the same level and include a vast diversity in wildlife and hundreds of caves. Even the tiny Sultanate of Brunei has nature reserves reachable within 30 minutes of the capital. Few people outside of the tropics have the opportunity to visit protected rainforests. But tourists in Borneo can.

Sarawak’s claim to fame is its network of caves. Niah National Park, approximately 100 kilometres (62 miles) from Miri holds a place in the hearts of archaeologists. Human remains, believed to be 40,000 years old and the oldest in Asia, were found inside. The UNESCO-listed Gunung Mulu National Park combines steep limestone cliffs with an impressive network of passageways. Caving activities range from walking through the caverns to spending several days on an extended exhibition. 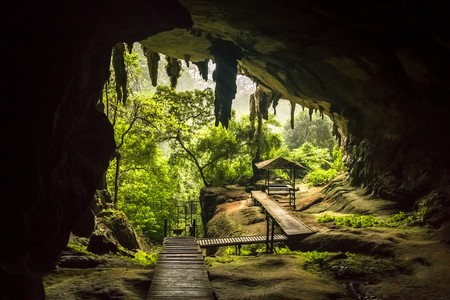 Anyone who has seen hornbills is immediately mesmerised by their unorthodox beauty. With big eyes and a long protruding horn above their beak, the birds resemble something out of a cartoon. Hornbills live around Malaysia with most of the country’s species living in Sarawak, aptly named ‘The Land of the Hornbills’. Sarawak houses eight of the world’s 54 types and the rhinoceros hornbill features on the state emblem. Hornbills in Sarawak have deep cultural ties to indigenous tribes too.

Borneo’s Rafflesia (‘Stinking Corpse Lily’) has the unenviable title as the world’s smelliest flower. The giant plant has just five petals and releases a fetid odour resembling rotting flesh to attract insects. The insects can then spread its pollen. Rafflesia is endemic to both Borneo and Sumatra and can be found inside Sabah’s Rafflesia Forest Reserve near Kota Kinabalu and Kinabalu National Park. 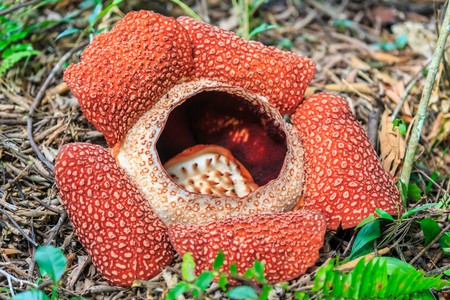