You’re launched down its yellow-and-blue length on an inflatable mini-raft – which two people can ride at once – rushing along straight sections and around sinuous loops as water splashes around you and green leaves flash past your face. 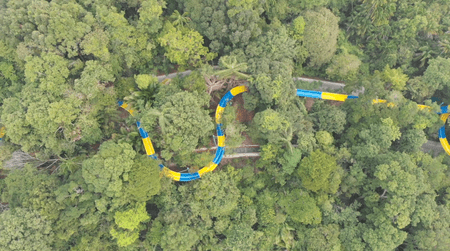 The ride is called the Longest, and it comes with some impressive statistics. The slide itself took eight months to build and uses 66 tonnes (145,505 pounds) of steel – unlike many water slides, it’s a permanent structure. You’re transported to the top by Malaysia’s only chairlift. And when it comes to size, it has no rivals – the former record holder, at New Jersey’s Action Park, runs for a relatively puny 600m (1,969ft), meaning the Longest offers almost double the ride.

The Longest is just one part of ESCAPE, which offers zip lines, bungee jumps, slides, aerial assault courses, trampolines, downhill triking, stilt walking and tree climbing, plus pools to relax in and displays of gymnastics and diving. According to the owners, it aims to re-introduce ‘the play and values of yesteryear…to inject reality into a world overdependent on an isolation-inducing electronic lifestyle’. So don’t post those selfies until you’re outside the gates.

ESCAPE is open Tuesday through Sunday from 10am to 6pm. It’s on Malaysia’s Penang Island, about 45 minutes from Georgetown, the appealing, cosmopolitan state capital. Georgetown itself has temples, boutique cafés, art, festivals and some of the world’s finest street food. Elsewhere in Penang, you’ll find wildlife-packed national parks, good trekking routes and long beaches.

Base yourself at ESCAPE’s own BASE CAMP accommodation, in Georgetown or in the resorts, guesthouses and homestays of the coast and interior.