Meet the Traditional Craftsmen of Penang 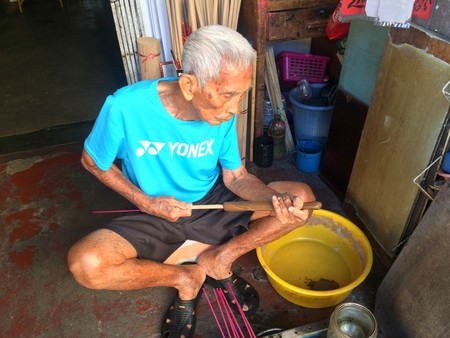 Penang’s George Town is a melting pot of both development and living heritage. Through the stories of two traditional craftsmen, one making incense sticks and the other hats, there’s much to learn about the changing face, and living heritage, of a city adapting to its new-found status.

Heritage has become synonymous with Penang, Malaysia since 2008, when UNESCO awarded World Heritage Status to the state’s capital, George Town, a labyrinth of grand Chinese clan houses, monumental colonial buildings, brightly-coloured Indian temples and ancient muslim mosques. In a stroke, the bulldozers were stopped in their tracks from demolishing a unique cultural and architectural community, and George Town was rapidly transformed into one of Asia’s tourism hotspots. Instead of building towering condominiums and futuristic shopping malls, UNESCO restrictions forced creative entrepreneurs to convert traditional shophouses and palatial mansions into stylish boutique hotels, design showrooms, hip barista bars and gourmet diners, and transform abandoned industrial warehouses and workshops into eye-catching spaces for the arts. 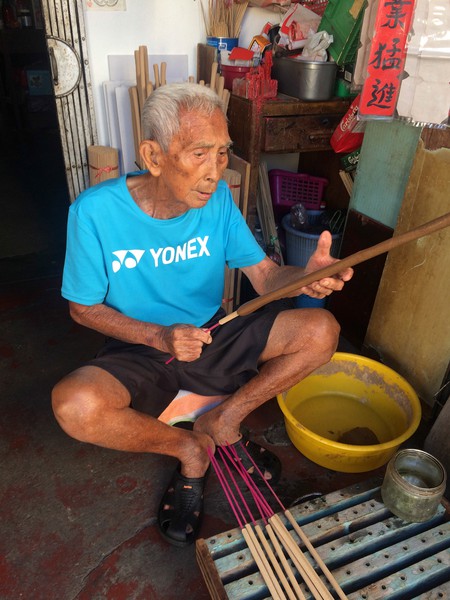 But UNESCO recognition also had an immense effect on the daily lives of George Town’s living heritage: the artisan craftsmen whose centuries-old skills were disappearing in the modern world of disposable consumerism. Lee Beng Chuang, who at 92 years old is acclaimed as the world’s oldest joss stick maker, admits to visitors with a smile that, “my life has certainly changed since UNESCO World Heritage. Before that I suppose I was anonymous, not speaking a word of English, only my native Hokkien dialect. Since then foreign tourists turn up here every day, and I even run lessons on how to make joss sticks helped by my English-speaking son”. Most importantly, the man everyone calls Uncle, has finally discovered relative financial security, even though he still sits out on his porch, balancing on a minuscule plastic stool, hand-rolling his unique incense seven hours a day, seven days a week. Pointing to a fading wedding photo, he insists, “I promised my late wife that I will never retire, and just stay working here every day till I come to my end”. 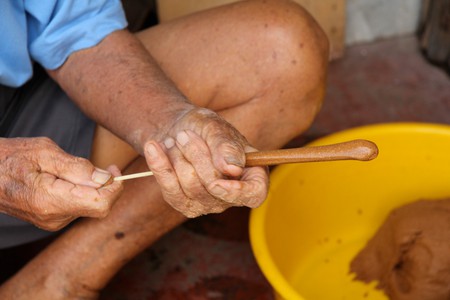 Uncle follows the same method of making joss sticks over and over throughout the day hypnotising onlookers who often stay on, mesmerised by this tolerant, zen artisan. Uncle’s father was a stevedore down at George Town’s docks but also ran a stand selling joss sticks outside Penang’s most famous Buddhist shrine, the Goddess of Mercy temple. As a boy, Uncle worked at the stall, but also became friends with the monks of the temple to learn the secrets of how joss sticks were made. Seventy years ago he perfected his own magic formula and opened this tiny back lane shop, living upstairs with his wife and five children. 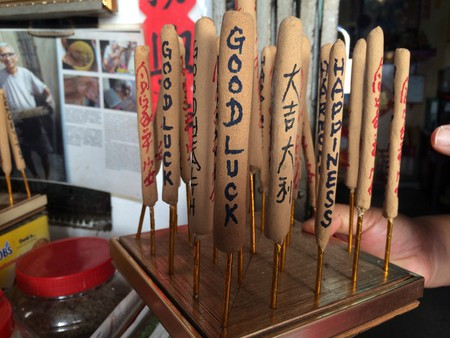 The whole process is quite simple. He begins by hand-mixing a dough with water, using perfumed sandalwood, sticky teja tree gum and wood powder from artemisia and agarwood, what he terms the ‘gunpowder of the recipe’. “I used to use industrial sawdust”, he explains, “but stopped a few years ago because I care about the environment and this was both unhealthy and polluting the atmosphere”. He then meticulously rolls and moulds each stick back and forth by hand, from 6 inches (15 centimeters) up to 3 feet (91 centimeters), and when the paste is perfectly fixed, hangs it up to dry in the bright sunlight for two days. For decades Uncle survived, if precariously, with regular Chinese customers. Since UNESCO recognition, a steady stream of heritage tourists make a pilgrimage to buy these unique joss sticks as souvenirs, especially the ones he decorates in delicate Chinese calligraphy with handwritten prayers and wishes. “I tell them,” he recounts, “that when they burn them at home it is as if they are sending the gods a speedy SMS text message”. 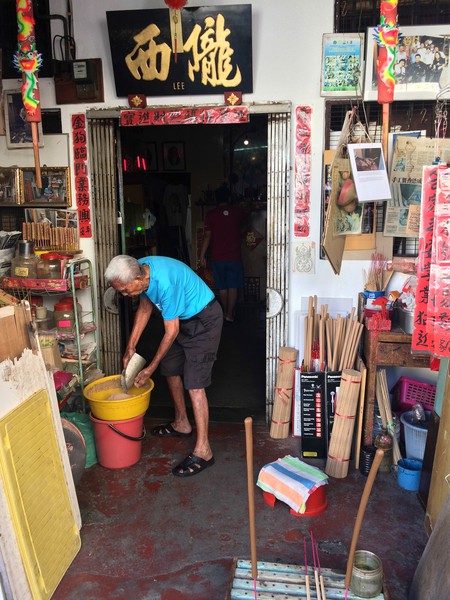 It is easy to forget when exploring what is one of the world’s last genuine Chinatowns, that Malaysia is very much a multi-ethnic nation, embracing the majority Malay population and a distinctive Indian community. Another living heritage craftsman, the proud hat maker Haja Mohideen is a Tamil Muslim, originally from Southern India. His workshop sits in a tiny alcove beneath the arches of the Nagore Mosque in the heart of George Town’s thriving Little India neighbourhood. He is the last craftsman hand-making a very particular kind of hat, the songkok, that has been an integral part of traditional dress for Malay and muslim men here for over 700 years.

He looks very sprightly for 72 years of age, especially working every day from 10am untill 9.30 at night, hunched behind his vintage pedal-powered treadle sewing machine. Peering through thick black spectacles he enjoys chatting with curious travellers that seek him out, recounting, “I first started work in 1962 when I was 14, right here where my father taught me everything. He took this space in 1936 when there were dozens of songkok makers in Penang. Now I am the last, but I am lucky that my son-in-law, Abdul Kader, wants to continue my work, and I have been teaching him for some ten years. He is still not ready yet to take over as it takes a very long time to master the skills of making the perfect songkok, and anyway, I am not even thinking of retiring yet.” 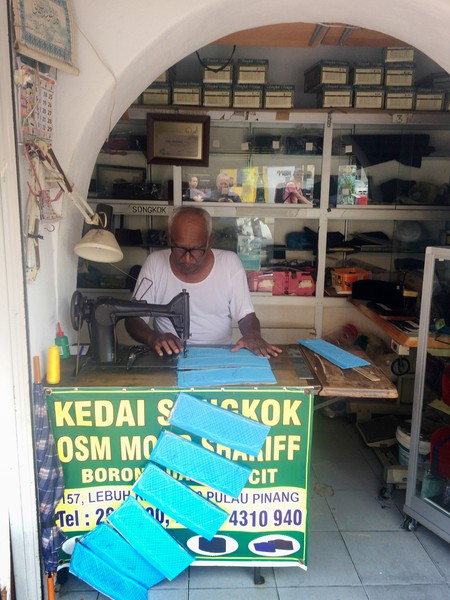 Quite incredibly, Mr Haja can make a songkok in just two hours. The customer tries different sizes until happy, and the master artisan then creates a frame for the hat from more than a dozen layers of old newspapers and recycled cardboard, which is then stitched together with cotton. He uses a knife to cut an oval shape for the top of the hat, and a longer, thinner section that wraps around to form the walls of the songkok. These two parts are then sewed together, ready to be covered in sober black velvet, while a second velvet covering is stitched onto the inside of the cap. “I deliberately keep prices low,” he explains, “M$30-35 for a custom-made songkok just to encourage people to wear them still. When I was a boy no muslim man would even leave the house without jauntily donning his songkok – it was as much a fashion statement as a religious duty. But today people tend to just wear the songkok for going to prayers at the mosque as well as ceremonies and celebrations at home. Certainly my busiest time is during Ramadan, when everyone seems to want a new songkok, with around 700 orders! These days I also do many smaller sizes, as it is obligatory for boys attending religious school to wear one.” 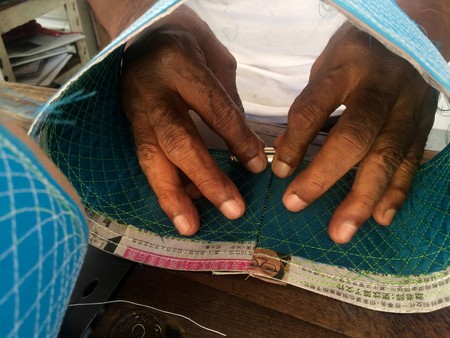 While Mr Haja tells a group of tourists that, “I’ve watched multiple generations of my customers grow up. Some of them are like family. How can I give this up?”. Local tour guide Joann Khaw adds that, “despite UNESCO recognition forcing rents up and pushing locals out, the positive side is that many ancient crafts and artisans that were going out of business have been saved and are flourishing today”. 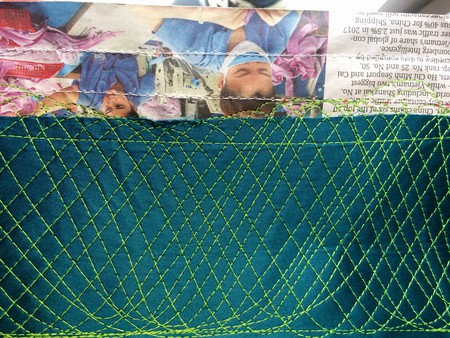