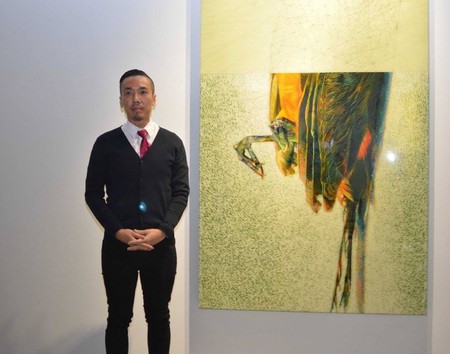 Many of the best contemporary artists in Malaysia offer something different and exotic, compared to other artists around the world. From artists who create traditional landscapes and depictions of former ways of life, to those who write Islamic calligraphy, here are ten Malaysian artists who are part of the nation’s cultural scene.

Born and raised in Kelantan in northeast Malaysia, Mohd Noor Mahmud is one of the most influential contemporary artists. With exhibits in galleries around Malaysia, including in Kuala Lumpur, Sabah and Sarawak, his characteristic styles cover the local culture and industry within his state. Focusing on contrasts and juxtapositions, Mohd’s work provides layers of meaning to the keen observer. The Siri Gua and the Colours of Kota Bahru are two of his most iconic series. He feels inspired by the beauty and rich culture of his home in Kelantan.

Ivan Lam quickly gained popularity in the 21st-century as one of the best contemporary artists in Malaysia. The artist, who works as a full-time college lecturer, produces modern realism. His pictures often tell a story, featuring mundane scenarios such as a car workshop or airport lounge. Ivan masterfully uses careful layers of paint and a combination of textures. With viewpoints from everyday life, this artist is quickly becoming known on the regional and international art scene. A recent exhibition called Panorama, hosted at Wei-Ling Gallery in Kuala Lumpur, attracted thousands of visitors.

Kedah-born Peter H.H. Lim creates a neo-conceptualist view of everyday life. Using a combination of paintings, installations and videos, along with performance, Peter creates conceptual art that often involves ordinary objects. Currently living in Rome and featuring in several Malaysian and international exhibitions, the Chinese Malaysian has a place among the best contemporary artists in Malaysia. Peter Lim’s The Beginning of Something solo exhibition at the Wei-Ling Contemporary in Kuala Lumpur was a huge success.

Caryn, a qualified medical doctor who followed her passion for art, uses pencil and watercolours to produce a range of artwork, including portraits. After attracting the attention of a Canadian freestyle artist, her face was immortalised and honoured by a large mural in Penang’s George Town. Caryn and two friends, Sliz and Aleff Ahmad, created A Nation’s Prayer, a tribute to the victims of MH370.

Susyilawati Sulaiman, often referred to by her nickname Shooshie, ranks as one of the best contemporary artists in Malaysia. Shooshie uses art in the form of drawings, paintings and installations to tell the story of Malaysia’s history and cultural identity. The little-known artist might not feature among famous names in the world of contemporary art, but her work hangs in galleries in both Japan and Singapore.

Once a graphic designer, before focusing his attention on fine art, Johor Bahru-born Ahmad has made a name for himself as a talented Malaysian artist. Using charcoal and oil paintings, he started his career with still images and portraits, before creating more contemporary styles. Ahmad’s other pieces have religious connotations, focusing on images, such as Hindu deities and Buddha. Gaining inspiration from the order of life and the world’s internal beauty, Ahmad has had a total of 16 solo exhibitions in Southeast Asia and the United States.

As a Malay Muslim from Perak, Husin Hourmain takes a contemporary twist on religious art in the form of elegant calligraphy. Husin, who identifies as an abstract expressionist, is often said to have influenced a new perspective on inscription and is quickly becoming one of Malaysia’s best artists. As Malaysia moves towards a more conservative form of Islam, Husin’s calligraphy has gained fans both at home and abroad.

The Selangor-born artist, often referred to as Jai, hosts several exhibitions in both private and public galleries around Malaysia and overseas. Most of his work depicts features from a traditional Malaysian lifestyle, such as the Kampong, as seen from his perspective and point of view. Taking inspiration from current and past events, along with elements of nostalgia, there’s little wonder why Jalaini Abu Hassan has been the recipient of multiple awards. The highly celebrated artist is one of Malaysia’s best, with exhibits both at home and around the world. The Bangsawan Kebangsaan, featuring in New York’s Tyler Rollins Fine Art Gallery was a huge hit. Jai’s work also stars in a permanent display at Kuala Lumpur’s Petronas Galley.

While not mainstream, S.C. Shekar ranks with the best contemporary artists in Malaysia for his photography. Starting as a photojournalist for one of the country’s leading newspapers, before following his passion for art, S.C. Shekar has travelled around Malaysia in search of images of landscapes, architecture and people. A recent exhibition entitled Grit and Grace is currently passing through art galleries around the country and celebrates Malaysia’s culture and heritage.

The final of the ten best contemporary artists in Malaysia is included for his unique approach to modern art. While most artists prefer a paintbrush or pencil, Kedah-born Haafiz Shahimi chooses wood and fire. He is a pioneer in Malaysia of a somewhat unheard of style of art called pyrography in which images are burned into a piece of wood. Using a range of materials to scorch faces, animals and a variety of other shapes into wood, Haafiz is an artist to look out for on the Malaysian art scene.