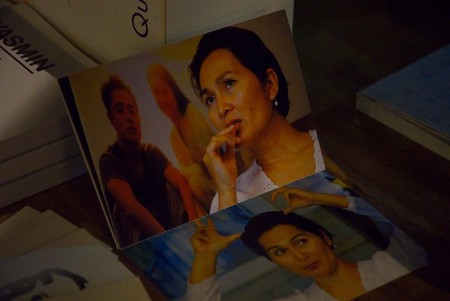 As a female Muslim filmmaker who took risks and always wore her heart on her sleeve, Yasmin Ahmad served as a pioneer in film whose legacy transformed the arts scene in Malaysia for the better.

There are few names as iconic to the modern cinematic landscape of Malaysia as Yasmin Ahmad (7 January, 1958 – 25 July, 2009). She wore many hats during her lifetime, working as a film director, writer, scriptwriter and an executive creative director at a local advertising agency.

People across the world remember Yasmin Ahmad for the indelible mark she left behind through her television commercials and films that have received international and local accolades. Her works were known to show a sense of heart and introspection that was rarely found in a local scene populated by superficial studio productions.

She was known to an international audience as part of an up-and-coming generation of Asian filmmakers that allowed their works to reflect upon the struggles and cultural diversity of their homeland. To Malaysians, she was a breath of fresh air and revolutionary who led the charge of producing challenging works that penetrated the mainstream.

As a filmmaker, Ahamad challenged audiences to tackle humanistic themes of hope, love and empathy in the face of breaking down social conventions. She was unafraid of tackling sensitive subjects as she tore down racial, religious and cultural barriers that stood between her and her vision. And, through it, she retained a sense of independence over her creative endeavours.

Ahmad was a controversial figure. She would often come toe-to-toe with local authorities who frowned upon her feature films, often demanding scenes be cut from to abide by cinema regulations and censorship laws. However, Ahmad found a workaround by releasing her films overseas to combat the heavy censors that would risk losing her personal vision.

One of her most notable films, Sepet, was a clear example of how controversial a figure Yasmin Ahmad was. The film revolved around the budding romance between a Malay girl and a Chinese boy, it drew enormous attention for its portrayal of interracial relationships and teenage angst.

Sepet painted a vision of multiculturalism against a backdrop of a society that was still unwelcoming and reeling from racial sensitivities that resulted in the idea of multi-racial relationships being taboo. Despite the censors, Sepet served as Malaysia’s powerful answer to Romeo and Juliet. The characters were two star-crossed lovers in a world that didn’t welcome them; it went on to win the Best Asian Film at the 18th Tokyo International Film Festival in 2005 and Best Film in the 27th Créteil International Women’s Film Festival in France in the same year.

Ahmad would go on to continue exploring similarly taboo themes throughout her career as an auteur, resulting in a series of films that became a mosaic of her vison of a better Malaysia. Her continued actions gained her a notoriety that allowed her films to transcend the limitations and stereotypical pitfalls of Malaysian mainstream cinema. Yasmin Ahmad allowed the world to have an unfettered view of the Malaysian experience, which was as refreshing to local audiences as it was groundbreaking in the international scene.

After her tragic death at 51, after suffering a stroke, the memory and spirit of Yasmin Ahmad continues to live on in the arts scene of Malaysia. Friends and family of the director have established a gallery in her name to house her works. It’s also home to art installations that have stemmed from her works, preserving her legacy for future generations to come.

Yasmin Ahmad stands as a testament to filmmakers everywhere to fight for one’s vision against those who try to silence art, and her message of love and acceptance will always burn bright in the hearts of those who have embraced her vision and seek to carry it forward.