How Boat Safaris Are Bringing Tourism to Borneo's Most Infamous Beach 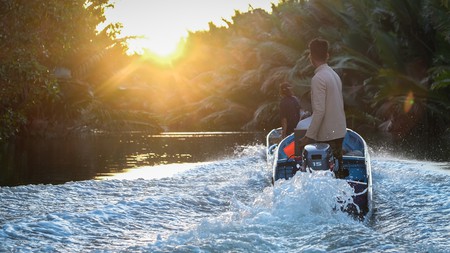 Culture Trip travels to the Malaysian state of Sabah in Borneo to meet Pak Haji, a man who built a community from scratch in the most unlikely of places.

We float silently, holding our breaths as our dinghies slide towards the edge of the bay. It’s right after sunset, and the ethereal glow of neon lights makes the rickety homes of Kampung Meruap look more menacing than they are. It’s because of the area’s reputation, set in front of the Sulu islands, an infamous nest of Islamist kidnappers and pirates.

In fact, this is not just another village. Perched on the edge of the Sungai Kapur reserve, an untamed Borneo wilderness that covers the easternmost crest of the Malaysian state of Sabah, Kampung Meruap was built here 40 years ago, single-handedly, by a sinner in exile. 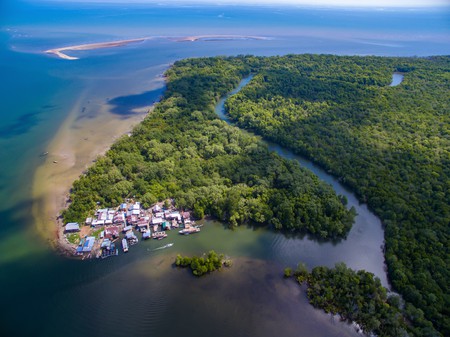 Kampung Meruap is perched on the last fringes of northeastern Borneo, directly facing the troubled waters of the Sulu Sea | © Simon Werren

“Welcome to my village,” he says. His name is Pak Haji, and he’s waiting for us on the veranda of the biggest wooden stilt house at the back of the village. He’s a small man, wrapped in a faded collared T-shirt and a dark sarong, with an eternal cigarette tucked into the right corner of his mouth. He certainly looks more humble than what he achieved, alone, on this forlorn beach.

The beginnings of Pak Haji’s community go back 40 years and took place under incredible circumstances. Back then, Pak Haji was living in Lahad Datu – the capital of the district of the same name, in the southeastern Dent peninsula of Sabah, only a couple of hours drive from Kampung Meruap – spending his time drinking and womanising. But one day, the townspeople decided they’d had enough of his behaviour, and gave him the boot. “You won’t continue making trouble here,” they said. “You have to go.” 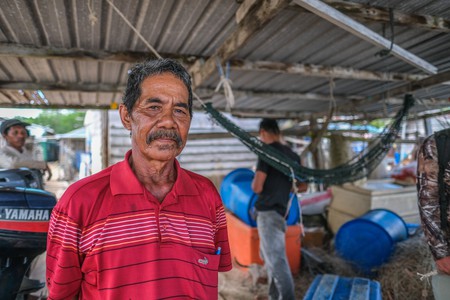 And so he did: armed with few possessions and accompanied by his former wife, Pak Haji started looking for a quiet place where he could stay away from vice and start a new life from scratch. One day he stumbled upon this forlorn beach, and knew he had found the perfect spot.

For four years, it was just Pak Haji, his wife and the sea. He drove every single nail of his wooden home, sweating off his sinful past, one hammer stroke at a time. Then, one day, a police boat lost its way and moored on the beach, and everything changed. Word got around, some families decided to move here from the city, and the first children were born. 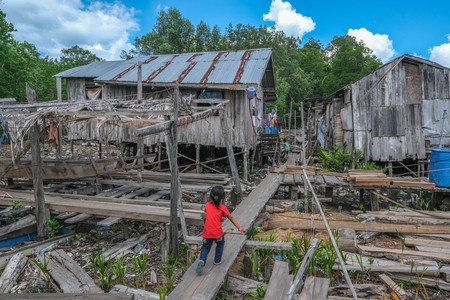 “We started bringing people to Kampung Meruap about a year ago,” says Simon Werren of Bikes and Tours, the company he runs with his Malaysian wife Itisha Ismail, and the tour which brought me to this forlorn village. Werren, who originally hails from Switzerland, lived in Lahad Datu for almost a decade, doing all he could to put this backwater North Borneo town on the tourist map. One of his most successful ventures is the tree planting project at Bukit Piton, a formerly degraded reserve that is home to around 300 orangutans.

When Werren started exploring Sungai Kapur, Pak Haji and the people of Kampung Meruap acted as his expert local guides. “There’s so much potential for untamed river and land exploration,” says Werren. But Kampung Meruap, and the lesser-known Sungai Kapur nature reserve, are not the easiest of places to draw tourism. The area thaws into the infamous Sulu Sea, one of the world’s most fleeting sea borders, better known as the home of the Sulu Sultanate — an Islamic separatist group, and a thorn in the side of both East Malaysia and the Philippines. 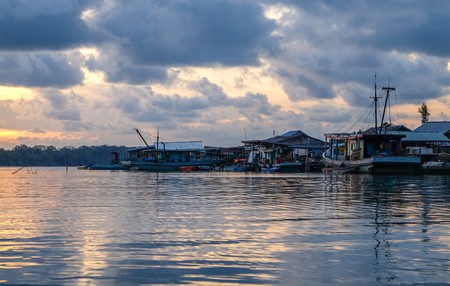 It was from southern Filipino islands that, in 2013, groups of armed Sulu rebels landed near Lahad Datu, occupying the village of Tanduo in what is now known as the Lahad Datu standoff. For a couple of weeks, the Malaysian army fought with these rebels, who some said used black magic to make their bodies bulletproof.

“You can imagine how hard it still is to shake that bad reputation off, but the area has been pretty much safe and stable for years,” explains Werren. “Our aim is to keep working with the local Sulu people of Kampung Meruap and change stereotypes,” he comments.

The village, a collection of rickety wooden and iron stilt homes sandwiched between a backdrop of lush jungle and the sea, is only accessible by boat. The people living here are a mix of Sulu-Malaysians, Filipinos and stateless fishing folk who have more pressing matters than thinking about what nation-state they belong to, such as finding fish to eat or sell to the markets of nearby towns to support their livelihoods. 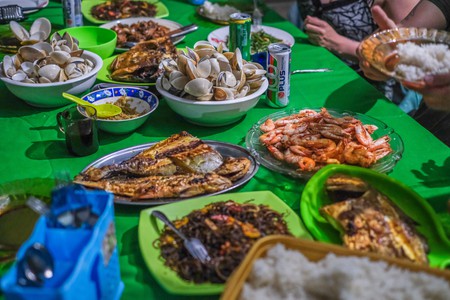 “I am a Filipino,” says Awang, my river guide. He was born and raised in the village, which is in Sabah, so on paper, this makes him a Malaysian. “But I am Sulu,” he shrugs.

Together with another 50-odd people young and old, Awang lives in Kampung Meruap under the guidance of Pak Haji. Before Bikes and Tours started bringing the first tourists in, they all lived a life dictated by the seasonal movements of fish and shrimp, the swelling of tides and the cost of the gasoline needed to move their boats around Sungai Kapur’s dense network of canals. But as the village keeps growing, and little children start showing up on the rickety jetties, playing and screaming loudly as soon as they see one of us foreigners, the question is whether or not remaining at the edge of modernity may be the best choice for this village. 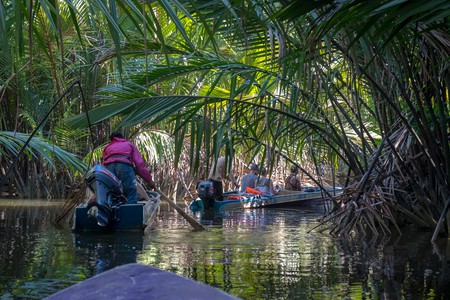 The local Sulu people are expert guides, effortlessly leading travellers through the maze of water and bamboo | © Kit Yeng Chan

The new tours bring people into the reserve for two nights and three days, the best part of which is spent trawling the canals of Sungai Kapur on small long-tail boats managed by the locals of Kampung Meruap. It’s a full immersion into mangrove forest inhabited by wild elephants, crocodiles, giant flying foxes and orangutans. During these boat safaris, guests visit Kampung Meruap to understand the life of the river guides and their families, and try delicious Sulu seafood served fresh off the nearby crashing waves. If managed properly, the new trickle of tourism may offer new ways to generate income, in the hope of giving a better education to the next generation.

“Maybe the tourists will give our children a good example, convincing them that there’s another set of different opportunities waiting for them outside of the village, and making them interested in studying,” says Pak Haji. But as he talks, he keeps his eyes fixed on the sea. It crashes on the beach, like it always has. For almost half a century, the Sulu Sea has been Pak Haji’s main source of livelihood and his best friend. And even now, the old man believes, the sea should know the answer to what lies ahead for all of them. 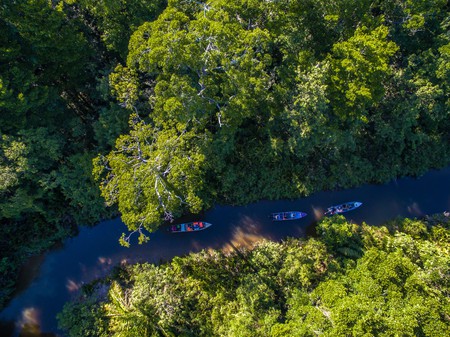 Bike and Tours organises boat explorations of Sungai Kapur, a primary mangrove rainforest that until now has seen very few visitors | © Simon Werren
Give us feedback