Borneo Food: Top Dishes to Try When You Visit 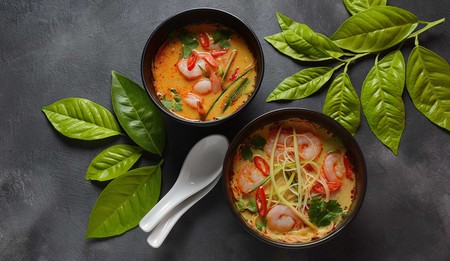 The South-East Asian island of Borneo is split among three countries – the Indonesian region of Kalimantan in the south, the Malaysian states of Sabah and Sarawak in the north, and the tiny state of Brunei, which is divided into two non-contiguous parts on the north coast. Its cultural diversity is reflected in its cuisine, which varies significantly from region to region and features an eclectic mix of historical influences, techniques and flavour combinations. Trying the local delicacies is an essential part of visiting Borneo, just as much as exploring its wild, biodiverse landscapes. To give you a taste of what to expect, we’ve picked out the best dishes to try in Borneo.

Ubiquitous across much of Southeast Asia, this intensely flavoursome dish consists of a spicy coconut milk broth – typically infused with chillies, shrimp paste, lemongrass and coriander – rice vermicelli noodles, beansprouts and either chicken, fish, or prawns. In Borneo, Laksa is especially popular in the Malaysian states of Sabah and Sarawak and is eaten for breakfast, lunch or dinner. You’ll find many variations, such as Sarawak’s version which comes with omelette strips on top – but the core ingredients are generally the same. 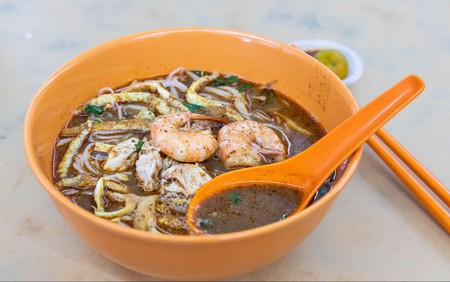 In Kalimantan – the Indonesian portion of Borneo – you’re much more likely to see Soto Banjar on the menu than Laksa. It’s also a fresh, aromatic noodle soup – usually served with chicken – but the broth is clear and doesn’t contain coconut milk. Lime leaves, chillies, ginger, garlic, lemongrass, cinnamon and cloves provide the flavour and it’s often bulked up with potato patties, rice cakes and half-boiled eggs. The city of Banjarmasin – on the south coast of Borneo – is one of the best places to try it.

A staple of the Kadazan-Dusun people – the largest indigenous group in Sabah – Linopot is rice which is tightly packed and wrapped inside a leaf, usually of the Doringin or Tarap plant. The leaf absorbs excess moisture to keep the rice fresh for longer and also gives it an added fragrance. Occasionally, the rice is mixed with mashed yam or sweet potatoes during cooking, resulting in a thicker texture and darker colour. The Linopot forms the focal point of a Kadazan-Dusun meal and tends to be eaten alongside various traditional fish and vegetable dishes. 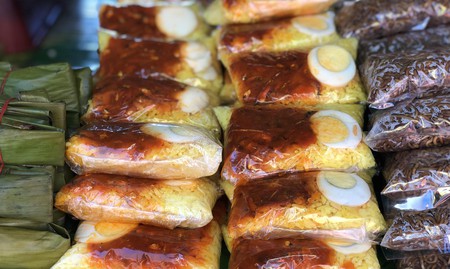 Another traditional dish of the Kadazan-Dusun people in Sabah, Hinava is made by marinating fish – usually mackerel – in lime juice for around 20 minutes, combining it with ginger, chillies, chopped shallots and bitter gourd, before serving it chilled or at room temperature, either as a starter or as a main dish. If you like ceviche – the South American equivalent – you’ll almost certainly enjoy Hinava. Although typically eaten during the annual harvest festival towards the end of May, you can also find it in certain Sabah restaurants throughout the year.

Rivalling Hinava as one of the most popular Kadazan-Dusun fish delicacies, Pinasakan is based around Ikan Basung – an oily fish, similar to sardines, which is commonly found in the waters off the coast of Sabah. The fish is slowly braised in a pot at a low heat, with turmeric, ginger, chillies, lemongrass and slices of asam keping – a sour fruit, commonly used in Malaysian cuisine. It can be kept for up to two weeks without going off and makes an excellent accompaniment to Linopot.

If Sarawak is on your Borneo itinerary, expect to come across Manok Pansoh – chicken chopped into small pieces and grilled over an open fire in a bamboo stalk, covered with tapioca leaves and flavoured with ginger, lemongrass, garlic and turmeric. The balance of spices and seasoning varies between different communities, but it’s invariably delicious. 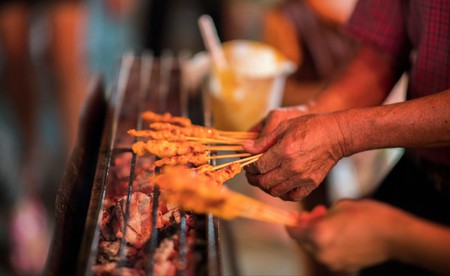 Ambuyat is the national dish of Brunei – and features as a standard part of any meal in this minuscule country in northern Borneo. Derived from the starchy interior of the sago palm tree, it’s a white, gluey substance, eaten with bamboo utensils called candas – similar to chopsticks, but joined together at one end. It doesn’t have much flavour itself, but serves as a satisfying base to be dipped in cacah – a spicy, sour sauce, usually made with shrimp, lime juice and chillies. 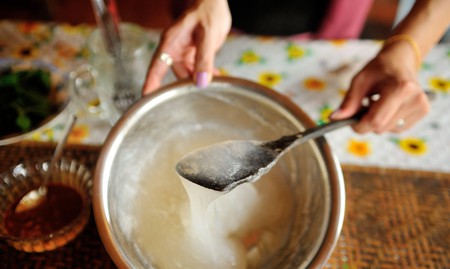 While not unique to Borneo, Nasi Lemak is one of the most treasured dishes in Malaysian cuisine and can be found in restaurants and street markets in Sabah and Sarawak – as well as in Brunei. The central ingredient is rice, cooked with coconut milk and pandan leaves – which impart a subtle, vanilla-like flavour – served alongside fried peanuts, hard-boiled eggs, crispy anchovies, sambal and, often, fried chicken or beef rendang. Nasi Goreng – made with fried rice instead of coconut milk rice – is also well worth a try. 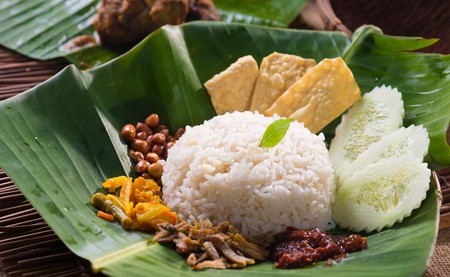