7 Famous Architectural Landmarks in Kuala Lumpur You Should Visit

Not only just a pretty sight, the monuments that decorate the skyline and postcards of Kuala Lumpur have their own slice of profound history, which is rooted in their construction. We have researched the beauty behind these landmarks and compiled them into a little list. Keep these fun facts in mind the next time you visit and surprise your fellow sightseers with your in-the know tips. 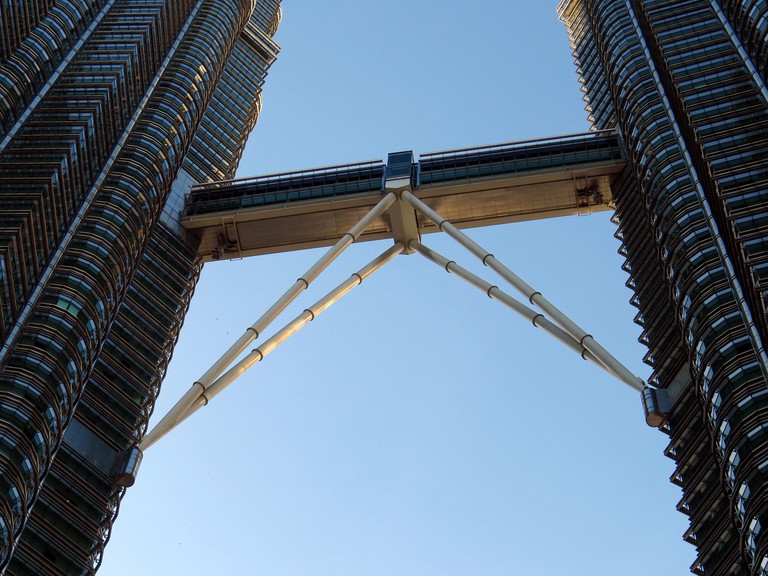 The Sky Bridge of the Petronas Twin Towers | (c)David Berkowitz / Flickrhttps://www.flickr.com/photos/davidberkowitz/9048800175/in/photolist-eMBt38-nD3kLg-9g53iL-rp91YL-b9BM4H-fCdwA5-o93MsN-o93NcJ-nD2Rcq-rrqWtB-pyYNWo-56kKcQ-7JBYMN-4VPKkY-AXzPZ-5JrDvP-7Z41rp-gf9LkM-7QidiW-76vdGi-bqJwTW-bqJxhN-5JrEjB-2bzorC-bDDsCr-bqJwPG-fLF57-bDDtCa-ivK4M8-aJG7ra-3eVt8u-82xTNo-rdVyx6-eMBDr2-bqLGpz-82xTN5-bvyFeb-eMBp6i-e3Km4S-96ambX-bDDsG2-nAPwEZ-eMNuPS-662399-eMAYJK-7e99PL-5JvSxY-65WQhX-76ngbY-2t4dy>
Book Now
The most recognizable symbolic landmark of Malaysia, the Petronas Twin Towers stand as the beacon of modern urbanization of Kuala Lumpur. The 88-storey twin toppers hold the title for 12th tallest skyscrapers in the world, and to date are the only twin towers to do so, making them number one in that category. The iconic Skybridge that links the two together acts as a tendon of sorts, keeping the sisters from swaying too much during high winds. The towers were constructed during the administration of the fourth Prime Minister of Malaysia, Dr Mahathir Mohamad, who set the building of each tower as a competition between the constructors from Korea and Japan. The Koreans won, finishing both their part and the Skybridge a week earlier. Like most other notable buildings, the towers sport a prominent Islamic influence; their bases are shaped to be of eight-pointed stars.
Open In Google Maps
Concourse Level Kuala Lumpur City Centre Kuala Lumpur, Wilayah Persekutuan Kuala Lumpur, 50088, Malaysia
+60323318080
Visit Website
Give us feedback

Not to be thought as a second to the twins, Menara Kuala Lumpur holds its own pride as the seventh-tallest free-standing tower and the seventh-tallest communication minaret in the world, a superstructure that is also another immediate signature feature of Malaysia. The second-tallest tower in Asia, it enjoyed some fame as a featured landmark in Amazing Race Asia 1 as a pit-stop and marker. More than just a pretty structure, the KL Tower also serves as an Islamic falak observatory to time festivals by the crescent moon sightings. Its notable dome holds Iranian design influence and hosts Atmosphere 360, a rotating elevated restaurant above its public observatory deck. During certain times of the year, a race up its 2,058 steps is held, with the winner earning cash prizes. 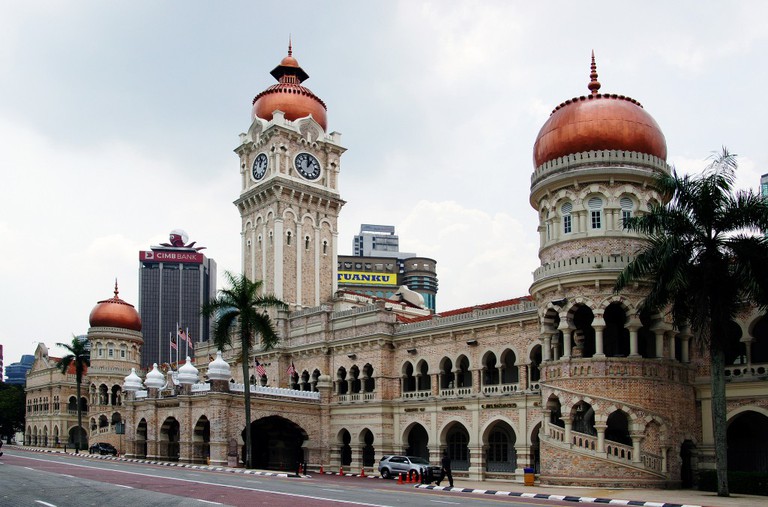 Sultan Abdul Samad Building | © Bernard Spragg/ Flickr
A relic from the 20th century British-run colonial era of Malaysia, this government offices-turned Ministry of Information, Communications and Culture overlooks the very field where Malaysia declared independence as a country in 1957. Combining influences from dominant British colonial planning and Islamic influence, this building boasts the unique statement of neo-Mughal architecture. If you are lucky enough to be in the area during Malaysia’s independence day (August 31) head to the Padang to spectate a tonne of celebrations and parades in honour of Malaysia’s history.
Open In Google Maps
Kuala Lumpur City Centre Kuala Lumpur, Federal Territory of Kuala Lumpur, 50050, Malaysia
Give us feedback

While considered by some to be an overcompensating monolith, Kuala Lumpur’s international airport – abbreviated as KLIA – remains top-ranked among all the airports of the world. A major station in Southeast Asia, KLIA has the world’s 23rd-busiest airport transit traffic. It replaced the former Sultan Abdul Aziz Shah Airport, and is near to the high-tech headquarters of the nation’s Multimedia Super Corridor (MSC) development project, which is designed to attract global businesses through tax breaks and proximity to the airport. Being the first thing most tourists see when they touch down, this airport also sports Islamic-influenced domes and star-like lights in its wooden ceilings. 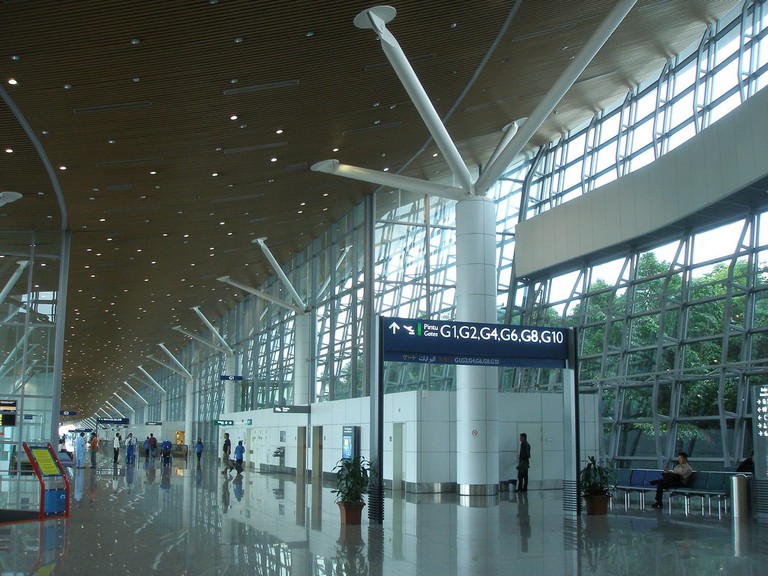 The largest religious devotion of Hinduism in Malaysia, and the second largest Hindu deity statue in the world, the golden towering effigy of Lord Murugan, God of War marks the starting point of the steps leading to the Batu Cave Temple. While the main objective of the trip is for the cave, this statue is popular for being an attraction to many devout visitors, the most of which you can see during Thaipusam, a Hindu festival celebrating Lord Murugan’s birthday and the bestowing of the celestial spear he carries. 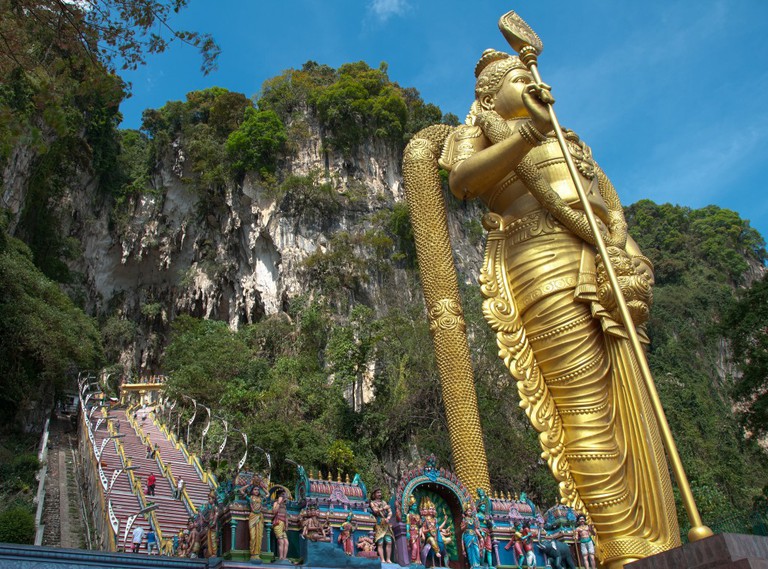 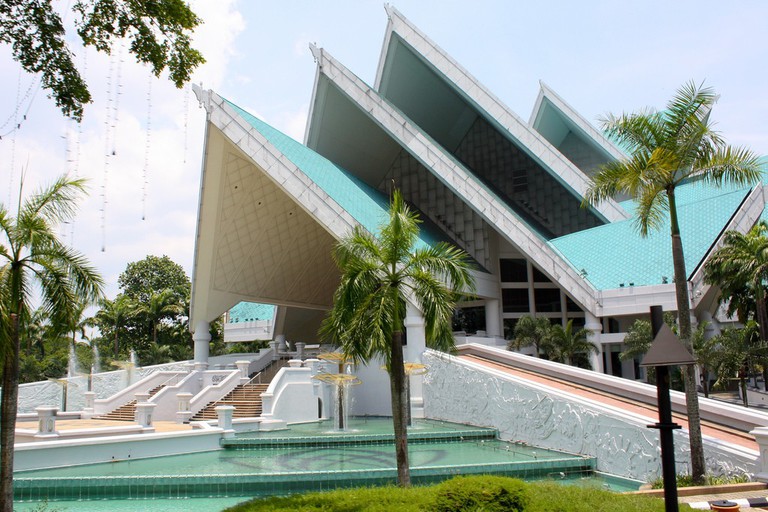 Istana Budaya | © Andy Mitchell / Flickr
A home to Malaysia’s cultural arts and theater, Istana Budaya is formed in accordance with the edges of a Kelantanese Kite, the moon wau. Also deriving aspects of ‘sirih junjuung‘, a Malay ceremonial dish for weddings and welcome, the palace takes on an origami-like feature almost similar to the Sydney Opera House. True to be steeped in Malaysian culture, the building is sectioned like a typical kampung village house, with areas of stage named after and representing functions of a living quarter. With all the furnishings of a world-class opera stage, Istana Budaya has been the venue host of numerous philharmonic and theatrical performances to this day.
Open In Google Maps
Jalan Tun Razak, Titiwangsa Kuala Lumpur, Wilayah Persekutuan Kuala Lumpur, 50694, Malaysia
+60340265555
Visit Website
Give us feedback

Book Now
With countless heritage buildings and locations demonstrating the Islamic-influenced design, you cannot leave out the ultimate Islamic monument of all, the National Mosque. Inspired by the parasols that always accompany royalty, the mosque’s iconic and unconventional dome resembles more of a 16-point paper umbrella instead of the traditional smooth, rounded dome. Even the minarets around it look like folded umbrellas, signifying strength and unity of family. The mosque is not only a place of worship for Muslims, but is also a place where visitors of other faiths can come and enrich their knowledge about the national religion of Islam. Constructed entirely out of concrete back in the 1960s by the country’s multiracial people, the mosque remains a shining symbol of unity for all. Please be prepared to take off your shoes, and don’t wear shorts and hats when visiting.
Open In Google Maps
Jalan Perdana, Tasik Perdana Kuala Lumpur, Wilayah Persekutuan Kuala Lumpur, 50480, Malaysia
+60321073100
Visit Website
Give us feedback
Give us feedback