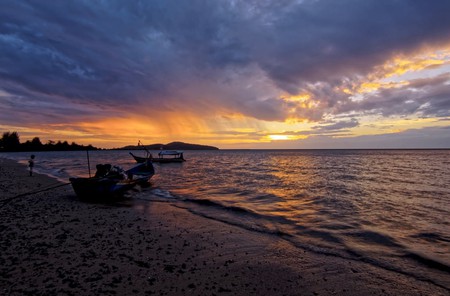 Langkawi, the Jewel of Kedah, encompasses sandy beaches, protected rainforests and crystal-clear waters. It’s a wonderful paradise island that should be your next holiday getaway. Here are some amazing photos of Langkawi that prove its beauty. 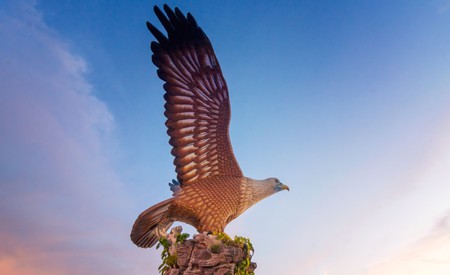 The large eagle statue welcomes you at the Eagle Square as you approach Langkawi by ferry, with a backdrop of sea and mountains. The wise and courageous eagle is the symbol of Langkawi. 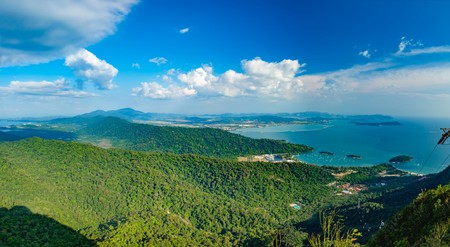 Enjoy panoramic views of the Langkawi islands surrounded by turquoise water as you take the cable car up Mount Mat Cincang, where the Sky Bridge is located. 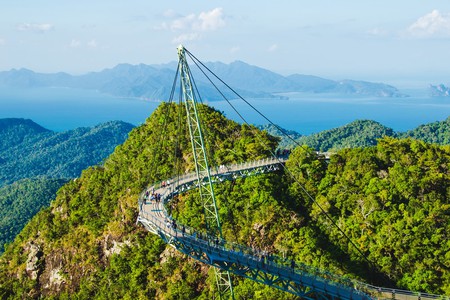 Your cable ride ends at the Sky Bridge. Walk along the sturdy bridge and enjoy the breathtaking view of mountains, islands, and sea in Langkawi. 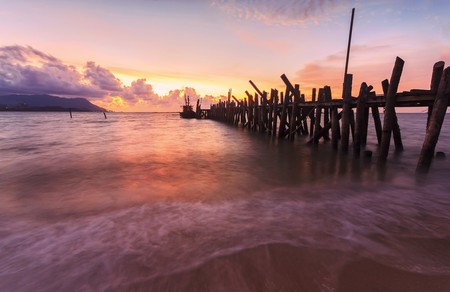 As the name suggests, Black Sand Beach has beautiful black sand to walk along. 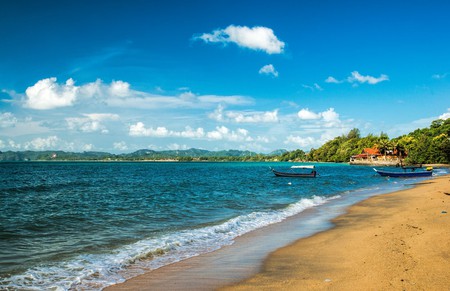 Black Sand Beach is an old fishing village. Watch the fishermen take their boats out to sea and bring in their fresh catches. 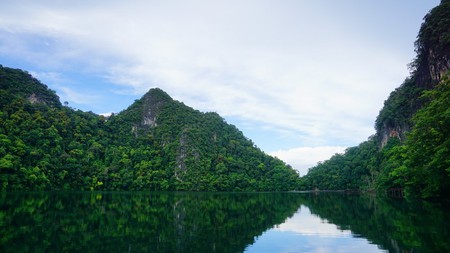 Island hopping is a must when visiting Langkawi. Dayang Bunting Island, known as the Pregnant Maiden Island, has a beautiful fresh water lake surrounded by rainforest. Folk legend says that a royal couple who lost their son laid him to rest in the lake, and thus blessing women with fertility after they take a dip in the lake. 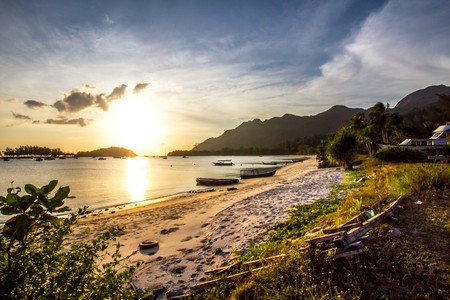 Teluk Kok has a beautiful bay with limestone hills and green jungle. 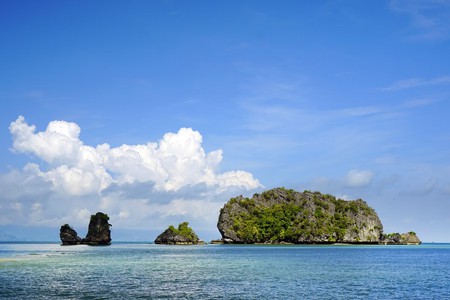 Don’t miss the picturesque views of islands floating in the turquoise waters from Tanjung Rhu beach. When the tides are low, walk along the sandy shores to get up-close views of Cabang Island. 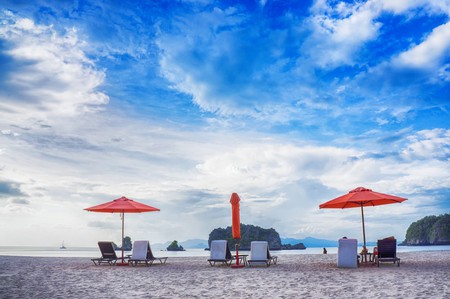 Sitting on the beach chairs at Tanjung Rhu Beach | © masuti/Shutterstock

Sit back and relax on the beach chairs at Tanjung Rhu beach, and take a swim in the sea. 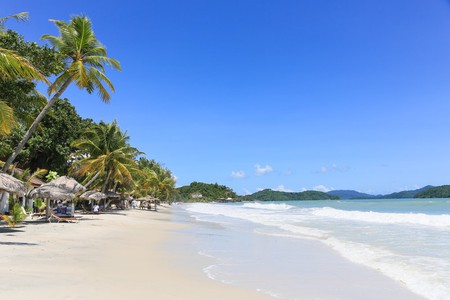 Cenang Beach with its gentle curve of sandy beach | © AsiaTravel/Shutterstock

Cenang Beach is a long, gentle curve of sand lapped by pristine water. 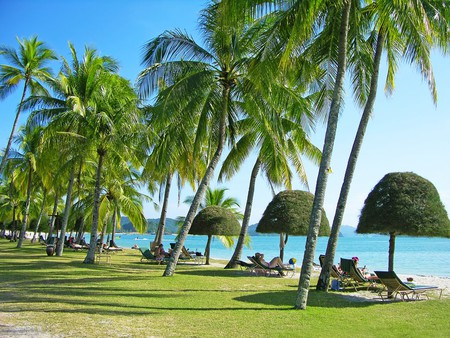 The lounging chairs at hotels along Cenang Beach put you in relaxation mode. 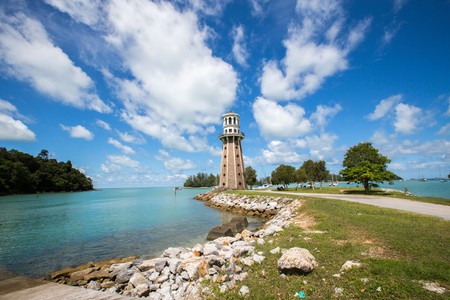 Located on the rocky coast of Burau Bay Beach, the Teluk Burau Lighthouse looks out across the sea. Watching the sun go down behind the lighthouse is a peaceful sight. 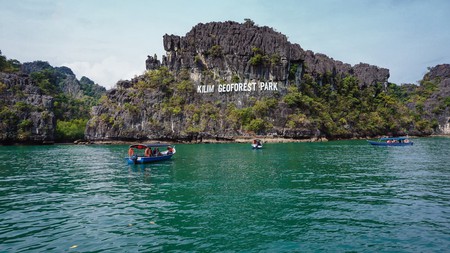 Take a boat to one of Malaysia’s UNESCO’s World Heritage sites. KILIM Geoforest Park has limestone formations, mangroves, wildlife, and birds. The park has taken care to preserve the natural eco-system. 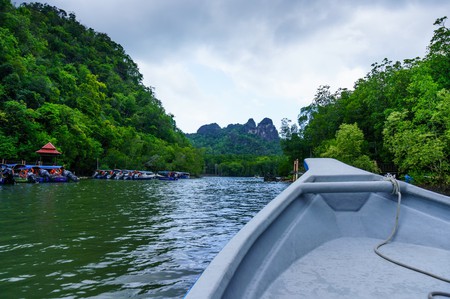 The boat takes visitors inside the KILIM Geoforest Park, through the mangroves and rainforest. It is a peaceful ride as you enter into the wonder of Langkawi’s nature. 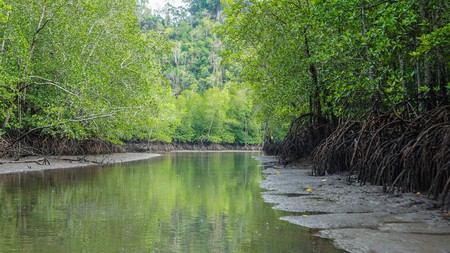 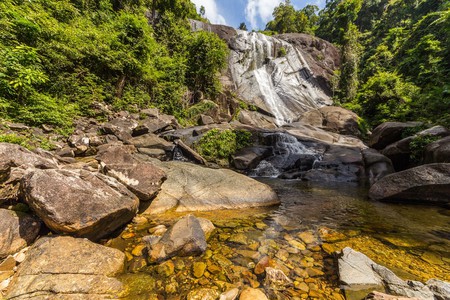 The 91 meter waterfall and lower pool welcomes you after a long walk along steep trails. Trek further up through the rainforest of Mount Mat Cincang to reach to the top of the waterfall. 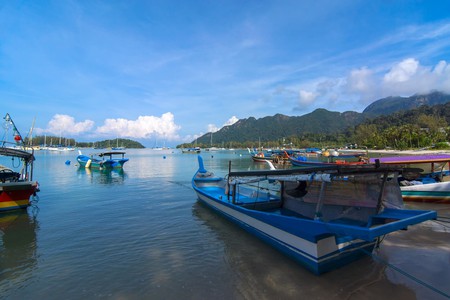 Fishing boats anchored at the bays of Langkawi | © BroNrw/Shutterstock

Fishermen anchor their traditional boats in the bay of Langkawi. 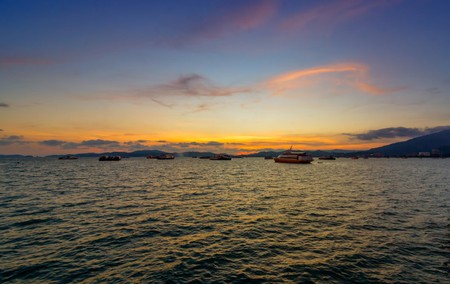 Watch a peaceful sunset over the sea, and watch the fishermen return with their catch. 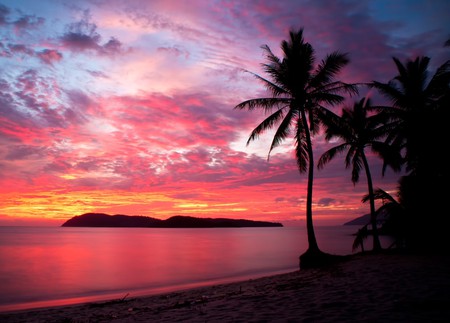