10 Reasons Why You Should Visit Penang Over Kuala Lumpur 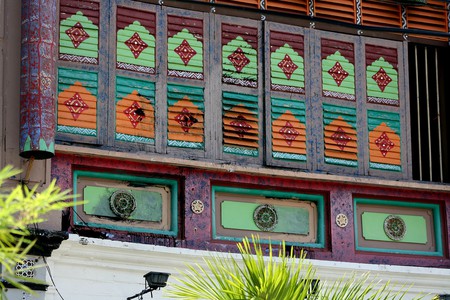 Dubbed the ‘Pearl of the Orient’, Penang is mostly known as a state island on the west coast of Peninsular Malaysia in the northern region. Hailed as one of the places you absolutely must visit before you die, here’s why travelers should escape the hectic life of the urban city of Kuala Lumpur and instead head for Penang.

Penang is explicitly known for having the best food in Malaysia; anyone who says otherwise clearly hasn’t been around much. Providing the most conclusive flavors of Asia, feast practically non-stop on delicacies such as the mamak Mee Jawa, the most popular char kuey teow, delectable desserts such as muah chi (rice cakes covered in peanut brittle), tau sar peah biscuits; and beloved white curry mee. Stop by famous places like Gurney Drive outdoor food court for local hawker cuisine, or kooky alleyway restaurant Line Clear for the best nasi kandar in the state. With the huge South Indian Muslim population making up a large mamak community, longtime Aceh Sumatran influences, Thai integration from the north and of course local tastes, the evolution of food on this island is truly like no other. 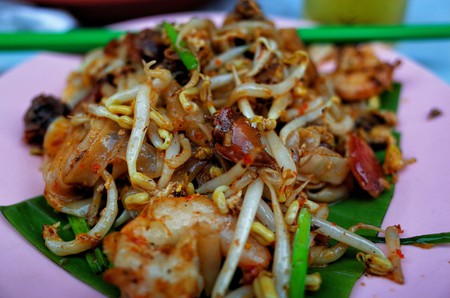 Penang is especially full of history, being home to mansions, churches, cemeteries and shop lots from many different cultures over the centuries. Be surprised to know that quite a few of these historical sites are still in active use, having been repurposed or still running since the time of their erection. Declared a UNESCO world cultural heritage site, many Chinese clan houses now double up as temples or are refurbished to become boutique hotels, a particularly notable one being the Cheong Fatt Tze mansion. Remnants of the British administration are plentiful, and Fort Cornwallis happens to be the largest preserved fort in all of Malaysia. 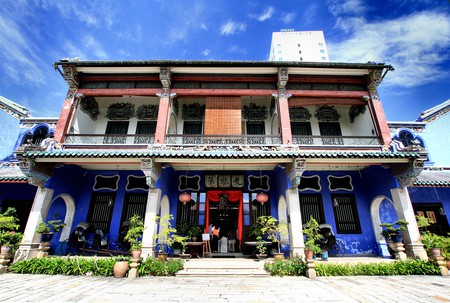 By no means the only great event where local and international talents come together in Penang; but one that celebrates the love for reading, the Georgetown Literary Festival is an annual gathering of artists to revel in and showcase new and old talents. One of the most beloved indie scenes appreciating arts and literature in the country, expect to find gems away from the hype spotlight and bunker down with true lovers of the poetic expressions via words and music. Many of the festival’s attendees are collectors of the fine arts themselves so look out for interesting relics and keepsakes; some of which are possibly artifacts of the Nyonya history, ancient Kristang language and rare editions of international classics. The festival is held every November, so plan a trip around this time to catch the event in action. 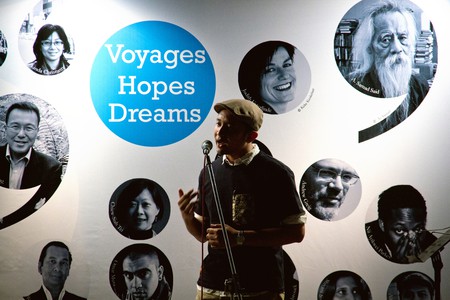 Where the hills meet the ocean

From a hike up Penang Hill to the sandy shores of Monkey Beach, this island is one of the very few places in Malaysia to offer both green and water activities. Penang’s National Park may be the smallest in all of the country, but its twisting terrain climbing up a mountain and veering off into secluded beaches puts it in the running for the most interesting. And with an adventure park in the mix, there is always something exciting awaiting at every bend. 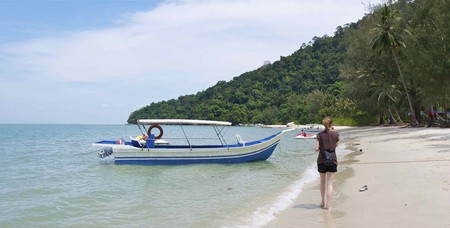 Many inhabitants of Penang are of the older generation, among which have seen the Japanese occupation in the 1940s as children, or who have been born shortly after. As such, Penang is also known as a place remaining on the more traditional way of life as opposed to the fast paced development of most high-density cities. Preserving the old way of doing things, as evident by the abundance of hawker stalls and markets, the people of Penang island generally stick to the simpler, more familiar way of operating amid the burgeoning push of modernization around it. Visiting certain parts of Penang, especially areas surrounding heritage sites will be like a step back in time. 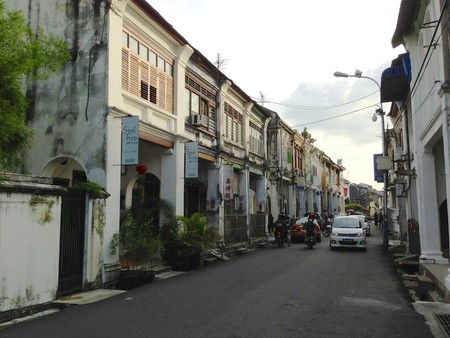 With increasingly lucrative ventures into the budget adventure industry, Penang which has had a longtime title of one of the best holiday destinations in Asia, has been accommodating newer forms of housing getaway needs. Many boutique hotels and cafes have been springing up all over town to cater for and attract the newest generations of vacationers while still maintaining its old-time characteristics. Establishments like the 1962 Heritage Hotel, repurposed from old colonial homes; or the more modern Tune Hotel provide a great range of options for patrons of different tastes seeking either more homely or basic living amenities. 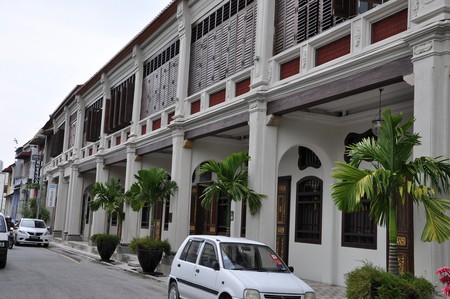 Penang being a place of tradition and heritage is chock full of buildings from at least a century ago, since its development by British administration and Asian settlement. Colonial buildings as well as Chinese and Indian ornate houses and shop lots still stand proudly around the island. And to the south of the island, Malay settlements are abundant, a true ‘kampung’ village community. In addition to the most elaborate temples such as the Snake Temple and Thaipusam chalk-marked roads, relics like the clock tower in the city square and local monuments like the famous KOMTAR all give a very interesting man-made landscape. 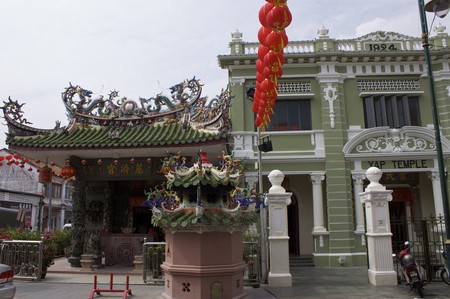 One of a kind language

One thing Penang has that is definitely unique to its area and community is the type of language they speak. If you have any ear for the Chinese Hokkien dialect, the Penang Hokkien way of speaking is bound to throw you off. Having incorporated bits of the Malay language into its regular vocabulary, no other part of Malaysia speaks anything quite like this. Unfortunately this particular dialect faces dying out, as the current generations choose to speak the more universal Mandarin dialect, leaving their grandparents to converse only amongst the increasingly rare other native speakers. Luckily, efforts to preserve this language have been underway, and it is possibly so far the only Hokkien dialect to be encompassed in a helpful language dictionary.

A lover of street art would have definitely seen some images of Penang’s beautiful street art circulating the web before. A collective of passion projects by international and local urban artists, life in Penang is captured through beautiful graffiti paintings of its people and animals. A series of metal structures have also been integrated into an interactive tourism map of the capital city of Georgetown, encouraging visitors to scour the city in search of the next marker usually around other great landmarks. 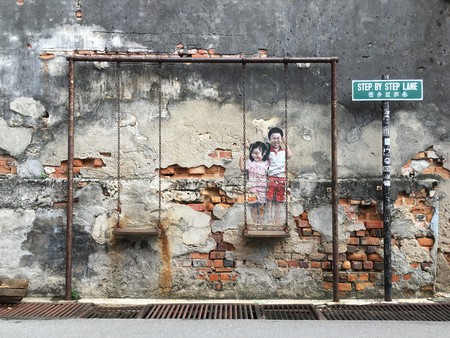 Unlike Kuala Lumpur, where a constant flow of newcomers contribute to its dazzling multiculturalism, Penang’s multiculturalism has been developed over many generations spanning back to when Malaysia was Malaya and an important midway trading point for ships traversing the route from West to East and vice versa. Mixed marriages were abundant, creating new races such as the northern Peranakan, Burmese-mix, Arab-Chinese, and Eurasian whom were the result of inevitable White and Asian procreation. In addition to its proximity to the powerful Thailand, Penang became the most conductive area of lower Asia, celebrating festivals such as Songkran naturally. Proof of such diverse multi-racial households can be found in the names of the roads all over Penang, and the existence of the only Jewish cemetery in Malaysia still well kept by the living descendants. 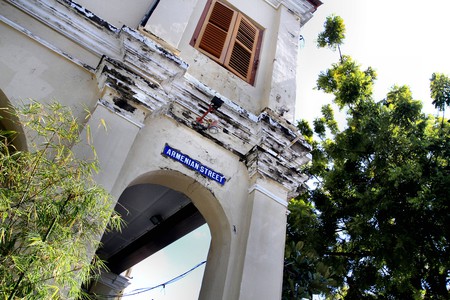