10 Epic Places in Malaysia Even Locals Don't Know About

Cemetery in Georgetown, Penang | © Jiří 伊日 / Flickr <https://www.flickr.com/photos/92903415@N05/10755635745/>
Despite the hot weather and often isolated monuments, it is always worthwhile to make the effort to go out and explore the amazing natural and man-made formations all around Malaysia. Here, Culture Trip are excited to list some of the best places to go that have yet to be swamped with tourists.

Known as one of the best diving spots in the world, the Sipadan Islands have a lot to offer for off-shore and underwater activities. While this may make it a specific target for ocean enthusiasts, there is still fun to be had for non-scuba divers. Revel in the quietness of the sandy beaches and little forest on the island where wild birds and other wildlife live undisturbed by human influence. The nearby islands offer a little more connection to civilization, with budget plans often leading visitors to the larger land of Semporna, where life remains a quiet occurrence without hordes of travelers passing through. 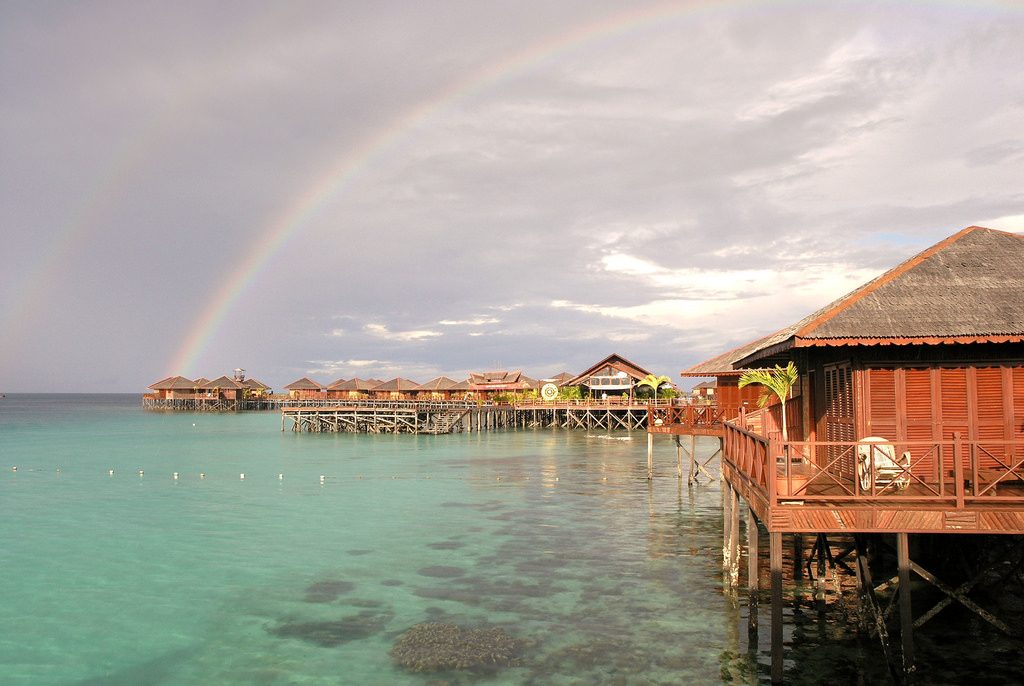 This small but beautiful waterfall is hidden away on the hills of Hulu Langat, a little way off Gunung Nuang. It takes a small road trip to get here from Kuala Lumpur, and the sights of quaint Malay villages along the way are sure to delight those who appreciate watching life slow down from the hectic city to the more relaxed countryside. Lepoh Falls are known for the cool mountain water running down its tiers, two of which form an amazing natural water slide into a refreshing pool surrounded by lush greenery, through which a two-hour hike is required to reach. Visitors to the falls mostly consist of the people living around it and the occasional group; so its advisable to go a little early to get the best picnic spots. Also, remember to clean up after yourselves as the waterfall is a free area and therefore doesn’t have official caretakers. 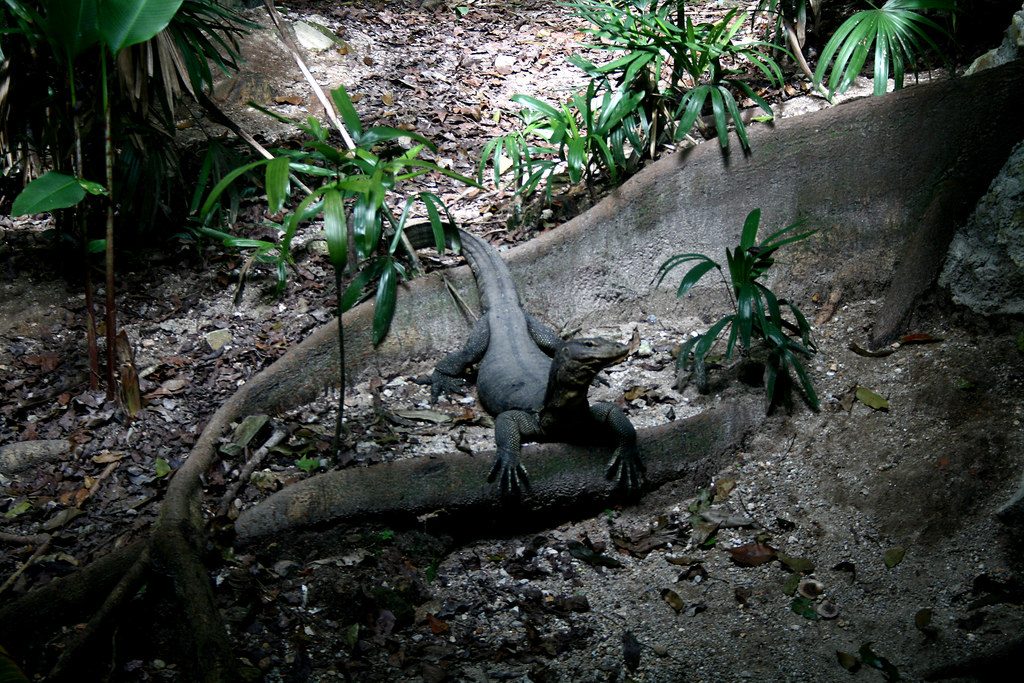 Full of old ruins deep in its thick jungle, Pulau Jerejak has a notorious history among the people of Penang for being an island full of unpleasant occurrences. During its heyday of attempted utilization by British administrators, Pulau Jerejak has been home to leprosy and tuberculosis stricken patients, a ceremonial resting ground for navy soldiers lost to the Indian Sea, a quarantine site, and most recently – until 1993 – a jail. A resort and spa now occupies the place, but remains in low traffic due to its controversial past. Great for explorers and lovers of nature reclaiming man-made structures, this island holds many secrets for those brave enough to explore it. 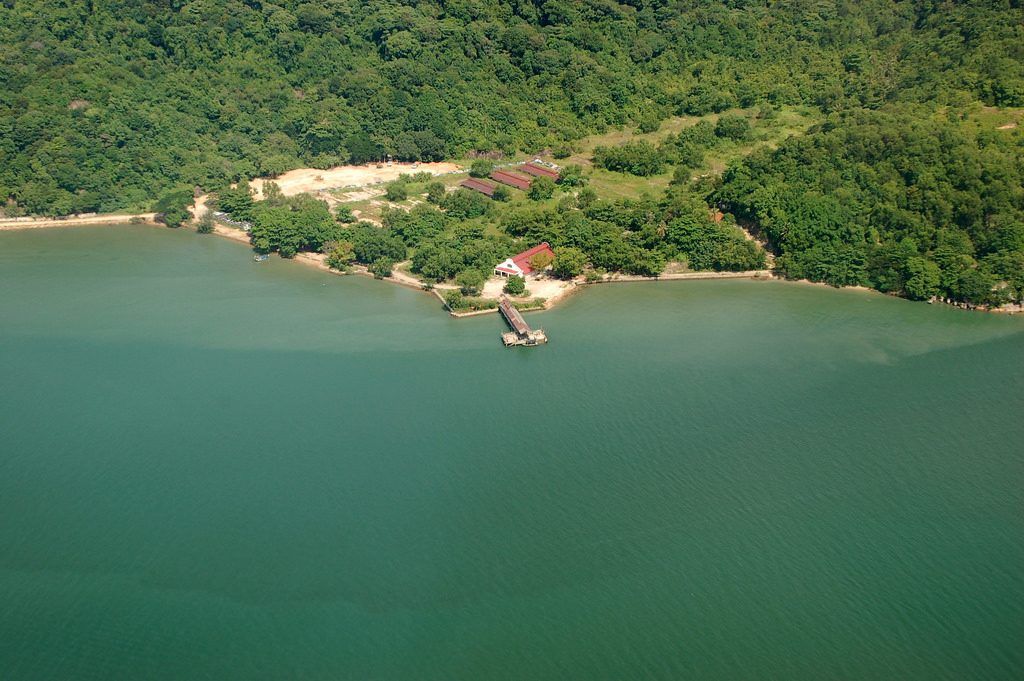 With a stunning peak overlooking the forest around it and, on a clear lucky day, a view that stretches as far as the neighboring state of Melaka to its sea straits, it is a wonder that this place isn’t as popular as some other mountains in Peninsular Malaysia. Full of local folklore and rich history, the old mountain remains untouched by orchard plantation works – allowing old stones and giant trees to thrive undisturbed, preserving unique forest life for the past century. The climb is moderate, with many vertical ascents and winding jungle paths, so pay attention to the markers and pack some energy food for that sweet picnic at the peak. 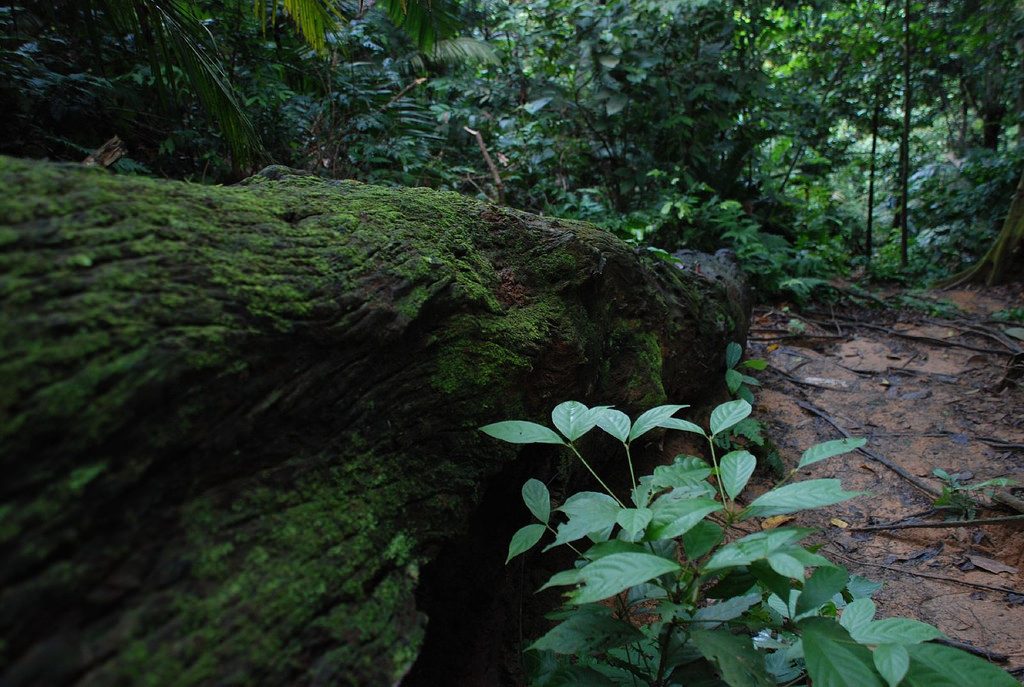 The beauty of a dairy farm nestled at the foot of a great mountain may be closer than you anticipated. Save a trip to Holland or New Zealand by visiting the Desa Diary Farm in Kundasang, Sabah, where fat black and white cows graze on green grassy knolls in cool weather with some goats. The dairy farm provides exciting insight into how fresh milk is supplied and treated before being shipped away, and how the cows live in order to produce only the freshest quality. Also to enjoy besides feeding cute calves and goat kids are milk-filled treats such as ice cream, yogurt and cheeses all locally produced and flavored with Malaysia’s favorite tastes. 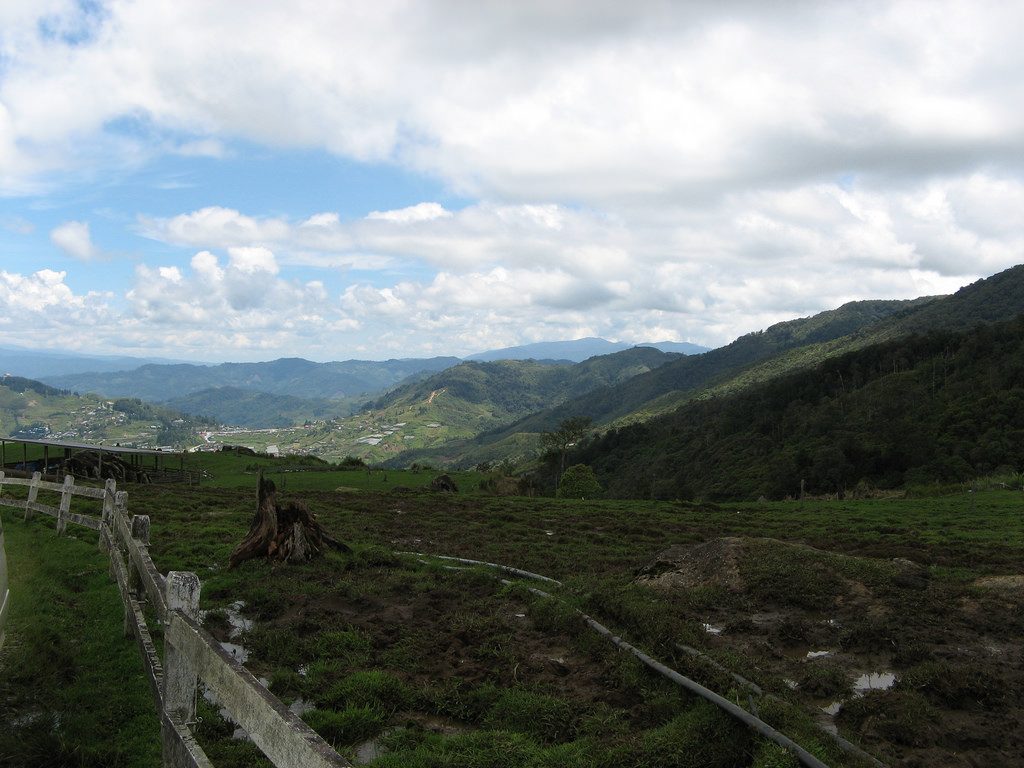 Park
Pulau Tiga | © Paul White / Flickr
Despite its 15 minutes of fame as one of hit TV show Survivor’s locations, Pulau Tiga Park islands remain a less visited destination, possibly due to high wave erosion that has resulted in one of the three becoming a sandbank. Don’t let that deter you however, for the entire cluster of islands have so much to offer besides a picturesque patch of white sand surrounded by crystal clear blue water. Bathe in rejuvenating mud from passive underwater volcanoes that formed the islands and snorkel over seven kilometers of thriving coral reefs. Be a little wary however, as one of the islands are a known breeding ground for sea snakes which are more often than not quite venomous.
More Info
Open In Google Maps
Kuala Penyu, Sabah, Malaysia
+6087884695
View menu
Visit website
Visit Facebook page
Send an Email
Give us feedback

Hindu Temple
Inside the temple | © Georgia National Guard / Flickr
Temples around Malaysia are always an exciting sight to behold, as the many multicultural, multiple religions have added so much to the country’s landscape. Among the stunning places of worship is the Arumigu Sri Rajakaliamman Hindu Temple, Malaysia’s only glass temple, which also happens to be the first of its kind in the world. Inspired by the way sunlight dazzles off glass, the temple has been furnished with glass tiles and mosaics, creating a beautiful crystal chamber interior. While the temple is mainly of the Hindu faith, statues of other religions are also present in the area to symbolize the harmonious interfaith of Malaysia’s people and encapsulate the messages of peace and love every religion professes.
More Info
Open In Google Maps
Jalan Tun Abdul Razak 1/1, Wadi Hana Johor Bahru, Johor, 80300, Malaysia
+6072245152
View menu
Visit website
Visit Facebook page
Send an Email
Give us feedback

This privately owned island is the ultimate secluded getaway. Relying on self-sustaining, eco-friendly methods for power and water, the tiny island’s only resort encourages visitors to spend more time out of the air-conditioning and in the beautiful blue waters. If lucky, the time you visit would coincide with the turtle laying season; and Gem Island’s quietness and peace is more popular for the turtles than the noisier, tourist-filled nearby island of Redang. Rest and relax away from the horde of honeymooners and families and detach from the internet on this hidden ‘gem’ of a simple yet luxurious seaside holiday. Either with a select few or just on your own, this place is ideal for a well-deserved and uninterrupted vacation.

This quiet beach side front is known for its romantic folklore of being a place for lovers to declare their romance by moonlight, hence the name of the beach. Located in the more traditional part of Malaysia, the beach offers simple Kelantanese treats of fried seafood and kite-flying. The trip to the beach from capital city Kota Bharu is an absolute scenic delight, with many little old villages and friendly locals living peacefully on the simpler side of life. While it may not be as elaborate as some beach attractions, enjoy the tranquillity of the sea breeze and sunsets while eating a hearty bowl of signature Kelantanese crab noodles. Be mindful that some parts of the beach may be unsuitable for swimming due to high currents and that large boulders have been set up to combat the unfortunate occurrence of erosion. 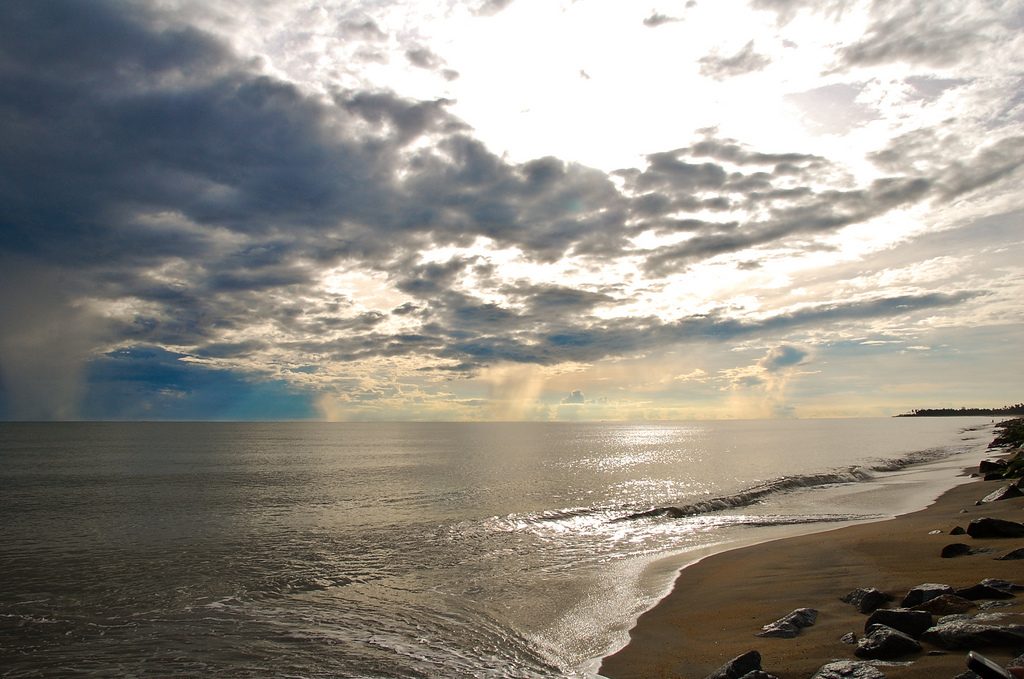 This extremely seasonal attraction in Kuala Selangor’s straits is worth the wait, as sand flats mirroring the beauty of Bolivia’s reflective salt flats have earned the place’s nickname of Sky Mirror. Spend a whole day learning about the types of sea life that live in such densely packed sand, such as the huge variety of shellfish and crabs. The locally available tours also provide education on how the sea moves in the coast and how the waters and weather affect life from the tiniest star fish to the people on the higher shores, and how being mindful of ecosystems and their care would bring positive impact to the whole community. As the natural mirror is reliant on sea and sky conditions, this trip has to be planned carefully; otherwise the day can be spent snacking on seafood and visiting other attractions in the area like local temples and fishing villages.