The Travelling Library of the Mekong: Literature Projects in Laos

High illiteracy rates and poor access to education are having a catastrophic effect on Laos’ youngest generation. Liana Mellotte takes a boat trip to some of the most remote villages along the Mekong river to see how local libraries and NGOs in Luang Prabang are trying to solve the problem and give Lao children a chance to read, learn and engage with their cultural heritage. 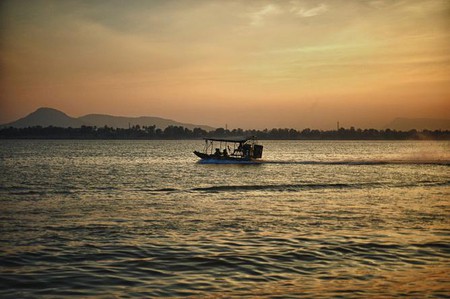 The scent of frangipani lilts in the air as the hot sun beats hazily down on the scorched orange earth below. The low thrum of our longboat’s engine gently lulls us as we putt along the Mekong river, lush green clad mountains dominating the landscape and sloping arid farmland punctuating the water’s edge on either side.
Laos is a country still very much gripped by a state of flux. Its position, nestled in between noisier neighbours Thailand and Vietnam has oft been its downfall in recent history, especially during the second Indochina war when its proximity to the latter brought it the dubious accolade of becoming the most bombed nation in the world.
However, since its liberalisation laws in the late 1980s and increased structural investment from western governments, NGOs and financial institutions, Laos is developing a voice of its own in this increasingly industrious corner of the world. Of course, progress at such a sharp pace brings its own challenges and the Lao government looks to balance maintenance of their culture and traditions with the opportunity that industry and increased independence from western aid can bring its people. 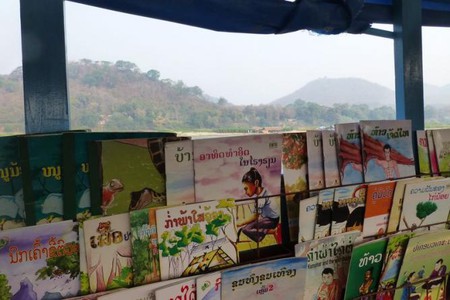 Education is an area that will need some focus if Laos is to compete on the scale of its regional bedfellows. In most cases, children here only attend school if they don’t have younger siblings to help care for. This leaves the nation languishing in the literacy stakes at 73%, on a par with Cambodia but dwarfed by all four other neighbouring nations that land lock it.
As a result, there are some fascinating community literacy projects underway across the country, most notably in the beguiling northern city of Luang Prabang, the former royal capital from which we set off in the hazy dawn.
We are on a very special mission which is the brainchild of Luang Prabang Library‘s Chantha Souliyasak in partnership with NGO Community Learning International founded by American Robert Anderson. The longboat we are travelling in doubles as a veritable floating library which is taken out to 104 of the most remote, and subsequently disadvantaged, villages along the Mekong and Nam Ou rivers. 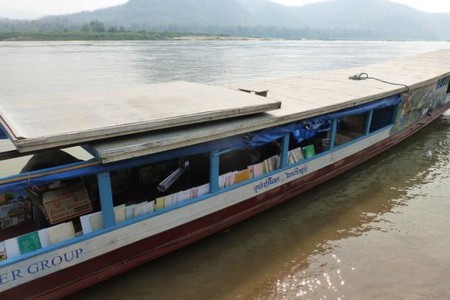 As we sit cross-legged, surrounded by rows of Lao and bilingual books, Chantha tells us about the project which has learning centres in 6 regions across the country employing over 25 staff. In these centres, boatmen and locals are trained in sanitation, hygiene, activities and games that will further the project’s impact.
One of the staff is a byproduct of the literacy programme, 23 year old Sinxai who has been working with Community Learning International as an ‘animateur’ full time for four years. He has all the prerequisite attributes needed for a challenge as seemingly insurmountable as this; a contagious smile, bags of drive and a clear passion for working with children. He joins us today, along with Madame Seangchan who is in her 12th year as an ‘animateur’. Between them they ready the handmade puppets and games, while regaling us with tales of extended trips where they travel for days on end to reach the farthest villages, sleeping on the rough rug-lined boat floor each night. 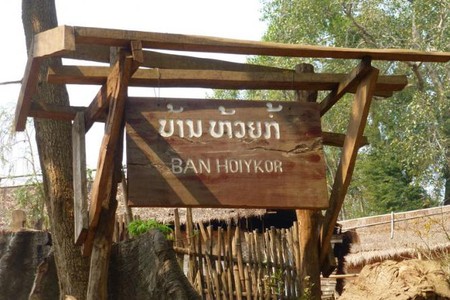 Our destination is the village of Ban Hoi Koa. Hundreds of boats chock full of tourists pass this village daily on their way to the nearby Buddha-filled Pak Ou caves at the confluence of the Mekong and Nam Ou rivers, but none stop. Here, in the shadow of a dramatic karst rock formation, the population of 300 constituting 70 families live in extreme poverty just two hours from Luang Prabang, a city which pulsates with industry, culture and tourism. Here, the Mekong is their lifeline to supplies and resources.
The children of the village are expecting us, and as soon as our boat, adorned with children’s illustrations, drifts into view they run down the slope towards the river giddy and exhilarated, eyes wide with excitement. This sight alone is enough to bring a tear to the eye and rivals any child’s reactions I’ve seen opening a gift on Christmas morning. Their gift is the gift of literature, and rightly they hold it in high esteem.
Dressed in their school uniform of white shirts with girls in black wrapped linen skirts with woven trim and boys in trousers, they greet us with a traditional welcoming Laos song. Once we take respite from the sun under the thatch-roofed structure in the centre of the village, with hens clucking round our feet and goats darting by, the children line up by age. Children who don’t go to school yet wear oversized uniforms, such is their eagerness to be involved. 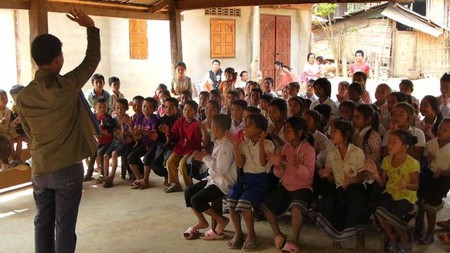 Sinxai and Madame Seangchan lead the educational activities including games and stories. Hand-painted characters and props taped to bamboo help them play out the tales. Then they host a sing-along which teaches about staying healthy through good hygiene. This part is in cooperation with Eau Laos Solidarité who focus their efforts on providing running water system and toilets in remote Laos villages and educating local schoolchildren in sanitary matters. 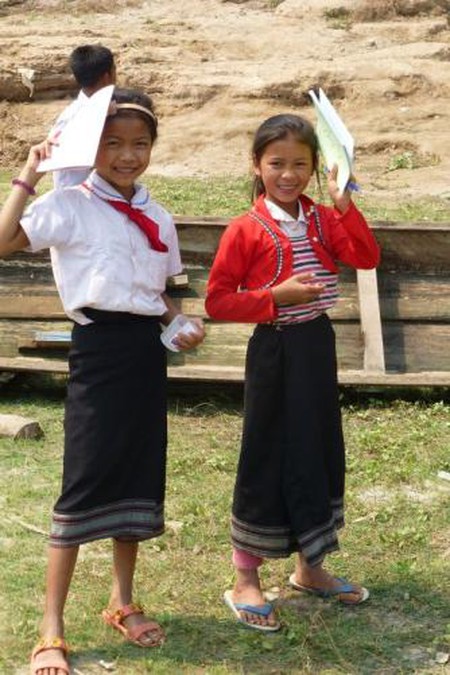 To that end, they have already published a book called We Love A Clean School on the subject, which they have distributed for free amongst the villages in the province, a first in Laos. The book has a song which the kids know verbatim along with the hand actions which accompany it. Author and founder of Eau Laos Solidarité, Sally Piper Pillitteri, is with us today and tells us that the unique partnership came about 6 years ago when she first met Chantha who talked of a need for an eye-catching book that would teach kids to wash their hands with soap, only drink clean water and always to use a latrine.

After class is over, the kids troop merrily down to the boat where they are allowed to choose one book to keep until the floating library returns. Heartbreakingly, the last time it visited this village was a year ago, and with resources as stretched as they are at Community Learning International, it could be the same wait again for the children of Ban Hoi Koa.

Before we embark the ‘Book Boat’ we hand out textbooks, storybooks, pens and soap to each child as they stare hungrily at the piles of supplies. Each child clings to their spoils as though their lives depended on it, many already taking a seat at the foot of the village steps to begin reading aloud to themselves. It is the sound of their voices that follows us as we slip away upstream.

Visitors to Luang Prabang Library can donate anything from $2 USD upwards to buy books, school uniforms, bicycles, hula hoops and skipping ropes. For $300 USD, you can join the ‘Book Boat’ as they distribute much-needed basics to those who need it most. For more information, visit the websites of Community Learning International and Eau Laos. 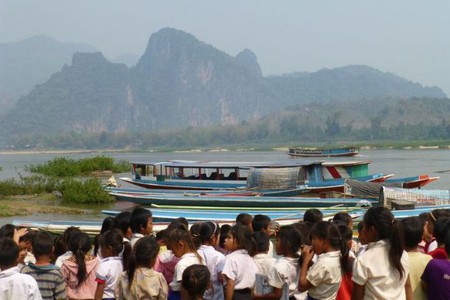 © Liana Mellotte
Give us feedback