The Tastiest Street Food on Offer in Luang Prabang, Laos 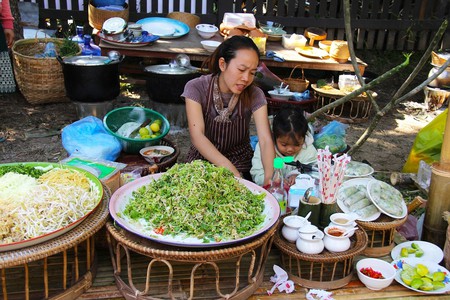 Luang Prabang is the jewel of Southeast Asia. The former capital of Laos is full of temples, culture and a strong food tradition. Travelers can drop a pretty penny in one of the fine dining restaurants located between the Nam Khan and Mekong Rivers or venture to one of the many street food stalls in the night market or throughout the city to taste the local fares.

Tropical fruits such as dragon fruit, limes, mangoes, and melon abound in Laos. Some guide books warn against purchasing these frozen treats because they are made with ice. However, the overwhelming majority of ice in Laos is purchased from companies that produce ice in a factory with purified water. Make it known ahead of time if you want the barista to skip the MSG. Try the avocado shake with condensed milk. Delish. Or in Lao, “sep lai.” 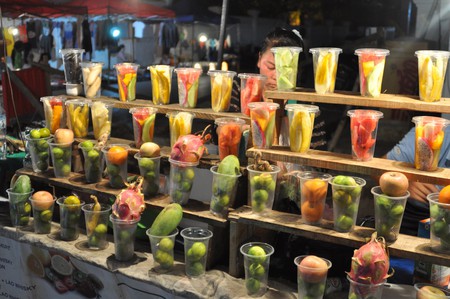 Pork and beef sausage is a specialty of Luang Prabang. No wedding or ceremony feast is complete without the savory addition of these encased meats. Served warm and eaten alone, or with sticky rice, peppers and ginger, Luang Prabang sausages harness the flavors of lime, garlic, ground pepper and lemongrass. Some types of sausages are “soured.” These meats have sticky rice inside the casing in addition to meat and are left at room temperature for several days to alter the flavor. 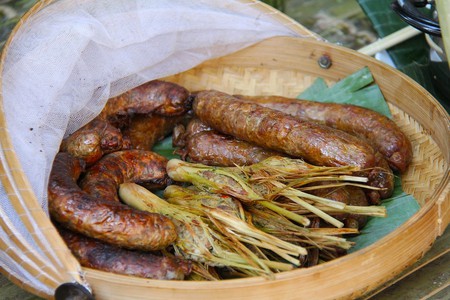 “Ka nom kok” or coconut pancakes are a dessert food commonly found around Luang Prabang. The batter is made with coconut milk, sugar and rice flour and cooked over hot coals in a round cupcake-esque baking sheet. The two halves are cooked separately then sandwiched together to make bite-sized sweets. A bundle of ka nom kok is served up in a bag or wrapped in banana leaves and eaten by hand or with a toothpick. 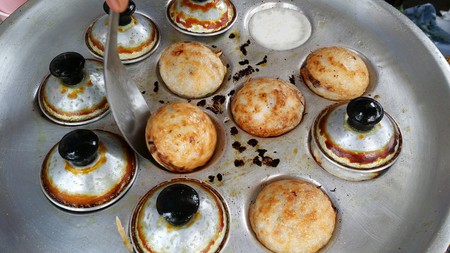 The stinky-sweet durian is a favorite in southeast Asia and Laos is no exception. Durian’s milky yellow meat is loved by some and loathed by others. You have to try it for yourself before you decide. The smell and taste are not the same. Find durian in it’s spiky skin sold whole or opt for a prepared tray wrapped in plastic. Because of its strong smell, durian is banned from many indoor locations, so enjoy it on the street. 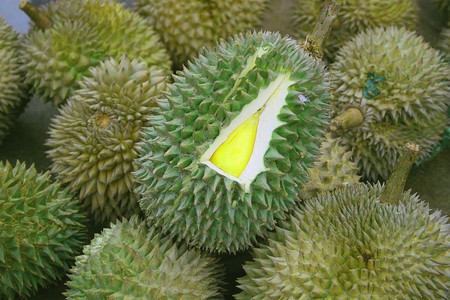 Cassava is used to make tapioca and is a staple in Lao. Called “man ton,” farms throughout the country produce the plant and process it into starch. It’s used in the production of kopiak noodles for soups and to make jellies found in desserts and bubble tea drinks. Black rice is also used in Lao desserts like mango sticky rice where it’s mixed with coconut milk and served with fresh mango. 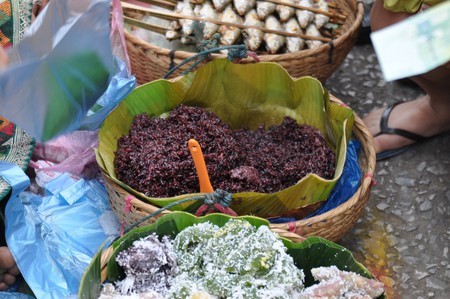 Lao people are known to eat organs, skin and other animal parts that are usually not included in western cuisine. Stalls barbecuing meats over open coals will start early in the morning and carry on after the sun goes down. Choose the pice of meat you’d like (usually on a skewer or sandwiched between two bamboo sticks), and it will be reheated for you on the grill. Whole chicken, slices of pork and beef or whole fish are favorites. 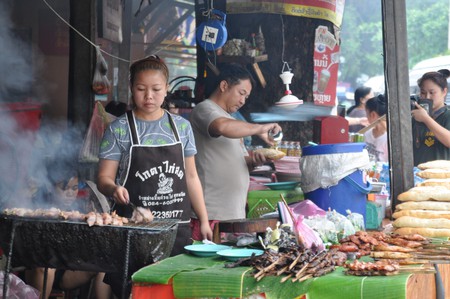 A series of three grilled eggs or “ping kai” on a skewer is a filling and easy street food snack. The eggs are washed and a hole is carefully punctured at the top preserving the shell. The yolk and whites are whisked and seasoned with pepper, fish sauce, spring onions and other flavor enhancing ingredients. The mixture is then poured back into the egg shell to be grilled to the consistency of a hard boiled egg. 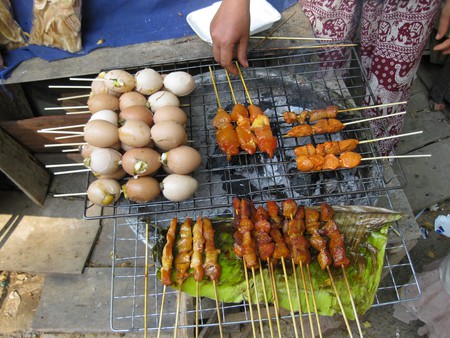 Grilled bananas are sold by the bag full off the streets in Luang Prabang. The bananas in Laos are small and sweet and while they can, of course, be eaten raw, they are especially delicious when heated over coals. Especially popular as an early morning breakfast food or mid-morning snack, the bananas are often prepared alongside grilled sweet potatoes and corn. 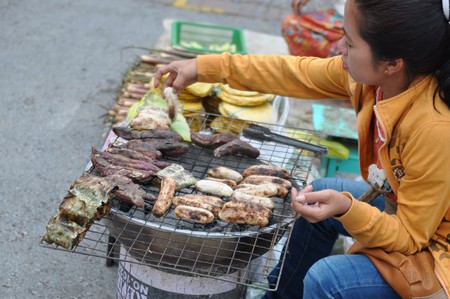 Is whiskey technically street food? Does it matter? “Lao lao,” or Lao whiskey, can often be found with dead reptiles, insects, plants and herbs inside the bottle. Part litmus test for the strength of the liquor and part traditional medicine for ailments such as joint pain, one of the best places to find such curiosities is near Luang Prabang in Ban Xang Hai where much of it is made, but bottles can also be found at the night market in town. 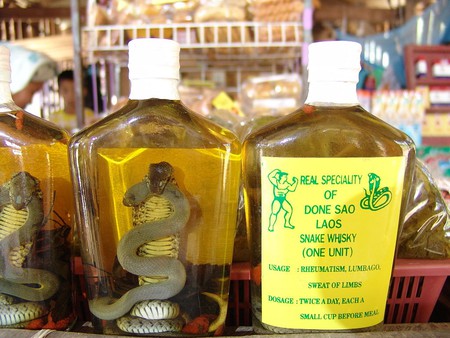 Snake Whisky | © By Portmoresby/WikiCommons
Give us feedback