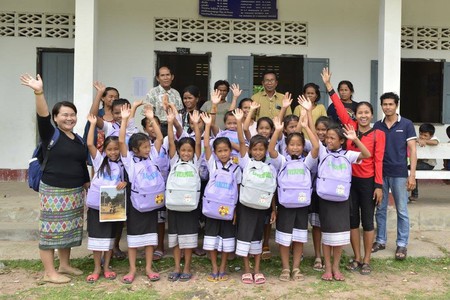 In rural Laos, poverty and low education levels leave residents, especially young women, susceptible to human trafficking. Girls often drop out of school to marry early or work and too often end up in Thailand’s commercial sex trade. The Lotus Education Fund was started in 2008 by Australian educator Dianne Gamage and her Lao counterpart Dr. Phoudalay Lathvilavong to promote educational opportunities for girls in Savannakhet Province.

Laos is one of the least developed countries in the world. International surveys estimate that between 200,000 and 450,000 people are trafficked annually within the Greater Mekong Subregion, many coming from Laos. Most Lao migrants move to Thailand voluntarily at first due to proximity, cultural similarities and better economic conditions. Once those being trafficked illegally cross the border, they are often tricked, cheated or forced into exploitation situations. About 90% of trafficking victims from Laos are girls 12 to 18 years old.

Since 2008, the Lotus Education Fund has sought to change these statistics by supporting girls with school registration, uniforms, books and school supplies. Statistically, every additional year of schooling results in a two-year delay in marriage. Over 80 families have benefited from the program and the Nongkalong school in the village where many of the girls live now has toilets, and a water tank is being built to provide students with clean drinking water and a hand-washing station. Lao Rugby works with Lotus to promote teamwork and a healthy lifestyle through exercise.

“Ideally we would like to empower the Lotus girls and teachers as members of our Lotus advisory board so that they are making the decisions that best suit the women and girls in their community,” said Gamage, who has led three life skills workshops with the sponsored girls and plans to lead another in 2019. Lotus partners with The Asia Foundation in the implementing the life skills program.

Working in partnership with World Vision and their Safe Migration toolkit, the Lotus Girls learned about human trafficking and created a drama to share with their peers at school. The focus on life skills and especially health information about puberty and menstruation has helped them gain self-confidence and imagine a bright future for themselves.

Dr. Phoudalay offers paid employment and mentoring for eight weeks during the summer holidays where girls can earn money for their families in a safe environment while learning valuable agricultural skills.

Lotus Women’s Wellness Workshop participants in rural areas in 2016 indicated that they didn’t know why they menstruated or have the resources to properly care for themselves, resulting in absenteeism from work and school during their periods. Lotus collaborated with Green Umbrella in Cambodia to start Generation Education Period, a project that provides rural women with reusable sanitary products and workshops on how to use them. Currently the sanitary kits are produced at Sengsavan in Savannakhet, a French NGO that provides recovery services and education to women rescued from human trafficking.

As with any program, not everyone makes it through. Some Lotus girls have dropped out, often due to family pressure and economic reasons. The hope is that by simply completing their primary education, these girls will have better skills to make responsible decisions for themselves and hopefully prioritize educating their own children. The girls who remain in the program understand the value of education as a driver of change.