The Ancient Mystery of Laos' Plain of Jars 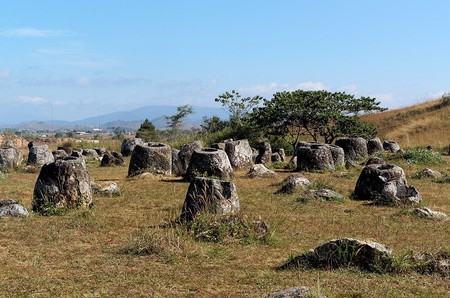 Xieng Khouang is a beautiful province in the northeast of Laos on the Vietnam border filled with misty mountains, hot springs and thousands of megalithic vessels used in funerary rites called the Plain of Jars.

While Xieng Khouang province was heavily bombed during the war, there are now plenty of sites that have been cleared of explosives and are safe to visit.

An ancient civilization related to the Khmu tribe created megalithic urns to decompose corpses prior to cremation or burial. Several myths, such as the jars were used to store rice wine, that they are the cups of giants or that they were made of poured concrete and baked in giant kilns, have been dispelled – but locals still like to share these legends. French geologist Madeleine Colani led the first scientific study of the jars in the 1930s. Today, the Lao government in conjunction with organizations such as UNESCO are working on conserving the sites for future generations. 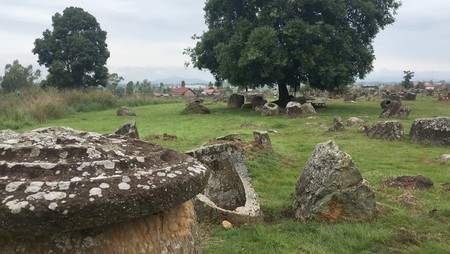 The visitor center at Site 1 gives a great overview of the history of the jars and the region from prehistoric times, through war times and up to present day. Ride the electric carts from the visitor center to the jar site and see the largest “King” jar at any of the sites. Bomb craters litter hills but MAG has cleared this site and others. Look for the path markers on the ground. A cave at the site was likely used for cremations. Stop by the Navan Handicraft Shop for textiles, wood carvings and sundry foodstuffs. Nearby Site 1 is the Phu Kheng Jar Quarry where visitors can hike the 1,000 stairs to the summit and enter a cave used as a hideout during the war. 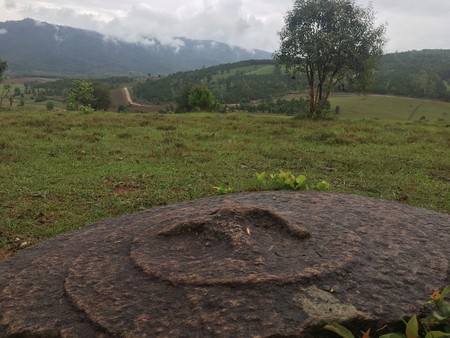 Site 2 is near Ban Lat Houang and has 93 jars atop a ridge looking over rice paddies and villages. One cluster of jars is in the open and the other is in a shady grove where trees have grown into some of the jars. The longest of the 1,999 stone jars was discovered here. Stop by Ban Napia, also known as “spoon village”, where artisans have been using backyard forges to turn scrap aluminum into spoons since the 1980s. In the past, the spoons were made from downed aircraft and bomb casings but are increasingly made from other sources. 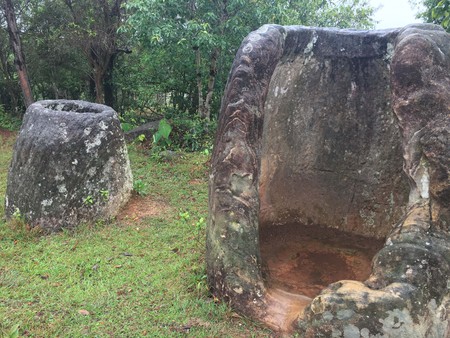 Site 3 is near Ban Xieng Di. A temple and ticket office mark the start of the path that meanders through farm land and rice paddies eventually climbing a hill to an intimate jar site of 150 jars. Bring shoes you don’t mind getting wet, especially in the rainy season. Being a good steward of the archaeological site means refraining from climbing on the jars, littering, graffitiing or picnicking at the jars sites. 77 sites have been surveyed and as the UXO are cleared, more sites will be open to the public.

The Plain of Jars sites are accessible from the provincial capital of Phonsavan. Lao airlines offers a daily flight between Vientiane and Xiengkhouang airport. Both daytime and night buses are available from Vientiane and Luang Prabang. For travelers coming from Vietnam, visas on arrival are available at the Nam Ka border. From Phonsavan, visitors to the jars can rent a motorbike or join a group tour from one of the many tour operators in town. Private drivers can be hired as well.

While the jars themselves are as impressive as they are mysterious and not to be missed, there are plenty of other great attractions around Phonsavan. For history about the Lao Civil war and the unexploded ordinance still affecting families today, check out the Provincial Cultural and Tourism Department, the Mine Advisory Group office and galleries and the Quality of Life Association, which is run by UXO survivors.

Wat Pia features an impressive 16th century Buddha and just out of town is a mulberry silk farm where visitors can take a tour of the silk production process from worm to textiles. Lao Falang Restaurant has incredible Italian food and also rents out motorbikes. Cranky-T is a coffee shop by day and bar by night with great food choices, and a part of the proceeds from Bamboozle goes to Lone Buffalo’s literacy and job readiness programs. 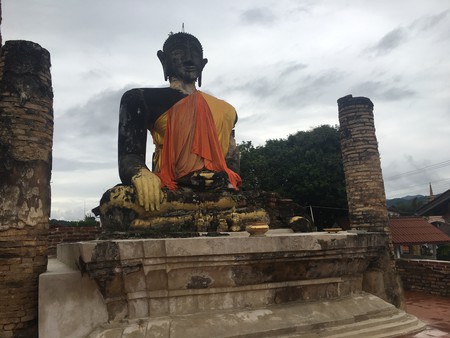 If you plan to spend a few days in Xieng Khuang, consider getting out into the province to see more of the province’s natural beauty. A driver can be hired for an overnight excursion. Check out Piu Cave, where many citizens died when a missile was shot into their cavernous hide out, and the two hot springs 67 km from Phonsavan, each of which has accommodations. Nong Tang Lake has beautiful scenery and a hike to Buddha Cave (Tam Pha) filled with religious figurines. 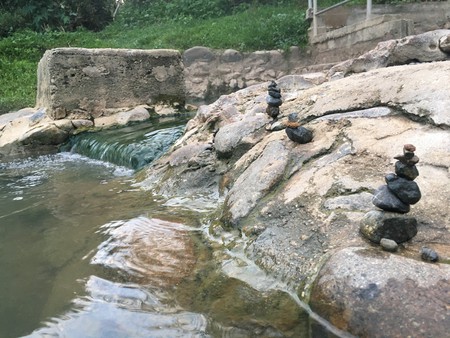 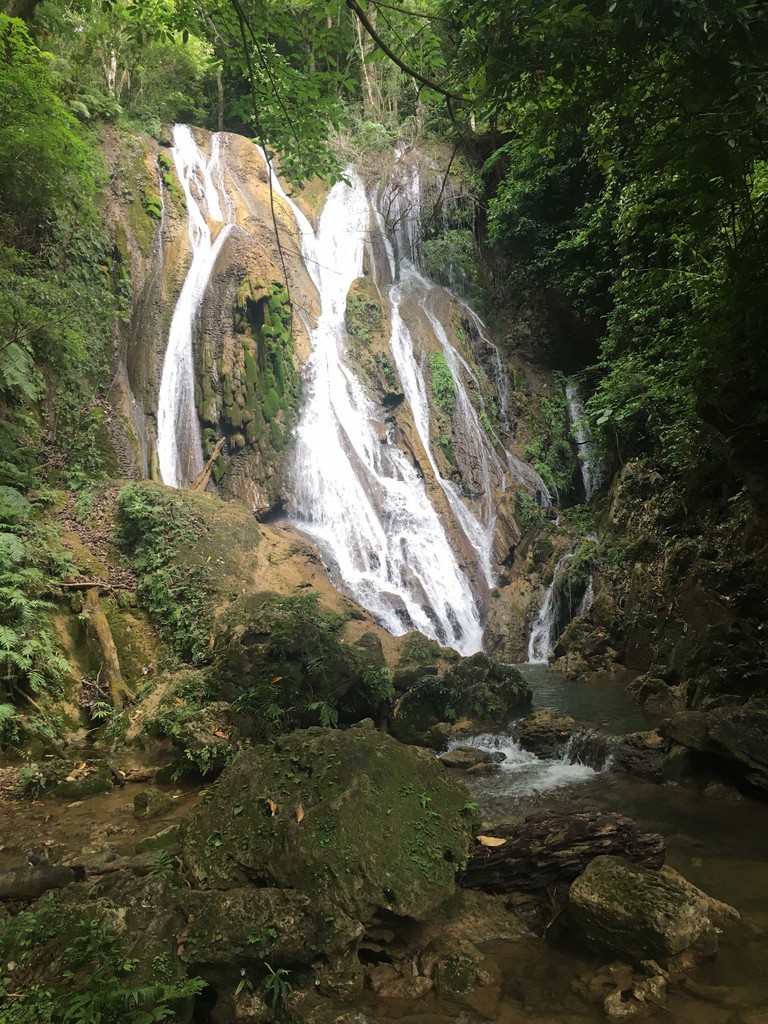 Near Ban Tajok is an impressive waterfall with 30 tiers and a well-kept adventurous jungle trail that crosses back and forth through the water. If you arrive on motorbikes, drive to the right at the “waterfall” sign at the fork in the road to park at the top of the trail and walk or hitchhike down the steep dirt road to the basin. The basin has picnic areas, bathroom and small shop but is not accessible without 4-wheel drive, especially after rain. This off the beaten path adventure gives Kuang Si a run for its money in terms of spectacular views, amazing hikes and the added bonus of no tourists in sight. 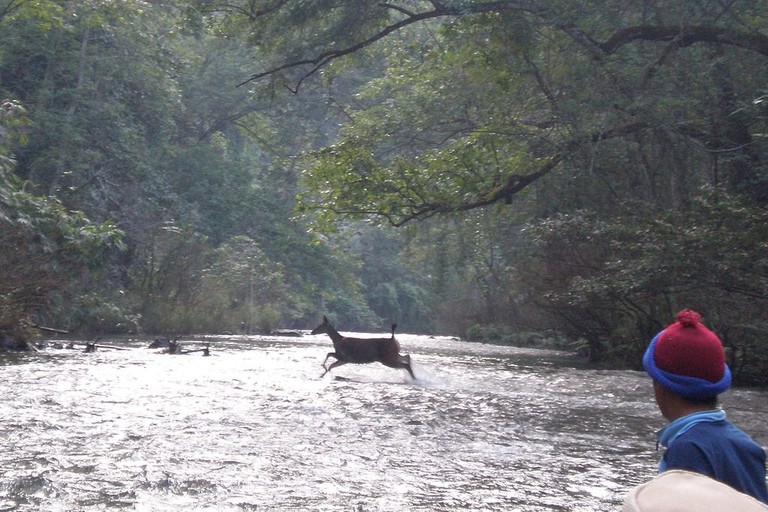 For those interested in seeing the wildlife, the Nam Et-Phou Louey National Protected Area is the largest of its kind in the country and is in the north-east of Laos. The Nam Nern Night Safari is a 24-hour tour that takes visitors from Phonsavan on a traditional long-tail boat ride during the day and offers some great nature activities that include birdwatching, wildlife tracking, nighttime wildlife spotting, medicinal plant exploration and easy hiking.